Thomas Hardy was a 19th century novelist and a 20th century poet. As a novelist, he was last of the great Victorian novelists such as William Thackeray, Charlotte and Emily Bronte, Charles Dickens and George Eliot. The last decade of the 19th century was dominated by Thomas Hardy. He wrote 14 novels and almost 900 poems. Hardy’s reputation as a novelist grew during the last decades of of his life and his poetry was relatively neglected. His novels share a pessimist view of the human condition and life.

Don't use plagiarized sources. Get your custom essay on
“ Thomas Hardy: Novelist And Poet ”
Get custom paper
NEW! smart matching with writer

Pessimism is derived from the Latin word ‘Pessimism’ (worst). It is based on a belief that the world is the worst possible and that things are bad and tend to become worse. Thomas Hardy worked out a pessimist theory of his own according to which man is just a puppet in the hands of an inscrutable and malicious force which governs the world and seems to enjoy inflicting endless sufferings. The fact that Hardy resented being called a pessimist is no reason why should not be thus described.

Hardy was the painter of darker side of life as it was no wonder if people charge him of ‘pessimist’. The opinion is both right and wrong in this context. In fact, there are some factors that compel us to believe him a pessimist. He was hyper-sensitive, his own life was tragic and gloomy. For a speculative soul, this world is a thorny field. Thomas Hardy captured the heartbeat of the rural English people against the looming backdrop of encroaching industrialism.

His novels have a genuine, almost autobiographical feel because he used many personal experiences, acquaintances, settings and opinions in his fiction. Thomas Hardy’s pessimism also represents actual events. Relationships and social issues of Hardy’s life. Hardy’s fatalism and pessimism began to manifest itself in his early childhood, as he was the result of an unplanned pregnancy, and then later in his youth, when his family could not afford to fund a full education. As he grew into adulthood, Hardy began to feel acutely the line drawn between him and those of a higher class.

His despairing relationships with two women, his cousin Tryphena Sparksand his first wife, Emma Lavinia Gifford, were the inspiration for the futile plotlines of his three novels. Because of the harsh society in which he lived, his lack of money, two unhappy relationships, and the failure of his last two novels to be accepted by his readers; (due to their anti-marriage, anti-social and anti-religious material), Thomas Hardy emerged as a pessimistic novelist and poet of the 19th century.

Because of autobiographical touch in his novels, some of the Hardy’s heroes and even heroines adopt his personal qualities and go through some of the same life situations that he did. Additionally, many of the Hardy’s female characters are extremely similar to the lovers and friends he had throughout his life. Hardy personally felt the crushing pressure of the Victorian society, namely its rules and regulations concerning love and marriage. Hardy, and therefore, his characters often rebel against this society, making decisions that contradict the expectation of their society.

Many times, Hardy felt that he was an outcast in his society, partly because his religious beliefs did not match up with the church’s, but also because his social thoughts and actions were more progressive than his counterparts. After experiencing years of disagreement with the England of the 1800 s and having a marked desire for progression, Hardy became understandably morose. His novels became increasingly dismal and pessimistic and it is for this fatalistic tone that he is greatly remembered. The Victorian age was an age of doubt, of contradictions and conflicts. This fact too shows its impact on the writing of Hardy.

People were to live by the Bible but many took it in the strict sense and followed the literal words strictly we see in ‘Tess of the D’Urbervilles’ how Tess is treated unjustly by the society, which followed the law in words and not in spirit. The gloomy effect of his age plays an important role in his writings. Doubts, despair, disbelief, frustration, industrial revolution, disintegration of old social and economic structure, Darwin’s theory of evolution were gthe chief characteristics of that age. All these factors probe deep into his writings, and heighten the somber , melancholic and tragic vision.

His pessimism is also the outcome of the impressions that he receives from villager’s life. There were plenty of tragedies in the life of the poverty stricken Wessen folk, as shown in this novel ‘Tess of D’Urbervilles’. Hardy’s philosophy of the human condition is determined by his natural temper and disposition, He says: “A man’s Philosophy of life is an instinctive, temperamental matter. ” Hardy, practically, excludes from his writings the sense of splendour and beauty of human life completely. Tess’ life is totally devoid of even a single moment of happiness. 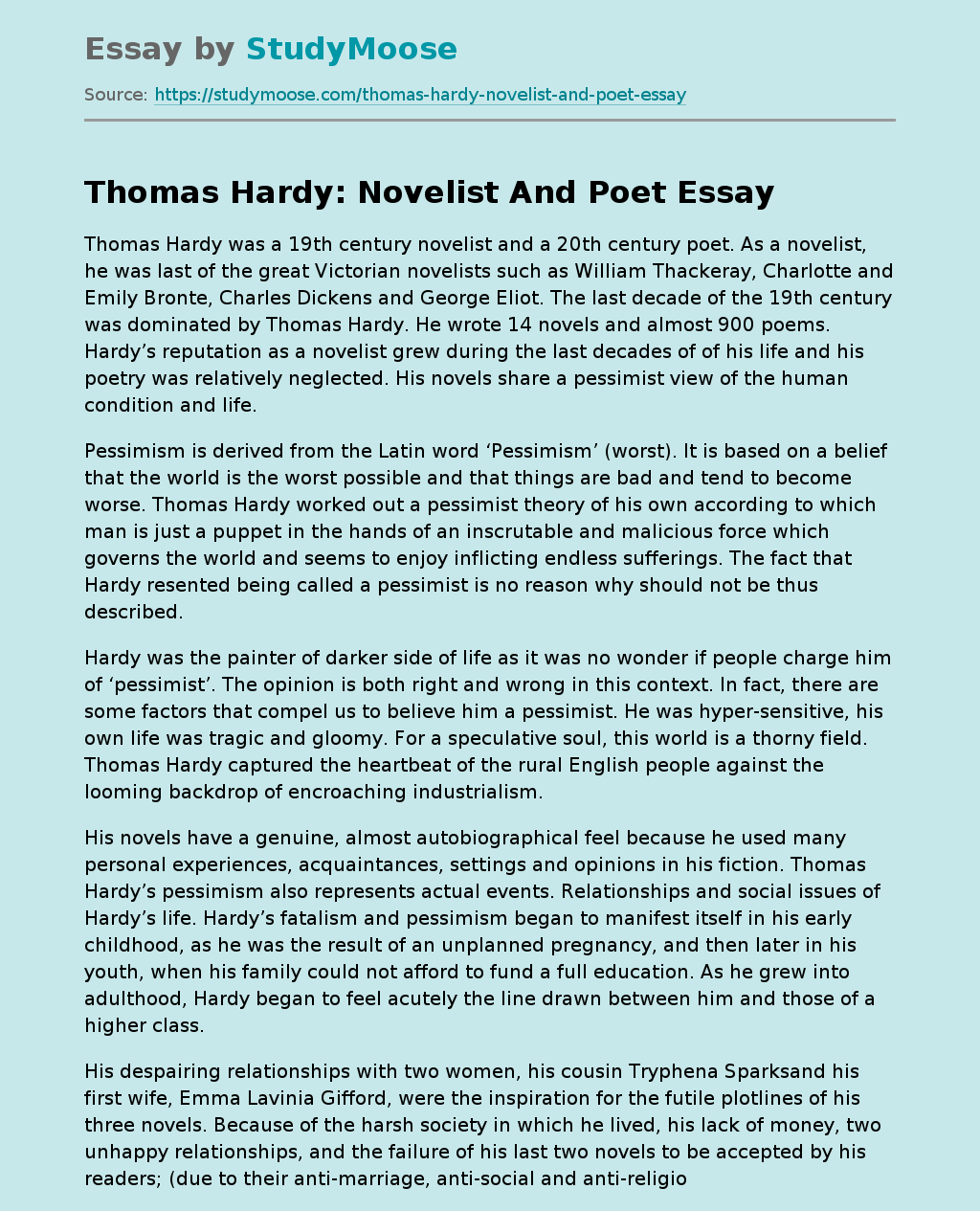