Literary Analysis of "The Going" by Thomas Hardy

‘The Going’ is a poem mourning the death and loss of Hardy’s wife Emma. The themes of anguish, love and regret are echoes throughout the poem however it is unusual and interesting to note that it seems that Hardy is blaming Emma for leaving him and over-romanticizing the time they spent together. The title ‘The Going’ gives the air that Emma’s death was a grand sort of departure.

A reader with no knowledge of Hardy’s life would perhaps feel that Hardy loved and took much care of his wife throughout his life and her departure was ‘grand’ in that way, however this is not the case.

Don't use plagiarized sources. Get your custom essay on
“ Literary Analysis of “The Going” by Thomas Hardy ”
Get custom paper
NEW! smart matching with writer

The circumstances Emma died in illustrated a harsh husband who did not come to his wife’s deathbed when the maid told him Emma was very ill – Hardy’s grievous poem makes the circumstances are very ironic. In the second stanza, Hardy also refers to Emma’s death as the ‘great going’, which is once again giving the idea that Emma’s death was grand; like a Queen leaving.

It is possible that by glorifying and exalting Emma’s death, Hardy is trying to console himself about the circumstances she died in – by writing over the situation he may be trying to change the story of what happened for the reader in order to make it seem as though he is not the one to blame. Building on the idea that Hardy wants to shift the blame from himself, Hardy throughout the poem asks questions as statements rather than as real questions.

For example, he says ‘ Why do you make me leave the house / And think for a breath it is you I see…!

‘ – Hardy has not ended his sentence with a question mark but rather he has ended with an exclamation mark, suggesting he in reality does not want to ask Emma these questions, instead he wants to tell her how he wants the story to be. By using ‘you’ in all his questions, the air that Hardy is the victim in this situation rather than Emma. This amplifies upon the idea mentioned above that Hardy may be wanting to write over the situation in order to make it seem that he is not the one to blame.

A sense of arrogance and self-righteousness is eluded from his desire to shift the blame away from him – this may make the speaker seem unlikeable. There is a sensual tone in the poem which works to romanticize the mood of the poem and suggest the happy past the couple had in the beginning of their relationship and the happy life they could have had but didn’t. Hardy asks Emma why she did not ‘lip me the softest call’ – this is a reference to physical intimacy and could be a kiss or to whispering ‘sweet-nothings’.

From that suggestion, it would seem like Hardy was always expectant for such intimacy however this was not the case as the couple were not physically intimate for most of their relationship. There are echoes of their courting days in their youth in the fourth stanza where Hardy describes a younger Emma in flattering and loving terms as the ‘swan-necked one’ who would ‘muse and eye (him)’. The idea of Emma ‘eyeing’ Hardy suggests a shy and playful Emma sneaking glances at Hardy which evokes empathy in the readers heart for not only Emma but the combined couple of Emma and Hardy during their courtship.

This only adds to the sorrowful feeling of Emma’s death – but now by relating their courting days Hardy has not only told the reader of his grief but he has also spread this grief to the reader. Alliteration also adds to the playful feel to the poem, building on the point above. The day is described as ‘darkening dankness’ and the alleys as ‘bending boughs’ – this brings the settings to life and illustrates how rich their relationship could have been, thus amplifying the emotion of regret over Emma’s ‘going’.

The alliteration could also suggest that Hardy is attempting to over-romanticize the situation to such an extent that he is trying to convince himself that their relationship was happy. Another interpretation could that whilst this poem is a sad love poem, Hardy’s use of playful alliteration may be demonstrating that Hardy may not be as sad as he is making out to be throughout the poem because if indeed he was terrible grief-stricken by her loss, he would not have had enough composure to compose the poem with such literary devices which make the poem sound more flowing.

Using a device such as alliteration is deliberate and therefore Hardy’s use of alliteration shows he had enough capability to make use of this technique. The final stanza in the poem has great significance to the poem and its meaning. Hardy uses short sentences and caesuras to demonstrate how harshly Emma’s death came about and how harshly their relationship ended. ‘Well, well! All’s past amend/Unchangeable. It must go. ‘ shows how he seems reluctant to accept that Emma is now dead as the short sentences make it sound as though he is slowly trying to make himself accept this fact.

Sharp caesuras in this stanza also make it feel as though trying to convince himself Emma is gone is very painful. To conclude, Hardy uses literary devices such as alliteration and sensual imagery to give a sensual feel to this poem, however the underlying tone and meaning of this poem is a sad and greivious one as highlighted by Hardy’s use of blame and structure. Short sentences and an inconsistent ryhming scheme demonstrate this sad mood.

Literary Analysis of "The Going" by Thomas Hardy. (2017, Aug 02). Retrieved from http://studymoose.com/literary-analysis-of-the-going-by-thomas-hardy-essay 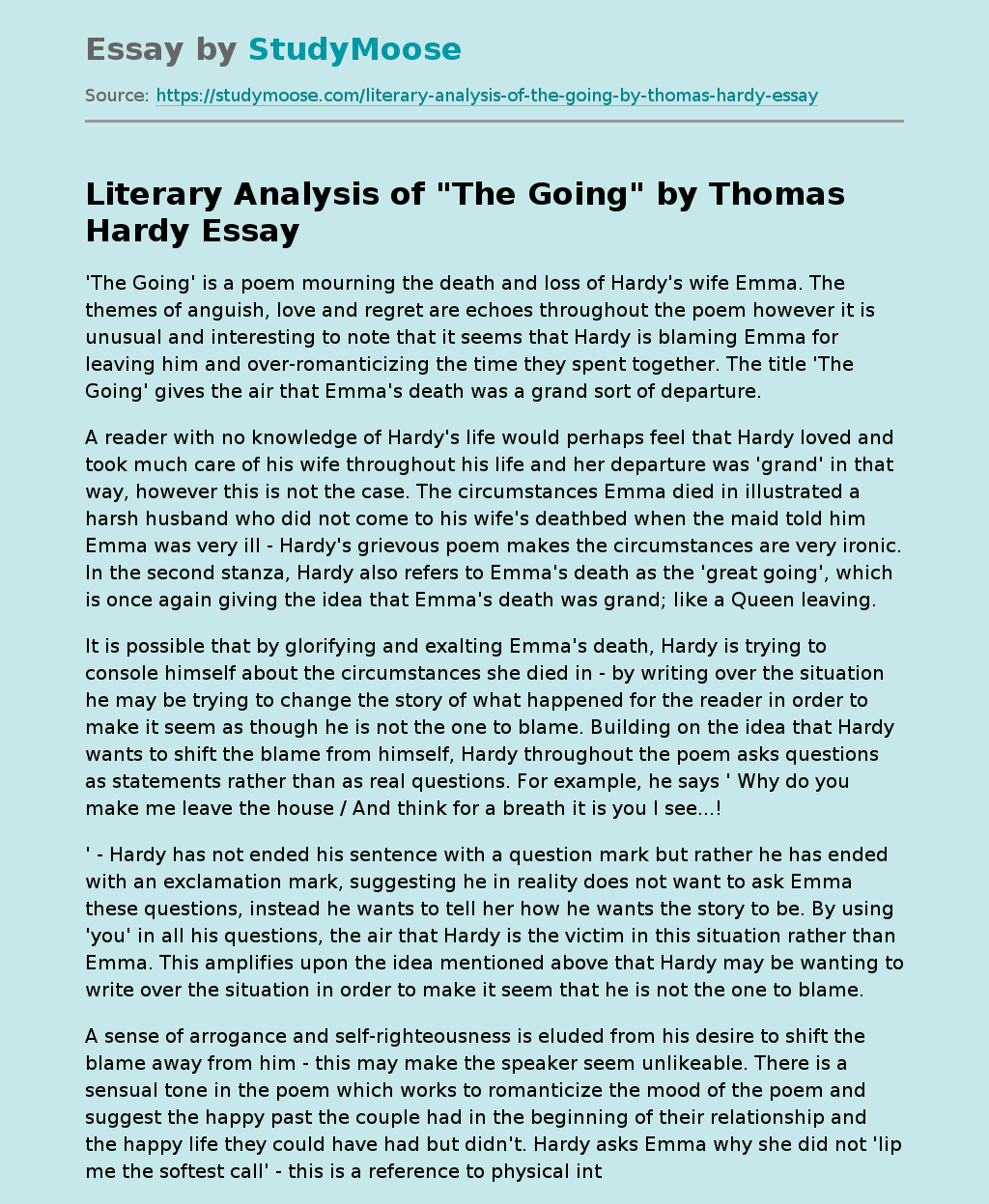