Critical Analysis of Convergence of the Twain Thomas Hardy

“Not even God can sink this ship” —is the infamous line that refers to the Titanic, one of the largest most immaculate man made inventions of its time, and the catastrophic accident that led to its sinking has been a historical bookmark, noted for decades. Thomas Hardy’s perception to this disaster is rather pessimistic; creating a sense that fate was destined to cause the failure of Titanic. Hardy presents a philosophical poem about fate’s inevitability and indifference through the eyes of nature, portraying the disaster by presenting the accident as a sinister sexual meeting between these two lovers—the Titanic and ‘a Shape of Ice’.

Don't use plagiarized sources. Get your custom essay on
“ Critical Analysis of Convergence of the Twain Thomas Hardy ”
Get custom paper
NEW! smart matching with writer

The title of the poem alone demonstrates that this catastrophe was planned in advance, a dramatic sensual meeting. The use of such a title lends itself to the interpretation that this disaster was meant to happen, and was something that destiny, ‘the Spinner of the Years’ had planned. This is further developed in the diction that hardy uses in this poem.

The two were ‘intimate’, their history had already been developed and determined; they were to be ‘weld[ed]’ together, to be one another’s ‘sinister mate’.

See more: how to write a critical analysis outline

This sexual, ominous meeting of ship and ice creates a very pessimistic and portentous understanding of what happened. Furthermore, through the use of depicting the iceberg and Titanic as lovers, it leads to the reader understanding the iceberg as the dominant, powerful male lover. This presents another theme of nature being able to overpower man’s ‘vaingloriousness’.

At the ‘consummation’ of the two, the iceberg is left unharmed, where as the ship is sunk under the ‘solitude of the sea’.

Theme of Beauty and Pride

Hardy’s poetry has always had nature’s beauty and power as a theme, therefore it is no surprise that he believes that nature is superior and timeless as compared to the Titanic, that had been so immaculately described and honored just to have sunk under the natural beautiful sea. In this poem, nature seems to witness the events of this meeting, however the images of nature are eerie and representative of death. The ‘dim-mooned eye fishes’ question the presence of the Titanic in the sea’s depths, recognizing it as a vain intruder into their world.

Also the ‘sea worm crawls’ over this foreign invader, ‘indifferent’ to the fact that this vessel was a monumental figure of human development and innovation in 1912. Hardy uses nature witnessing this romantic convergence as a tool to mock the things that humans are proud of and the vanity that is the Titanic, as well as disassociate itself from it. In the poem, Hardy does not undermine the Titanic’s sheer beauty, but it is linked with images of death and destruction.

It is first connected to the ‘Pride of Life’, which is human innovation and vanity, and it is a remarkable creation that was ‘planned’. However, her ‘steel chambers, late the pyres/Of her salamandrine fires’ is the next description that we are given. ‘Pyre’ is a word definitely associated with death and funeral rites, where as ‘salamandrine’ and ‘fires’ both have connotations to death as well, and the end of matter. These descriptions create an ominous mood to the ship and of its imminent meeting with the iceberg.

Hardy’s disapproval to technology, development and modernization is evident not only in other poems such as Where the Picnic Was and The Darkling Thrush but is also evident in this one, and he uses the catastrophe to mock the vanity of man, the things they find superficially attractive, their ‘jewels in joy designed… lie lightless, all their sparkles bleared and black and blind, and the ‘mirrors meant’ to have been used to perceive all this human vanity is crawled over by ‘grotesque’ creatures who are the are the ones that are using these ‘opulent’ items.

Fate, however, is the most blatant theme in the poem; Hardy recognizes fate and the will of God as the reasons why this ship had to have sunk. It is illustrated in the personification of ‘Immanent Will’ and the ‘Spinner of the Years’; this personification is a vague reference to God as well as showing their power and command over human life. These presences ‘urge everything’ to happen, and give imperative commands that must be followed. The poem seems to be representative of Hardy’s feeling that fate’s plans are inevitable and are unstoppable despite whatever has been put in place to prevent what is happening.

Hardy’s theme of the vulnerability of human destiny is present in many poems and is connected to his loss of faith, the poems Intenebris, and the Darkling Thrush evidently presents Hardy’s reluctance to see the beauty in fate, or God’s will, he doesn’t reconcile with this, and therefore there is a pessimistic and gloomy take on the unavoidability of it all.

Fate bring these ‘two hemispheres’ together to witness the result of their vanity and recognize that there is a higher power that is ‘fashioning’ the world’s events, and because of all of he things that have occurred in his life—such as Emma’s death—it has led to this pervading theme of negativity towards fate, God, as well as the passage of time—which is briefly hinted at concerning how the Titanic lost its beauty during its sinking. The construction of this poem is complex and intricate, the numbering of the stanzas makes the reader understand each stanza individually, and consider it a unique unit. This emphasizes the message in the stanzas and makes it all the more powerful. However, there is enjambment in the sixth and seventh stanza, making it as though they were meant to be one stanza.

These stanzas also happen to concern the creation of the ship, and the creation of the iceberg, which are meant to become one in the end—in their sexual meeting. Furthermore, the poem is written in rhyming triplets, along with a tidal rhythm, which manages to capture the feel and movement of the sea in the rhythm of the poem. It can also be noted that the poem is somewhat split into two, the first five stanzas focus on the sunken Titanic, the waste of all the vanity that was put into it, where as the last six stanzas focus on the inevitable fate of the two having met.

Main Ideas of the Author

It is interesting that Hardy possible constructs the poem this way because the tragedy was so well-known and famous that he is able to begin with the focus on the ships already sunken state before delving into the issue of fate and God’s will. One very intriguing element to Hardy’s construction of The Convergence of the Twain is that the stanzas look as if they are tiny ships. This creative device adds more artistic flair to the poem and adds motion to the poem, as well as being a visual aid.

The Convergence of the Twain is a philosophical dirge by Hardy that also happens to illustrate most of his quandaries of life, fate and human vanity. As Hardy using an atypical presentation of the tragedy also manages to make the reader recognize his cynicism and negativity towards human technologies and the Titanic. His poem shows the tragedy of mans overconfidence, and illustrates the importance of recognizing the power of nature as well as fate on our lives.

Critical Analysis of Convergence of the Twain Thomas Hardy. (2017, Jan 31). Retrieved from http://studymoose.com/critical-analysis-of-convergence-of-the-twain-thomas-hardy-essay 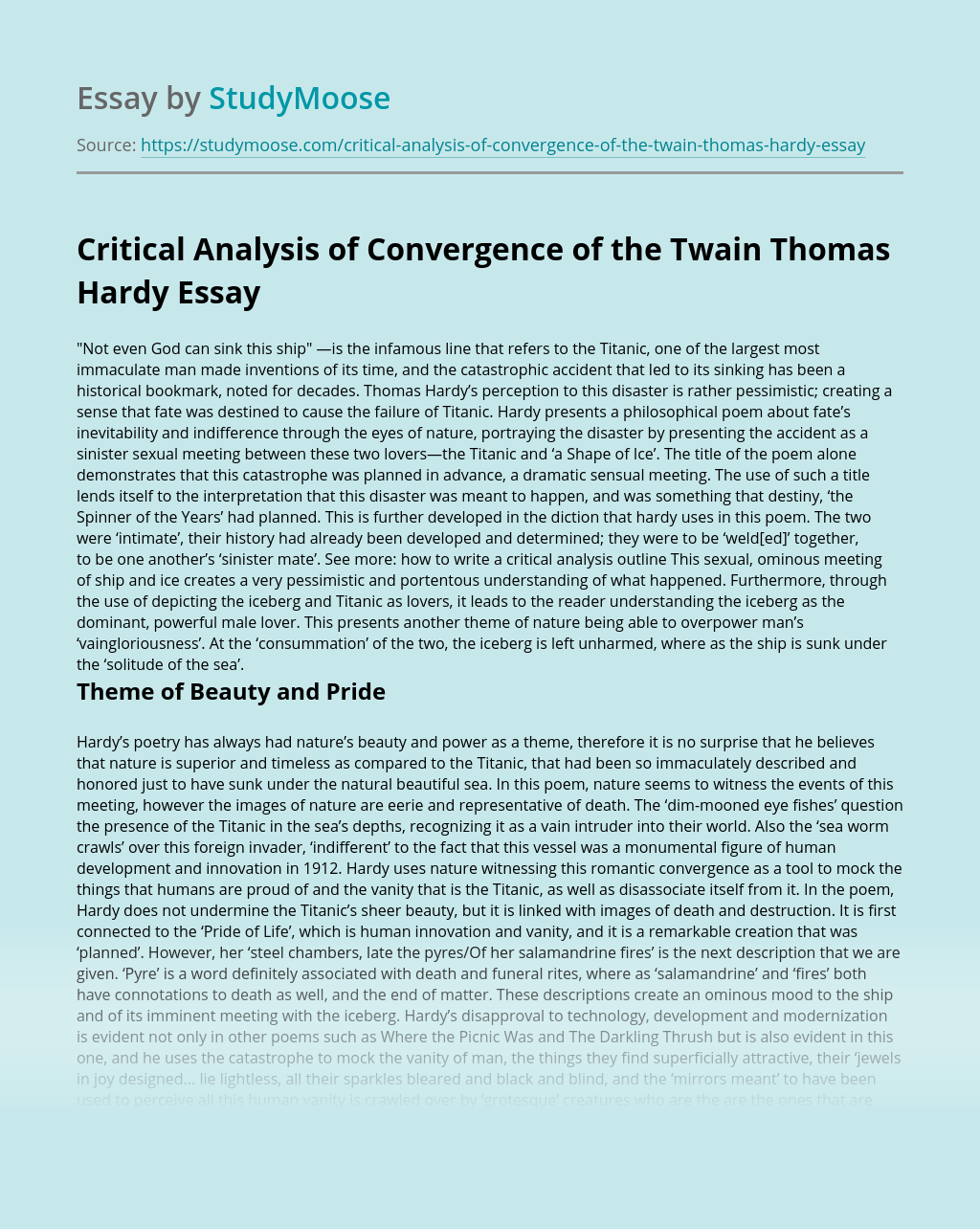