The Ambition In The Play Macbeth

In William Shakespeare’s “Macbeth”, ambition is one of the biggest factors to cause Macbeth’s death. Macbeth was so obsessed with his own power and becoming king that he completely changed his personality. At the beginning of the play, he was a respected nobleman who killed a traitor. Then, he is told by the three sisters that he will become king, and his ambition and greed take over him and he does some very evil things. Lady Macbeth also exhibits ambition when she persuades her husband to murder King Duncan.

Don't use plagiarized sources. Get your custom essay on
“ The Ambition In The Play Macbeth ”
Get custom paper
NEW! smart matching with writer

Shakespeare suggests that ambition can spiral a person out of control and turn a hero into a villain through characters Macbeth and Lady Macbeth.

Shakespeare uses Macbeth to show how a person can get caught up in ambition and greed. Macbeth’s ambition throughout the play is the reason for most of the decisions he makes. He harms his own sanity. Not to mention all the people he kills on his path to become king.

The three sisters give Macbeth a prophecy that he will become king and that Banquo’s son will eventually become king as well. This creates the mindset for Macbeth that he has to do anything to take this title. He loses all ethics and morals he had previously had by murdering the king so he could be the new one. He could have waited for the royalty title to fall to him naturally because the prophecy said he would eventually get it, but his greed took over and he became convinced that he needed to do anything for it, no matter how evil.

Macbeth becomes paranoid and certain that everyone was against him, including Banquo, his own best friend. His ambition for power and status continues as he sends assassins to murder Banquo and his child. This truly shows how a person can allow ambition to completely change their character. This also suggests that greed can make you make poor decisions and do things you will regret.

Macbeth was also deeply affected by the amount of guilt he carried about his evil actions. He does not want to kill anyone initially but his craving for power takes over his morals. Macbeth even speaks his remorse when he says (2.2.91) “Wake Duncan with thy knocking! I would thou couldst!”. This shows how Macbeth is still a good person as of now, and he truly feels bad for what he does. We can see how this changes the more he kills. For example, he says (4.1.151-153) “give to the edge o’ the sword/His wife, his babes, and all unfortunate souls/That trace him in his line”. This suggests that Macbeth is no longer the noble hero he once was, as he shows no guilt for what he is about to do. We can also see that Macbeth never gets the chance to just relax and enjoy what he has, which shows that if you do things the dirty and illegal way, you will not always have to look over your shoulder like Macbeth does.

Like her husband, Lady Macbeth’s ambition also drives her insane and eventually leads to her death. Lady Macbeth is one of the leading factors for Macbeth as she constantly persists that Macbeth murders Duncan. The real reason she does this is that she wants royalty and riches just as bad, if not worse than Macbeth does. Unlike Macbeth, Lady Macbeth does not show the guilt and remorse that is very clearly shown amongst her husband. Once Lady Macbeth develops a plan to kill King Duncan, there is nothing anyone can do to alter her ambition and she will not quit until her ambition is complete.

The Ambition In The Play Macbeth. (2020, Oct 08). Retrieved from http://studymoose.com/the-ambition-in-the-play-macbeth-essay 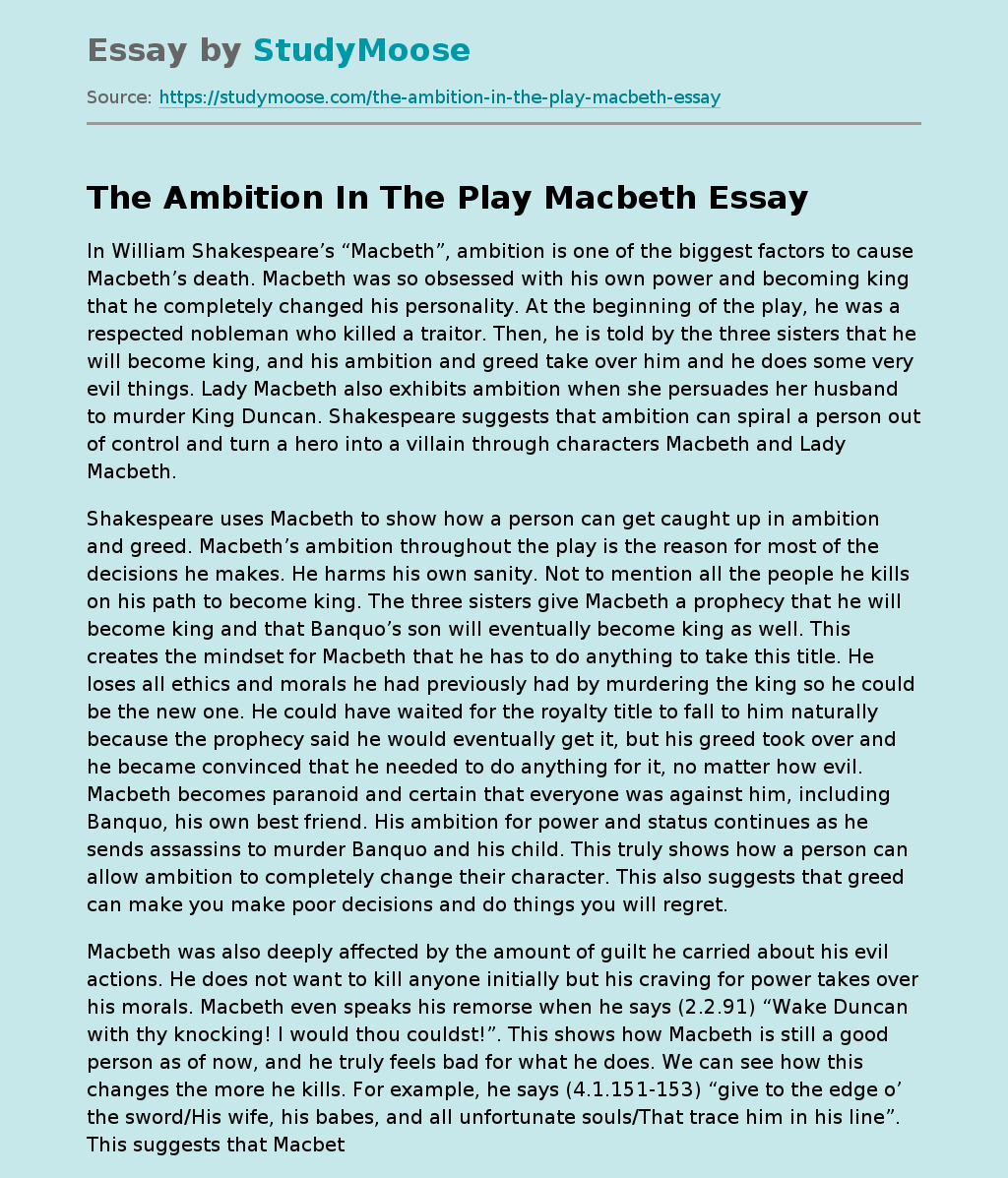