When traveling over land there are three main ways of doing so, a flight, a train ride, or driving yourself. I guess you could walk or run but, I’m talking about cross country travel. There are expensive and inexpensive ways of travel, some fast, some slow, most fun, others boring. Out of these three ways you must decide how you want to go baste on your budget, time, and the quality of travel you prefer.

The fastest way of travel would be by plane.

Don't use plagiarized sources. Get your custom essay on
“ The advantages and disadvantages of traveling ”
Get custom paper
NEW! smart matching with writer

If time is a major issue, a flight would be the best mode of transportation for you. A flight can also be easier to schedule, there are hundreds of flights leaving every half-hour, in every direction from and to almost every airport in the world. Besides being fast and convenient, studies have shown it’s also safer. Statistics show air travel as one of the safest ways to travel, baste on its passenger to crash ratio.

The down fall is a flight is also the most expensive way to travel out of the three. A flight from California to New York (round trip) could cost anywhere from $500.00 to $2,500.00+, depending on which class (or section) you purchase your ticket for. On most commercial planes there are three sections of seating, where you sit depends on your willingness to pay.

There’s first class; which is very luxurious. This is the most expensive section to sit in. It has more leg room, larger and softer chairs, better service, and hand prepared meals instead of the processed food the rest of the plane gets.

Next is coach or business class; which is the middle section, it’s somewhat luxurious. You get some leg room, descent service but, you still get processed food. For anyone who wants real food better spend a little extra money and fly first class. At the back of the plane you’ll find the economy class; which is one of the cheaper ways to fly. The service isn’t great, the leg room is non-existent, and you’re one of the last people to get off of the plane when it lands. So, you’re one of the last ones to get to the baggage claim, by the time you get there either your bags have passed by, or you’re stuck behind thirty people who have no clue of what to do, so it takes you that much longer to retrieve your bags. In my opinion, it’s the shit end of the stick.

Another way to travel is by train. On a cross country trip you would have sleeping quarters; which would have a bed and bathrooms for yourself. During the ride you could stay in your room or roam around to the different cars; which have various uses. Traveling by train can be very relaxing you can sit by a window while having a meal or snack and enjoy the view of the countryside, or engage in conversation with another passenger at the bar while having a drink. The only thing is time; it would take a couple of days to go cross country by train. Another thing is you can only stop where the train is schedule to. The good thing is that you can sleep, eat, take a shower, kick back and relax as the conductor controls the train. You don’t have to worry about the controls; it’s not like your driving.

Driving yourself cross country is a mode of transportation which a lot of people have started doing more of. A major down fall is the time it takes to get from point A to point B, it take so long and is so uncomfortable most people would rather pay extra for a plane or a train ticket. If you choose driving cross country, you can do so by either taking a car (renting a car or taking your own), or in a recreation vehicle or R.V. Of these choices, most people would choose to rent a car or R.V., normally you would use you own car for short trips. A R.V. is good for the long trips with family or friends, because it can seat from five to ten people depending on the size of the vehicle. Also you control where you go, sleep, when and where you eat, and for how long you would do these things. You’re not on anyone’s schedule; you can change your destination in the middle of your trip if you wanted to. In a car you have these same freedoms, except to sleep, you would have to stop somewhere to sleep.

You could sleep in the car but, it would most likely be very uncomfortable. When driving a distance of this nature you want to get plenty of rest. Having made trips like this, and trying to drive straight though, after a day or two with no sleep you start to see thing that aren’t there. Its been documented that if you are driving on a straight road for long periods of time with out any sudden movements, you can start to fall in a trance; where you can go to sleep or you can stay in the trance but, you are in a mode of being awake and sleep at the same time. This is how allot of accidents happen. Driving long distances isn’t for everyone, it takes some who can enjoy there own company, and who wont go crazy when it seems they are on an endless road. One of the most expensive parts of trip would be gas; the average price per gallon nation wide is about a dollar and sixty cents. If you figure the average car/truck holds about twenty gallons of gas and get about eighteen miles to the gallon, it would cost about thirty-two dollars to fill up, and you would have to fill up around ten times if the trip was about three thousand miles. Meaning it would cost you three hundred twenty dollars for gas alone.

In all, I would have to say I would rather spend a little extra and travel by plane. I like the fact it’s going to get me to my destination faster than other ways of traveling. It will also be relaxing in the upper two classes of seating. I think my main purpose for choosing a flight is time. I’m always in a rush, I don’t know why, I just am.

The advantages and disadvantages of traveling. (2016, Jun 22). Retrieved from https://studymoose.com/the-advantages-and-disadvantages-of-traveling-essay 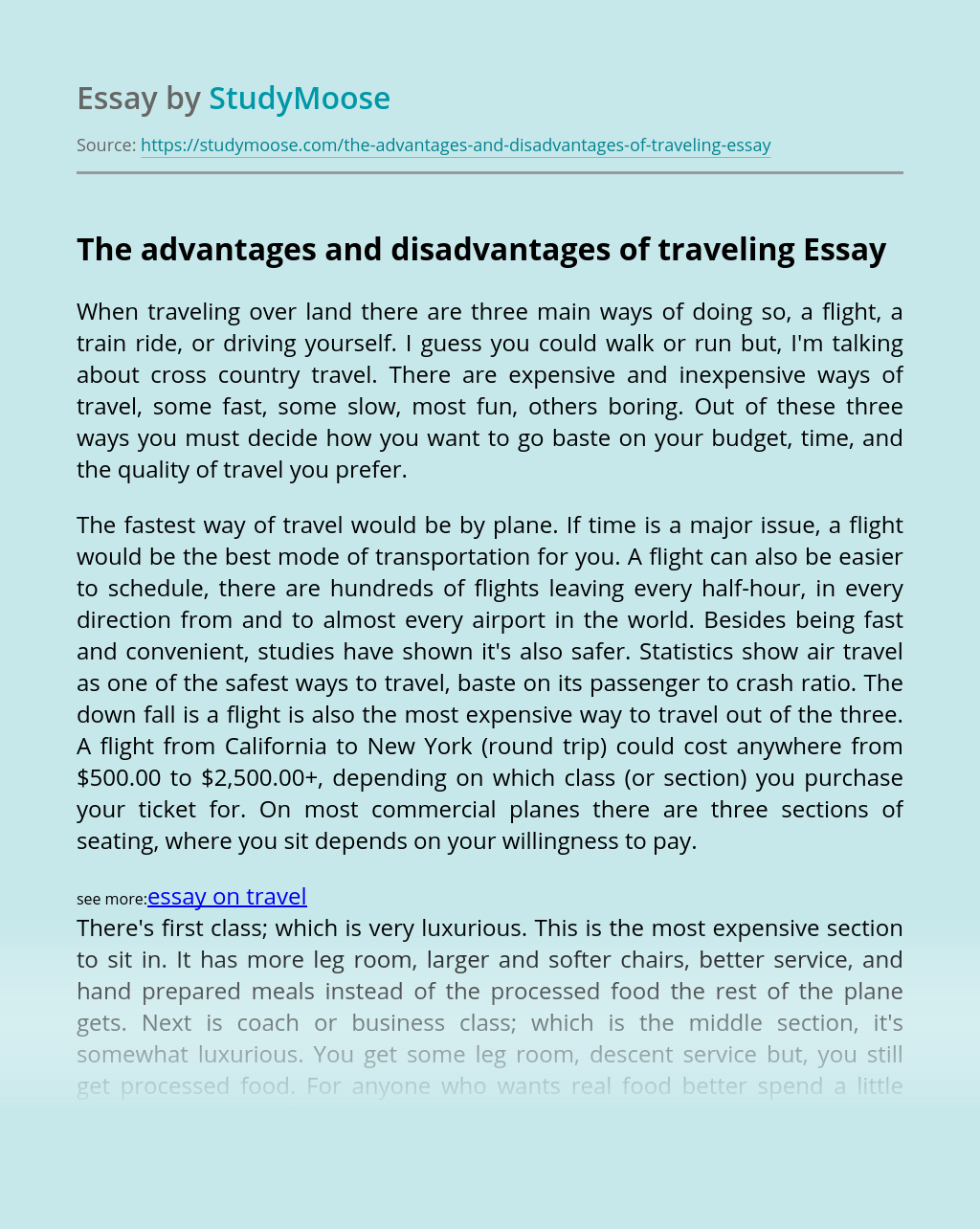