The poems “The Bull Moose” by Alden Nowlan and “Traveling Through the Dark” by William Stafford both feature tragic human encounters with animals.  The animals in both stories come to portray human disregard for the natural world.

In Nowlan’s “The Bull Moose,” the reader witnesses the obscene treatment of a wild animal who has unwittingly stumbled into human territory.  “Too tired to turn or, perhaps, aware there was no place left to go,” (stanza 2, lines 1 and 2)  the moose does not run away from the humans, he allows them to come near him and to touch him.

Don't use plagiarized sources. Get your custom essay on
“ “The Bull Moose” by Alden Nowlan and “Traveling Through the Dark” by William Stafford ”
Get custom paper
NEW! smart matching with writer

They touch, they harass and they cajole the poor beast who does not respond with any aggression.

He, although most certainly as afraid any wild animal would be, has no strength to escape the crowd that has gathered to take a look at him.  Reading Nowlan’s poem, a sense of familiarity emerges. Who among us can deny having seen similar actions by humans at one time or another? One is compelled to question why people would do such a thing and ignore the obvious suffering of a wild animal.

Stafford’s “Traveling Through the Dark” tells the story of finding a dead deer in the road while driving along one night.  The car that hit the deer had kept on driving and had not cleared her carcass from the road making it dangerous for other drivers.  The subject of the poem, upon dragging the deer from the road discovers that she had been pregnant, “her side was warm; her fawn lay there waiting, alive, still, never to be born” (stanza 3, lines 3 and 4).

That the deer was pregnant compounds the harshness of the death and brings the reader to a new emotional level.

Both poems use animals, the deer and the moose respectively, to symbolize grave disregard for nature.  In both cases, harm has come to the animals at the hands of humans.  In “The Bull Moose,” the animal takes on an almost saint-like martyrdom when he “let(s) a giggling girl plant a little purple cap of thistles on his head” (stanza 5, lines 2,3 and 4).

According to Greg Cook in his essay “Alden Nowlan, something rare and beautiful: a memoir,” Nowlan despaired of man’s inhumanity to the world around him and “developed alter-egos in his work – such as the imaginary brother, or the figures of animals, like the bull moose – to salve his wounds.” (para. 7)  The personification of the moose as a figure that simply stands and endures the torment of others before dying amplifies a true disgust for human injustice to those most vulnerable. No one in the poem stands up for this poor animal which has come into their midst.

In contrast, the dead deer on the road in “Traveling Through the Dark” conveys character only through the fact that she had been carrying an unborn animal inside of her.  This fact alone makes the poem more poignant and tragic.  The reader is faced with a man peering down at a dead dear “large in the belly”  (stanza 2, line 3) and there is a sense of injustice.  The idea of leaving behind this deer and her unborn fawn seem so harsh and cold.  The man in the poem steps out to deal with this situation and struggles with having to dump the body of the doe.

He makes the choice based on the fact that it will be dangerous for other cars if the doe lies in the road.  In this way, his regard for the life of humankind is highlighted and one must ask when contrasting the two poems why it is that so often humans regard each other before animals.  In the final stanza and final line of the poem, the man makes his move-“I thought hard for us all–my only swerving–, then pushed her over the edge into the river.”

This act forces the reader, as part of “us all,” as part of the larger society, to take on part of the responsibility for the violence that has been inflicted on this animal and for the atrocious death of the unborn fawn in her belly.  In pushing the deer over the edge, the poet takes action for the injustice and, in some way makes amends.

In both poems, the reader is faced with death and the unkind acts of humans.  In examination of the writing in both works, we come to understand perhaps a bit about both poets and their view of the morality of humans.  Both works are innately sad and tragic and evoke a sense of guilt or at least culpability in the reader.  These poems are a challenge to do better, to be better and to perhaps stand up in the face of injustice and make a difference.

“The Bull Moose” by Alden Nowlan and “Traveling Through the Dark” by William Stafford. (2017, Apr 24). Retrieved from https://studymoose.com/the-bull-moose-by-alden-nowlan-and-traveling-through-the-dark-by-william-stafford-essay 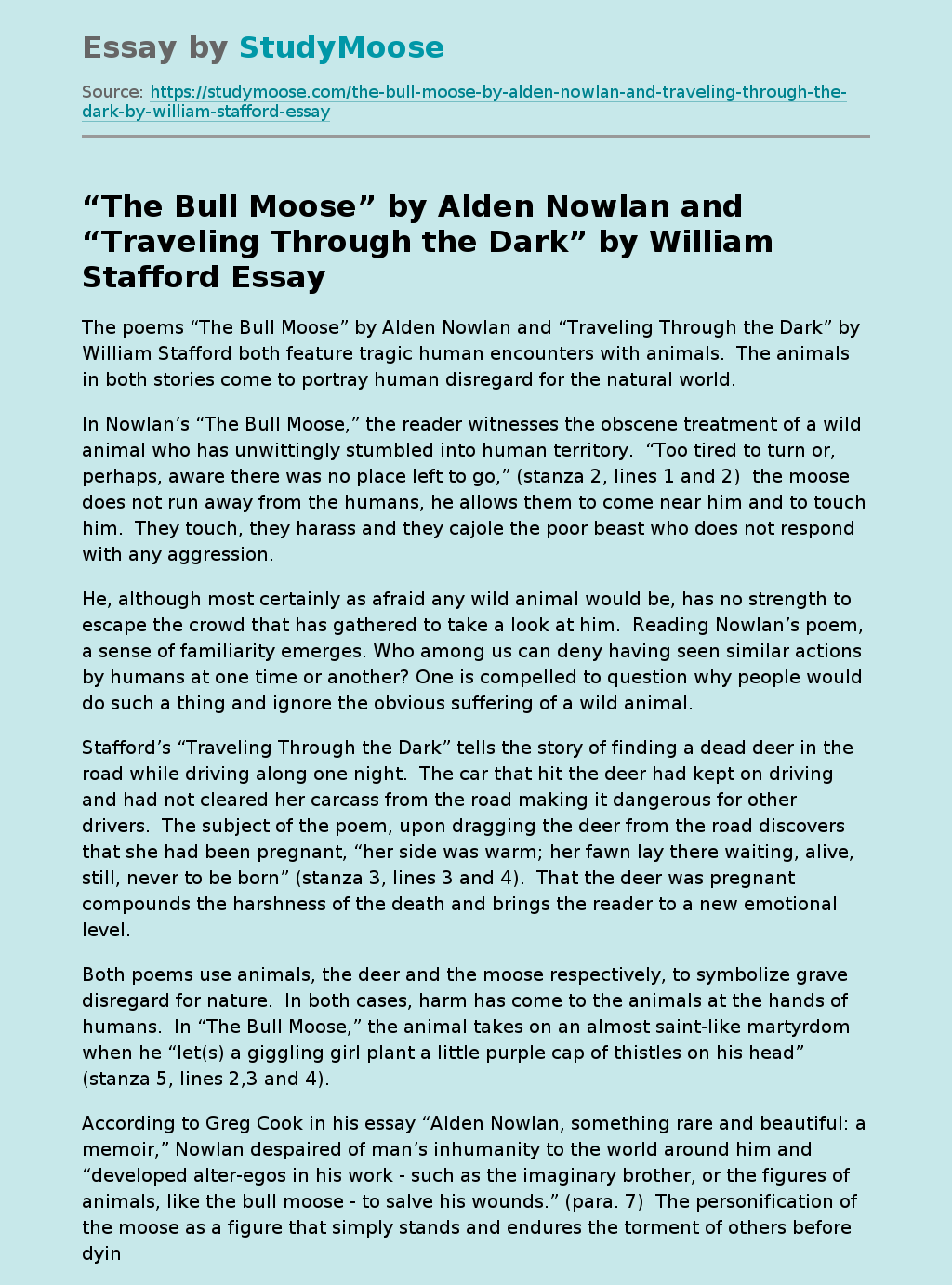