“Thank You M’am” by Langston Hughes

“Thank You M’am” by Langston Hughes is a story of a middle-aged woman, Mrs. Jones, meets with a boy, Roger, who attempts to steal money from her. Anyway before she got robbed, she catches the boy and chooses to give him a lesson of his life. Mrs. Jones is presented as a thoughtful, trustful and good-hearted woman.

Firstly, Mrs. Jones characterized as thoughtful woman who understands teenage requests and problems. She helps a teenage boy who needs help. In quote “You could of asked me.

Don't use plagiarized sources.
Get Your Custom Essay on “Thank You M’am” by Langston Hughes Just from $13,9/Page

” She shows her charity to Roger that if he asked politely instead of attempt to steal her purse, she could help him. Mrs. Jones can understand Roger’s problem because she was also young once and she wanted things that she could not get, but instead of stealing valuable things she decided to gain money with doing other things. Anyway at the end Mrs. Jones gives ten dollars to Roger to buy himself a blue-suede shoes that he wanted.

She also gives a lesson to Roger. Mrs. Jones admonishes him that he shouldn’t do any mistake of stealing anybody’s purse anymore. It shows how Mrs. Jones is considerate woman that helps Roger even though she got robbed by him.

Secondary, Mrs. Jones portrayed as reliant woman who does not watch the Roger in her house. In quote “The door was open. He could make a dash for it down the hall. He could run, run, run, run, run!” Mrs. Jones shows her reliability to Roger. She trusts Roger and she knows that he is not going to choose to run away. Moreover, she left her purse behind her on the day bad where the Roger sits. She is absolute sure about that Roger is not going to attempt to rob her again. So that she leaves her purse out in plain view.

Mrs. Jones’ acts are weird because Mrs. Jones knows Roger for an hour, and not a normal person allows a “thief” in his or her house. That shows how Mrs. Jones is optimistic person. As it can be seen from the acts of Mrs. Jones, she is trustful person that she does other things instead of watching Roger in her house. Mrs. Jones is good-hearted woman although Roger attempts to steal her purse. Mrs. Jones treats him well, in quote “Then it will get washed this evening.”

She tries to say that Roger’s face is dirty and his face is will get washed in her house. She takes him to her house to give him a lesson of his life. Furthermore, the boy asks that is she going to take him to jail, but the woman answers no. It shows that Mrs. Jones forgives him, because she was a young once and she can understand of teenage problems. Also she makes cocoa and cuts him a cake. As it is obvious from her actions, Mrs. Jones is amiable to Roger, even though he is a black boy.

After all, Mrs. Jones teaches an important lesson to Roger about not to do any mistake of stealing anyone’s purse or money. Roger says “Thank you m’am” to show his courtesy to Mrs. Jones. He thanks for Mrs. Jones for money, food and being a good teacher. Then he leaves.

“Thank You M’am” by Langston Hughes. (2017, Feb 15). Retrieved from https://studymoose.com/thank-you-mam-by-langston-hughes-essay 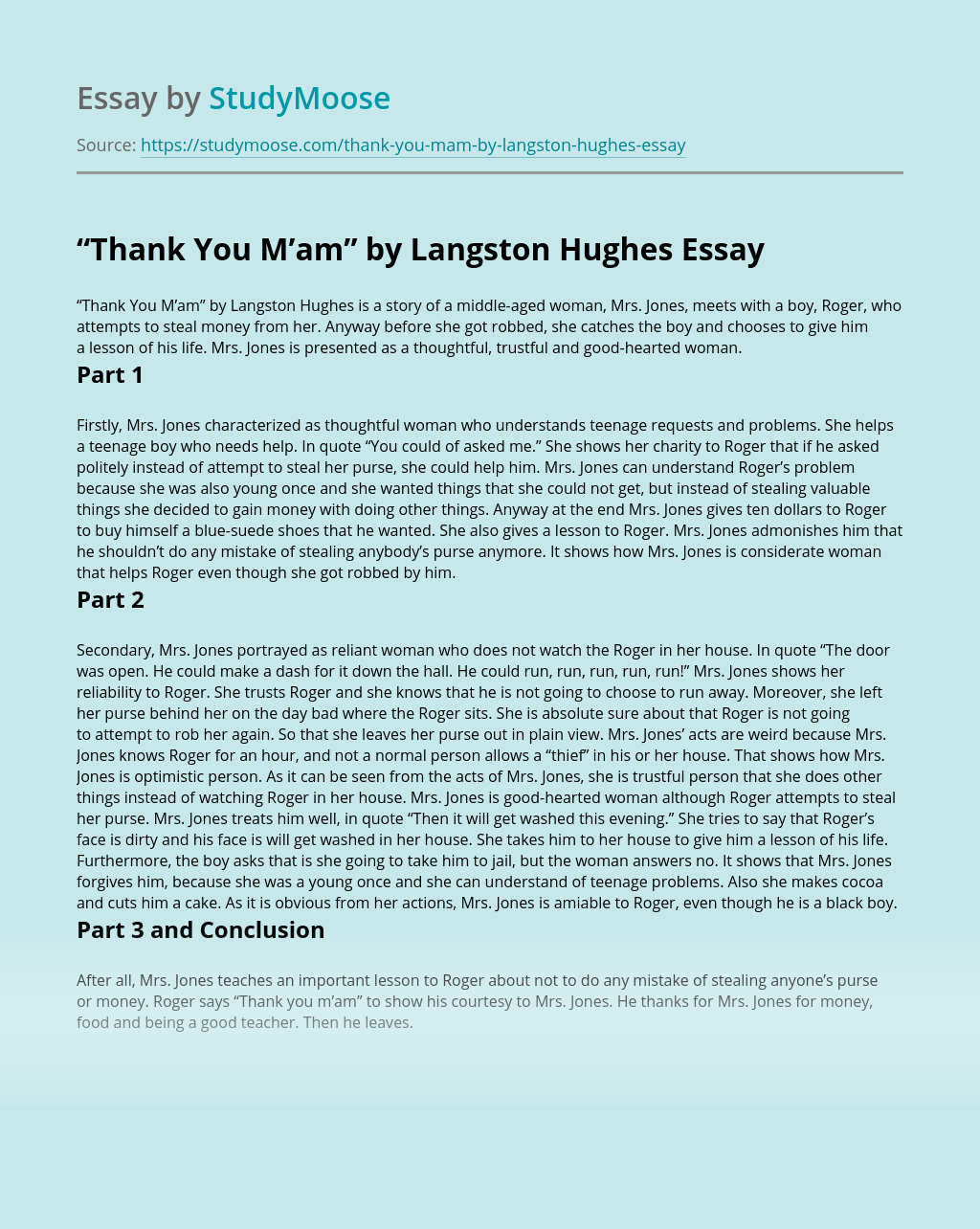 1. Based on the “Billy Beane: Changing the Game” case, explain how and why the Oakland A’s economic situation after 1995 shaped its: a) Compensation Strategies In the world of major league baseball, Oaklands A’s defied the laws of baseball economics. The team spent only $34 million (the 2nd lowest payroll) had won 102 games...

The word Yankee has a different meaning for many of us. Some use it as a derisive term to hurt ones feelings, others use it proudly as an expression of patriotism. It is a struggle that has ensued since America began to be colonized. Where the word Yankee originated has been debated for many years....

View sample
Get Essay
The Importance of Nonverbal Communication in Sports

One day I watched a one day cricket match played between the Dave Higher Secondary School’s senior boys team and our school team. There was a large number of audience. It was quiet sunny. It was half an hour for the match to start but the stands and the galleries were almost full. The match...

This article is about the declination of blacks in the game of baseball. It begins by talking about how successful blacks were in baseball from 1981-1997. Blacks such as Tony Gwynn, Tim Raines, and Gary Sheffield were winning National League Batting Titles 16 out of those 17 years. From 1998-2004, only one black player has...