Territorial Expansion in the United States From 1800-1850

From 1800 to 1850 territorial expansion tore the United States apart. Territorial expansion itself was not a debated issue. Spurred by the concept of Manifest Destiny, almost everyone believed that America should extend from sea to shining sea and maybe even farther. But it was the issue of the expansion of slavery into the new territories that pitted the North against the South and split our nation apart.

The first real crisis over territorial expansion took place in 1819-1821 over the admission of the state of Missouri.

Don't use plagiarized sources. Get your custom essay on
“ Territorial Expansion in the United States From 1800-1850 ”
Get custom paper
NEW! smart matching with writer

S. created havoc in Congress. In February 1819, Congressman James Tallmadge, from New York, proposed an amendment that would prohibit any new slaves to enter the state and provided that all slave children born after the date of admission would be set free at the age of twenty-five. Tallmadge’s gradual emancipation proviso received almost unanimous opposition from Southern Congressmen.

The amendment twice passed the North dominated House of Representatives, only to be turned down by the balanced Senate. In December 1819, Maine applied for statehood as a free state. In the end a compromise was reached where Maine would enter the Union as a free state, Missouri would enter the Union as a slave state without restrictions, but in the remaining Louisiana territory slavery would be prohibited north of 36o30′ (the Mason-Dixon Line).

The next jolt to national unity was over the admission of Texas into the Union. Texas had petitioned for admission as early as 1836, and the ensuing arguments in Congress over upsetting the balance between free and slave states delayed its admission into the Union. The issue of annexation was closely linked to the issue of expansion of slavery. Southerners saw the annexation of Texas as a way to expand the nation’s cotton production and as a means to gain an additional two slave state votes in the Senate. Some Northerners feared that the annexation of Texas was part of a Southern conspiracy to extend American territory south into Mexico and South America, thereby creating unlimited new slave states. Still, in February 1845, both houses of Congress voted to annex Texas. Shortly after the annexation of Texas the Mexican War broke out. Lasting about 1½ years, it was fought throughout Texas, New Mexico, California and into the Mexican interior. Northern abolistionists, backed by many Westerners, claimed that the war was unjust and was fought for the sake of the expansion of slavery.

In the end the U.S. won and acquired Texas, New Mexico and California. Expansion into these new territories brought up many questions and aggravated the existing splits between North and South over the slavery issue. In 1848, the United States contained 15 free and 15 slave states and many moderates did not want to upset that fragile balance. Therefore, controversy surrounded all of the proposed solutions to the problem of slavery in the territories. Early in 1850, Henry Clay proposed a solution, known as the Compromise of 1850, to resolve these disputes.

The Compromise was designed to relieve growing tension by allowing for admission of California as a free state in exchange for, among other things, the Fugitive Slave Act and the nullification of the 36o30′ rule. But the Compromise of 1850 was not at all successful in achieving its purpose. The North saw the Fugitive Slave Act as an evil imposition, many Northerners refused to allow its enforcement. The South, too, found the compromise unprofitable. Unfortunately, by 1850 sectionalism was so deeply engrained into the psyche of the country that compromise failed to work.

From 1800 to 1850 America saw a growth in territorial expansion. This expansion, aided by sectionalism and the slavery issue, eventually tore the United States apart. By 1850 conditions had peaked and compromise between North and South could no longer produce an adequate solution as it had done in the past. Ten years later America plunged into the Civil War. 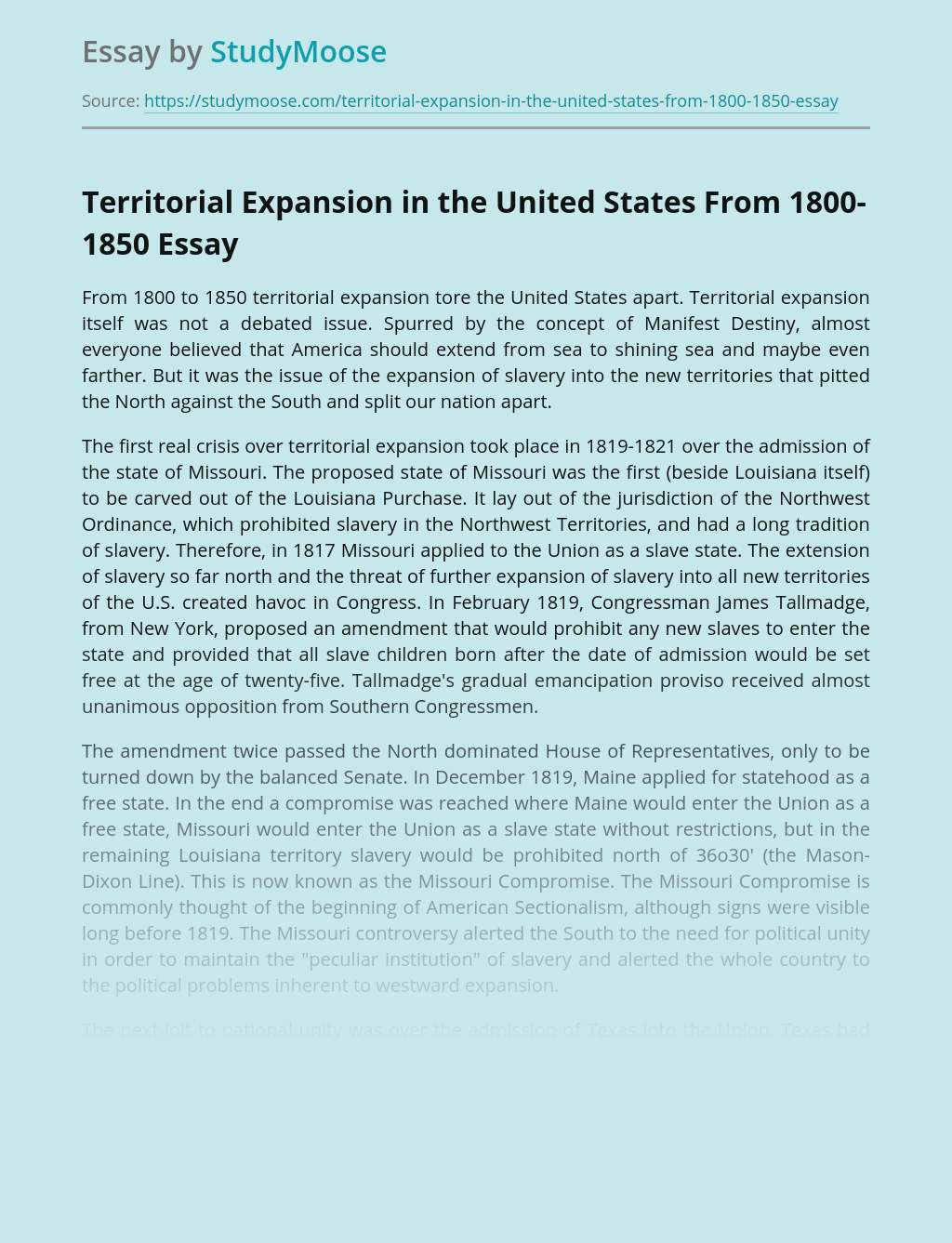