Today, I would like to present a speech entitled “Teenagers of Today”. All people have to go through their teenage years. Some of you have already passed this stage, someone is on the way, and some others still dream about the time when he/she will, finally, grow up! Nowadays, teenagers have changed in comparison with the teens in the past. From head to toe, everything about a teenager is unique. The way they dress is different. The way they act is different.

Don't use plagiarized sources. Get your custom essay on
“ Teenagers of Today ”
Get custom paper
NEW! smart matching with writer

Even the way they speak is different. Teenagers are known to be moody, insecure, argumentative, impulsive, impressionable, reckless and rebellious. Teenager today is “a technology generation”. For teens in today’s world cell phones, internet, music, movies, and television are very important. An aspect worth mentioning is communication. Facebook or twitter has become an essential feature of teens’ social lives. Their lives aren’t completed without accessing these social networks in a day. Teenagers today prefer making friendship in cyber world than in the reality.

Do you know that teenagers nowadays succumb to various influences? One of the influences is friends. Most teenagers rather spend most of their time with friends than staying at home. Mostly on weekends, they gather around food stalls to talk about the events which have happened over the week.

They even hang out with friends at night. The trend of fantasying unrealistic ambition of being celebrities or influential figures is popular among teenagers. There is no doubt that the existence of multimedia plays a part in encouraging teens to set foot into the entertainment world, even where their potential or talents have not been lifted to the standards in acting and singing.

National television contests open doors to discover the hidden potential of the youths. The actual purpose and intention is good, but when going to school teenagers neglect their studies to focus on the competition, it turns out to be bad. Besides, some teenagers today are lack of moral values and self-discipline. In the past, a majority of the youths then learnt respect, courtesy, honesty and righteousness from a young age, and had enough self-discipline to hold to these values. However, these moral values and self-discipline are slowly diminishing over the years, as most of the younger generations are gradually disregarding these ethics.

This is likely caused by too much media exposure and less concern of their parents. It can be said that teenagers spend more than 38 hours per week being entertained by the social media. Parents who are busy for their work don’t even notice about this problem. Consequently, these teens learn lots of things from the media, such as violence and bad behaviors which throw their moral values and self-discipline into the thin air. Alcohol abuse is one of the biggest drug problems in teenagers who go to the school or to the college. Teen alcoholism is one of the main issues concerning almost all communities, families and schools. The teenagers start to take drugs because they are under tremendous stress. Alcohol makes teens feel good and happy as they get a break from their problems. Therefore, they drink because it helps them escape from reality or cope with stress that can be very cruel for some teens. Some teenagers are rebellious to their parents. They often behave very rudely against their parents, do not obey and follow their advice. The first concern is the lack of communication between parents and teenagers. The parents might be busy with their important jobs and other activities. They may not have all the information to what their child is doing when they are not present.

Teenagers argue about many of their problems to their friends. They may think that their parents are not giving them enough freedom that they deserve after comparing themselves to their other friends. Popular culture, fashion and music also influence them. For example, rock star, music and heavy metal cause the teens to follow the style and dress in a different way. They have all the black makeup that even parents don’t like. Then the results are that parents began to ground their kids and this is worse for them and then they become more rebellious with their parents. For a short period of our adolescence, we must try to make this the exciting, enjoyable, and memorable times in our life. Being teenagers, we are in that fortunate stage where everything is positioned to go our way.

We are young, energetic, feeling free and independent minded. I believe though that in this stage, we really need the guidance and support of our parents and older people. What teens need is acceptance and to be appreciated. They must have good relationship with adults. Youths should have access to and conversations with caring adults. They need adults to have a positive view of them and to take those more seriously by becoming more understanding and accepting. They need guidance and limits, because they can be inconsiderate. They also need more information of being a teenager. It is very crucial to guide them with useful information to deal with their stress and conflicts. In conclusion, teenagers need to give affection and receive it. Help them cope with emotions. They need encouragement instead of lecturing. Always remember, a teen is never too old to receive love and care. Thank you.

Teenagers of Today. (2016, May 07). Retrieved from https://studymoose.com/teenagers-of-today-essay 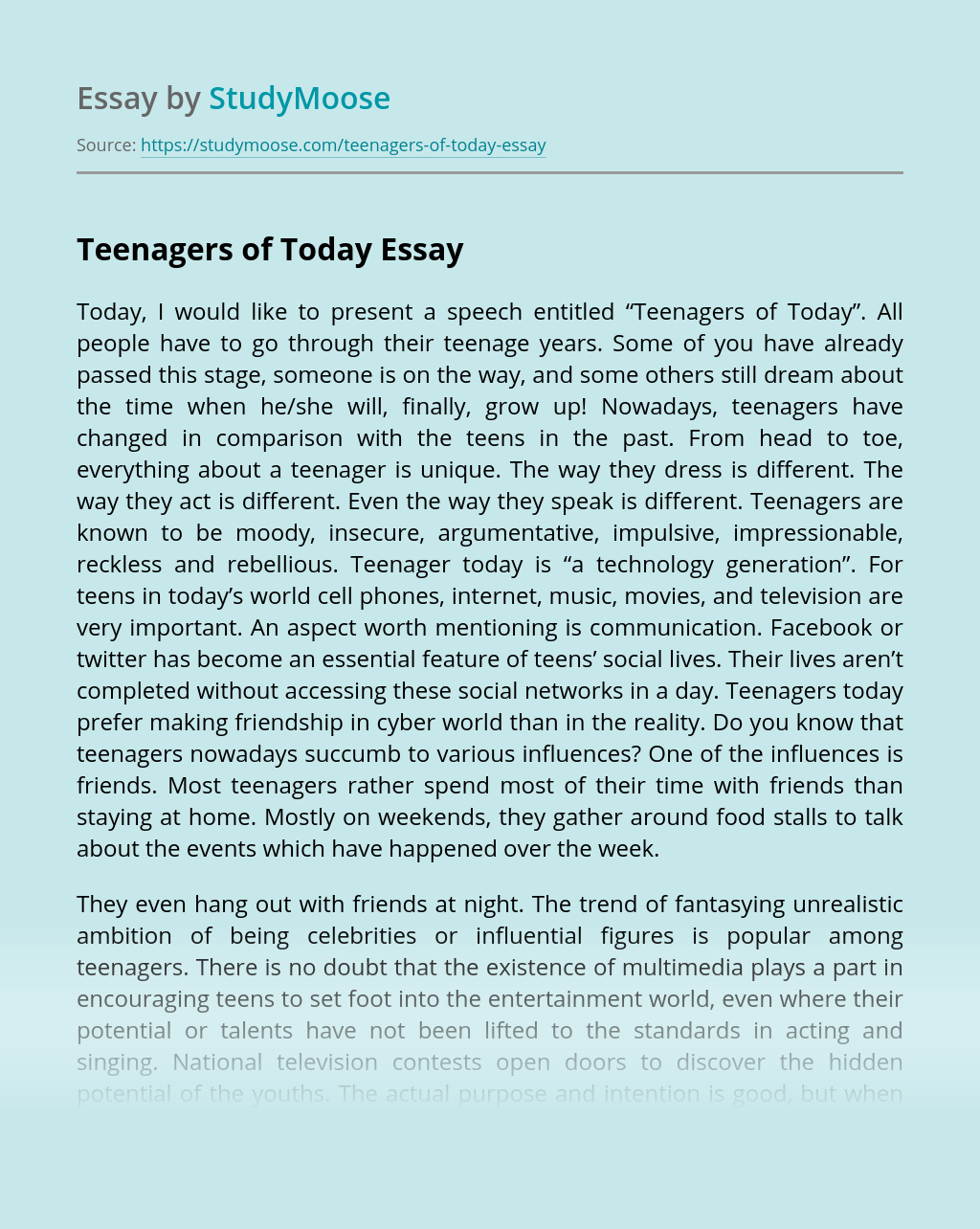