Turn in your highest-quality paper
Get a qualified writer to help you with
“ Technology: The Double Edged Sword of Society ”
Get high-quality paper
NEW! AI matching with writers

More specifically, we can see that communication and how society operates and interacts is being largely affected by these changes. These advancements in technology possess not only positive, but negative effects on society, and impact how we communicate and operate with one another. Throughout the U. S. , we can see that the advancement in technology has had drastic changes on today’s society, and how we communicate and operate in our daily lives because of the power of the internet, social networking and the creation of Smartphone’s.

Despite this being the youngest advancement, we can see that social networking has had major effects on the way our society communicates today. The simple fact that a person can just pull out their Smartphone, and begin accessing Facebook, a social networking phenomenon that allows people to share all sorts of information, such as pictures, videos, website links, and most notably wall posts, is making life incredibly quick and easy.

No longer do people have to call one another to talk to them, but they can just message them on Facebook.

Our society is moving further and further away from face to face talking, and it can even be argued to say phone calls are becoming a thing of the past. Whether or not this is a good or bad thing is extremely debatable, but it seems to have many benefits in today’s world. Furthermore, the fact that life is becoming faster and faster paced exemplifies the benefits of social networking. Facebook is just one of the few large social media groups. Twitter, Instagram, Tumblr, and Youtube are all examples that can be used to support the positives of social networking.

Something as simple as receiving a picture, video or a message can make all the difference in a family’s life. All of this is only possible because of the advancements we have made in technology. Social networking is a double-edged sword having positive and negative effects on society. In fact, people are becoming addicted to social networking, which in turn leads to less productive people among our society. Statistics show that twelve percent of social media users have to check their social networking site at least once every couple of hours (Dyer).

Social networking is becoming habit forming and a constant worry of the everyday user. This shows that social networking, despite its many beneficial effects can negatively affect our society, how we operate and what matters to us. Social networking is a powerful tool in our society, allowing people from all around the world to communicate with one another, share all types of media and can even make changes on grand scale, such as in the middle east and the U. S. , but it also has the potential to cause problems, such as being less productive and an overall decrease in the private life.

Although, the Internet allows for people to find and post information, many people run into skewed or just false information. In many cases, it can be hard to distinguish whether something is true or not if it is posted on the Internet. For example, the website Wikipedia, which is an extremely popular and useful tool, but is extremely controversial because of its lack of credibility among the professional world. Wikipedia contains information on just about anything someone can want to think of, but because many people can edit their articles, it is considered unreliable or discreditable.

Many students in our society struggle to find other ways of find information that doesn’t come from the internet, Furthermore, it can be said that our society has become dependent on the internet, and without the internet life wouldn’t be as quick and easy as it is now. Not only has the Internet affected our society’s way of obtaining information, but it has also changed we communicate. With the Internet people can instantly message each other, voice call or even video chat with one another anytime and anywhere.

The effects that the Internet has on communication within our society are positive and negative. With the Internet one can keep in touch with people everywhere, but our society is becoming less and less used to direct communication. This isn’t a positive effect and as the Internet continues to become more and more of a natural part of society, it will only get worse. Face to face communication is important because it is a valuable skill, as well as a beneficial contributor to the human psyche.

A study completed by George Mason University shows that communicating in person leads to more trust and understanding with one another, where as online communication is driving our society into a deeper divide (Luscombe). Furthermore, people need to communicate with one another directly in order to live a healthy lifestyle and be empathetic towards one another. Our society needs to find a balance between communicating virtually and in person, in order to maintain our humanity. Consequently, the Internet is continuing to shape our society, and is affecting it in many drastic ways.

Having a dependency on the Internet isn’t good, nor is losing the comfort and benefits of direct communication, but the Internet isn’t going anywhere, and society will continue to adapt and change as the Internet grows larger and becomes more of a natural part of society. Finally, the Smartphone can be discussed, which is the most constantly changing technological advancement of the three, but it is the advancement with the larges effects on society. Smartphone’s have only been around about six years, but they are becoming the norm in our society and are extremely powerful tools that are affecting the way our society communicates and perates.

For example, with a Smartphone people are capable of using the internet, social networking, texting, video and phone calls, as well the use of apps, which are designed programs for Smartphone’s, these included ITunes, web browsers, games, and the list goes on. With all of these capabilities, the Smartphone has many positive and negative effects on society, someone who has a Smartphone can communicate with people in just about anyway, and they have the ability to do so instantly in the palm of their hands. Furthermore, Smartphone’s are making daily life move at incredibly faster and more efficient ways.

With this, many people get lost in these devices and the masses seem to always be looking down into these powerful tools. Everyday people walk around with Smartphone’s in hand, not paying any attention to what is happening around them. This alone is causing our generation and future generations to veer from direct communication and awareness of the world around them. Although, Smartphone’s are causing a problem in the way our society is functioning in a social aspect; it does provide benefits to everyone who partakes in using Smartphone’s.

With the power of a Smartphone, a working student or adult can be able to keep track of and do just about all their work needs, as well as recreational activities. Studies show that eighty percent of the world’s phone users are using Smartphone’s, which is an amazing amount of Smartphone’s (Singh). So many people have switched to using Smartphone’s because of the ease they present to daily life. Because of this fact, Smartphone’s are changing the future and how society will operate.

Bank accounts, shopping, web surfing, video watching, news articles and so many more types of tasks can be completed on a Smartphone and the simple fact that it is just a phone is incredible. In order to keep with pace life is moving at, the Smartphone almost seems necessary to function in our changing society. All in all, the Smartphone is a device that is not going away, and despite its few negatives, the benefits are just too powerful to lose. As a result, the major advancements in technology over the past few decades is having profound effects, of both negative and positive manner, on the way our society is communicating and operating.

From the effects social networking, the Internet and Smartphone’s are having such as changing how our society is communicating and what is becoming the norm; to how and what people’s daily lives revolve around to accomplish their daily needs. Consequently, all of these advancements bear with them negative side effects on society. For this reason, many people strongly dislike these technologies and the power they possess and what they are doing to society, nor can they see the benefits. Despite all this, there are vast majorities of people that can accept the fact these advancements are necessary for society to move forward.

With all this said and done, it’s important to note that these technological advancements are growing larger and are becoming even more powerful tools for society to use, but it’s important we don’t let it change society for the worse. We can’t lose the importance of intimate and direct communication and the benefits it has on society. Technology has the potential to run our lives, and we need to keep this in mind in order to prevent this downward spiral from occurring; so that we can retain the simple enjoyments in life, as well as simply maintaining what makes us human. 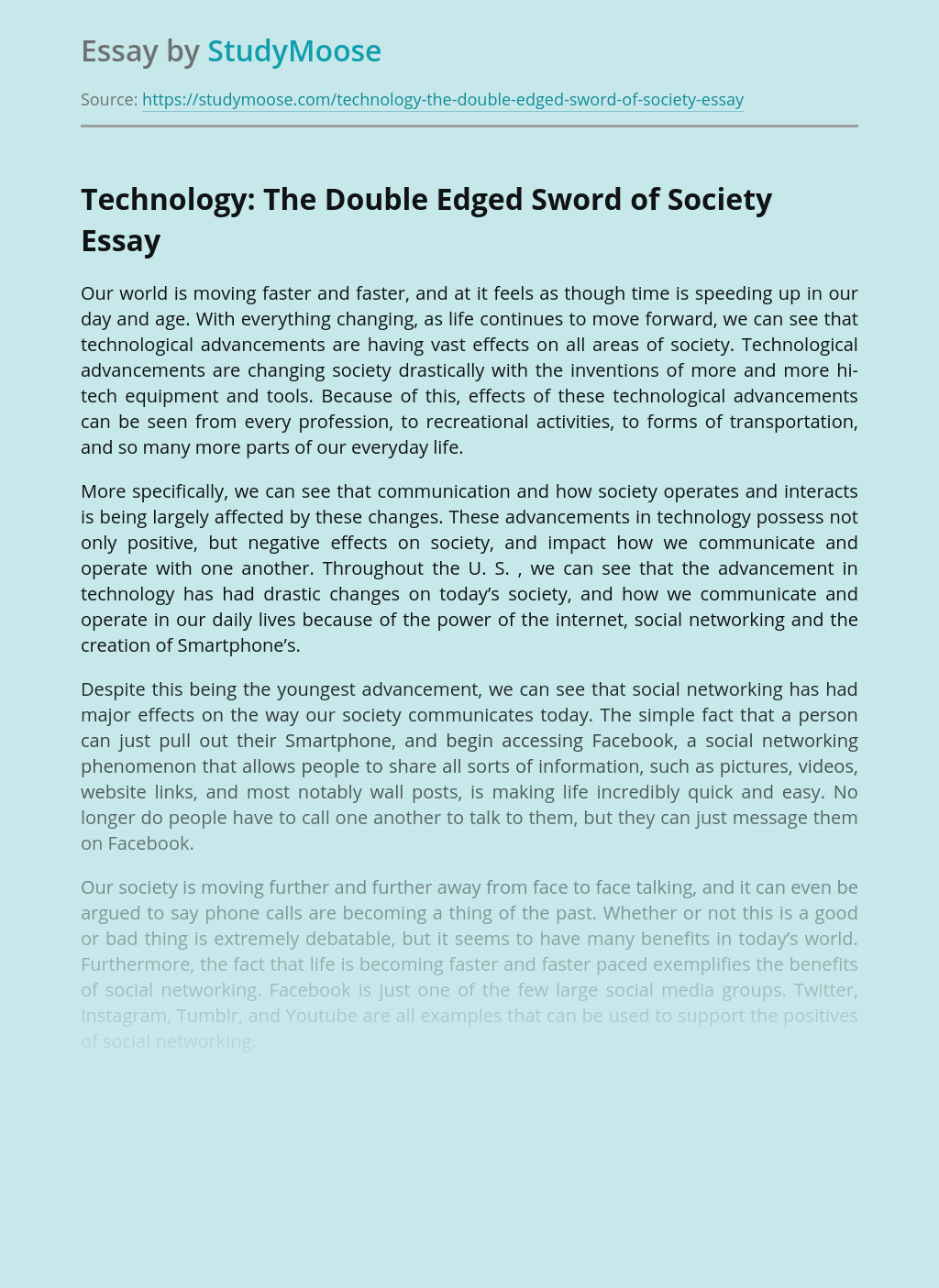 Turn in your highest-quality paper
Get a qualified writer to help you with
“ Technology: The Double Edged Sword of Society ”
Get high-quality paper
Helping students since 2015
Stay Safe, Stay Original