Technology in "1984" by George Orwell

The technology in Oceania was used to monitor people to make sure that they are not committing any crimes against Big Brother.

Don't use plagiarized sources. Get your custom essay on
“ Technology in “1984” by George Orwell ”
Get custom paper
NEW! smart matching with writer

In 1984, it says, “It was terribly dangerous to let your thoughts wander when you were in any public place or within range of a telescreen. The smallest thing could give you away. A nervous tic, an unconscious look of anxiety, a habit of muttering to yourself… the suggestion of abnormality, of having something to hide…to wear an improper expression on your face…was itself a punishable offence” (Orwell 62).

All Party members have a telescreen where they live that cannot be turned off, so a telescreen would be watching them all the time at their homes and they would be watched in public. In The New York Times, “In a Growing Number of Stores, Hidden Security Microphones Are Listening” it says, “…devices, which record conversations on tape…another tool to prevent theft…by burglars or employees…monitor how workers treat customers…some can also pick up private conversations in booths 25 feet away…concealed cameras, some secreted behind one-way mirrors in department stores, is also rising.

” (KILBORN, PETER T. “In a Growing Number of Stores, Hidden Security Microphones Are Listening.” The New York Times, The New York Times, 28 May 1994). Today we have surveillance cameras that watch people so they do not commit crimes. We also can use audio recording to listen in on conversations which are kind of like the hidden microphones in the book. The article was from 1994, so by now the things people have now to monitor others have probably increased in quality and may have gotten even better than before.

In the novel, Oceania has the technology to make their jobs easier as well. Things like the versificator allow for the people to do other jobs, but it also limits imagination because people aren’t thinking up of song lyrics or what happens in a book since they have a machine to do it. The versificator is a machine that was created to produce things like songs and books, so that the Party members would not have to use any creative thinking. In the novel, it says, “…produced rubbishy newspapers containing almost nothing except sport, crime and astrology, sensational five-cent novelettes, films oozing with sex, and sentimental songs…composed entirely by mechanical means on a special kind of kaleidoscope known as a versificator.” (Orwell 43). The Party can control what the versificator creates so people would be getting propaganda and biased or made up information. Modern day technology can’t quite do that yet, but artificial intelligence may be able to eventually come up with things like that. In WIRED, “Does The Technology of Orwell’s 1984 Really Exist?”, it says, “…That said, a machine might produce the outlines, plots, themes and characters that a totalitarian government might choose to limit prose entertainment to.” (Beschizza, Rob. “Does The Technology of Orwell’s 1984 Really Exist?” Wired, Conde Nast, 4 June 2017). This supports that a modern day machine might be able to do at least some of the things the versificator can. Winston’s speakwrite is similar to today’s artificial intelligence. In “ George Orwell’s 1984 Technology: How Close Are We to Big Brother?”, it says, “…a type of artificial intelligence called natural language processing…it needs to be trained to understand your voice, accent and dialect, and you still need to proofread everything it creates…become more proficient at transcribing your words over time.” (Jackson, Jon, et al. “George Orwell’s 1984 Technology: How Close Are We to Big Brother?” Decoded Science, 20 Jan. 2013). This paper says that there is a form of technology today that can identify voices and respond, so George Orwell was not to far off in his ideas.

Technology was also used by Oceania to harm others in war. “Helicopters are more used than they were formerly, bombing planes have been largely superseded by self-propelled projectiles, and the fragile movable battleship has given way to the almost unsinkable Floating Fortress; but otherwise there has been little development. The tank, the submarine, the torpedo, the machine gun, even the rifle and the hand grenade are still in use.”(Orwell 195). The quote talks about the technologies they have that is used in the war made for the purpose of killing. We have similar technologies today that we use in warfare. In WIRED, “Does The Technology of Orwell’s 1984 Really Exist?”, it says, “…naval warfare would produce ever-more powerful and larger vessels. While World War II demonstrated the supremacy of aircraft carriers for the first time…appeared to many as if there was no real limit to the effective size of a ship of war.” (Beschizza, Rob. “Does The Technology of Orwell’s 1984 Really Exist?” Wired, Conde Nast, 4 June 2017). If there is not a warship close to the Floating Fortress than most likely there will be one in the future. The quote supports that because it says that there is that possibility of producing because of our innovations. These technological advancements would have been created to kill other people, like 1984.

Technology is something detrimental based on what is shown in the novel and in the real world. Technology could be used to control people and violate their privacy, take jobs away and reduce the need for thinking, and used in warfare to kill. Although technology could be used to help and could be beneficial for people, it could also be used for awful acts and could hinder instead of help humans in certain areas. The people who use technology might misuse it and cause harm to others or use it for ill intentions. The use of technology shown in the novel as well as modern day shows just how detrimental it can be to people. 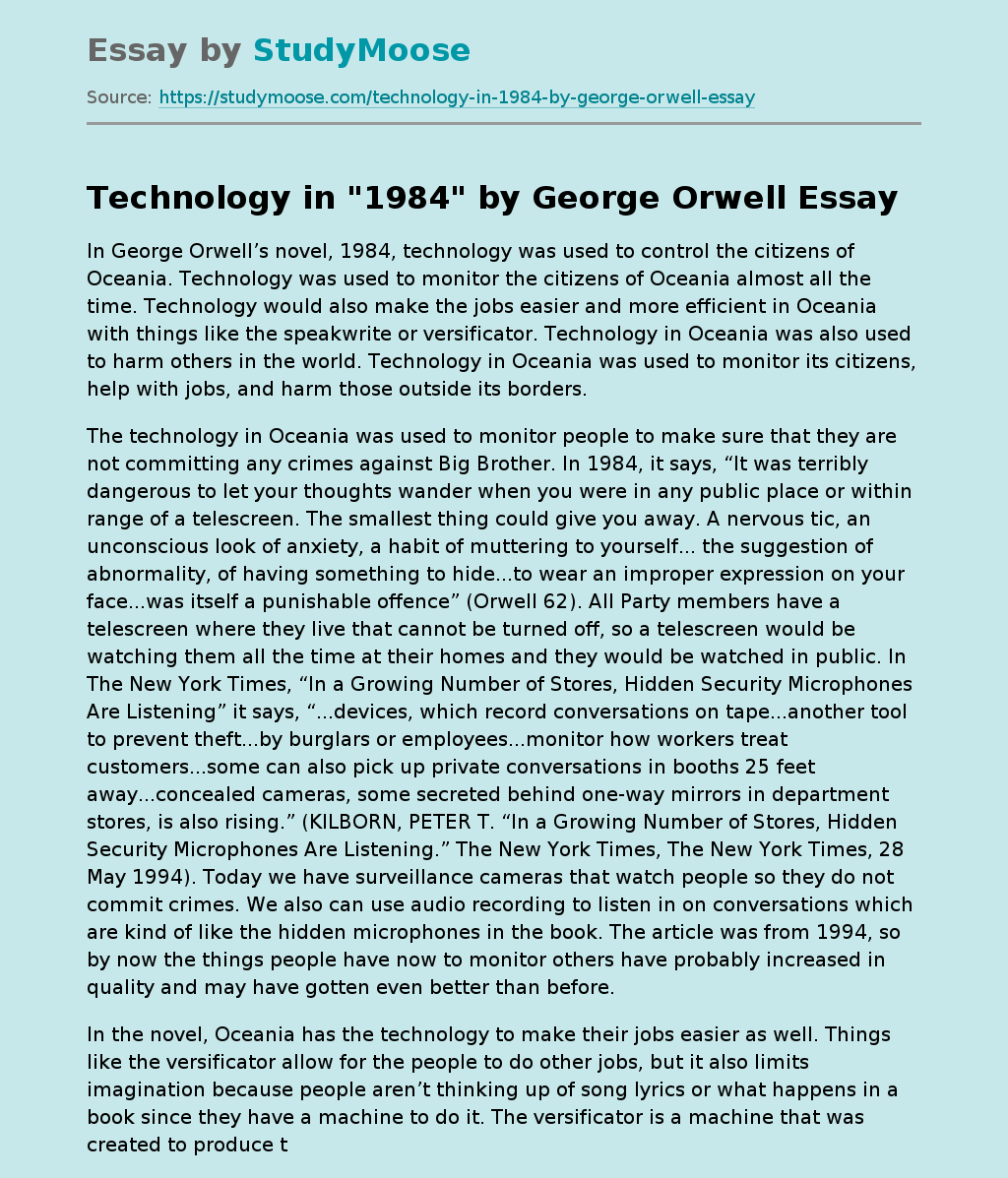