The highly anticipated and much celebrated release of the newest and perhaps hippest cellular phone on the market has spurred a number of discussions on the applicability of these devices to other forums. With an increasingly large number of prepubescent teens and children carrying cellular phones everywhere they go, a number of educators have begun to inquire as to its applicability as a teaching aid while there are some who argue that cellular phones have no place in today’s educational institutions.

Don't use plagiarized sources. Get your custom essay on
“ Technological Advancement of Cellular Phones ”
Get custom paper
NEW! smart matching with writer

There is certainly no clear yes or no answer to this issue and instead it is important to arrive at a certain compromise in order to resolve this issue. There are basically two schools of thought behind this issue, the pros and the cons. The first argues that the changing times and evolving technology necessitate the use of these new devices in order to improve educational methods and take advantage of the ever decreasing attention span of students with regard to traditional teaching methods.

The second school of thought, on the other hand, argues that the older methods which have been tested and tried are always better and thus these distractions (cellular phones) should be strictly kept out of classrooms. In order to, however, come up with a reasonable discourse concerning this topic it is first important to examine just how these devices have affected classroom activities. “Cell phones connect friends and families. In a moment, across the country or oversees a parent can call his son to see whether he is doing alright”.

Businessmen can make their business deals and get everything done when away from office. Newer programs event take advantage of the cameras that most of today’s cellular phone models have by allowing one to take a picture of a page and have that file converted into a document that can be edited as reported in the October 29, 2007 issue of Newsweek entitled, “How to Make the Cellular Phone a Portable Scanner. ” (Ellison, 2007, p. 1)

In the same way that businessmen take advantage of the ever increasing conveniences that cellular phones have provided, students at schools all over the country communicate frequently with each other through the use of cell phones and this is the case of concern for most of the country’s school administrators (Armbruster-Sandoval, 2005, p. 64) The first school of thought, as presented earlier, argues that instead of banning these cellular phones from classrooms, an alternative can be reached. There is no need to reject this technology advancement but rather there is a need to embrace it and take advantage of it.

With the average classroom attention span in the United States dropping, more and more educators have come to realize that there is a pressing concern to come up with new methods of teaching that is able to reach out to these children and one of these solutions is the cellular phone. In response to this, however, detractors have argued that this instant method of communication has its own drawbacks as well. Cellular phones are said foster interpersonal relationships as opposed to direct communication which provides a certain level of personal interaction.

The essential factor or edge of having the instructor or teacher personally present to ensure that the student is able to learn will certainly be diminished by using cellular phones as a mode of conveying lessons and learning modules. The second bone of contention with regard to cellular phone use in the classrooms has arisen out of the recent traumatic events that have rocked the American educational institutions. The Columbine tragedy and even perhaps 9-11 have made parents more concerned over the safety of their children and have demanded that schools allow the children to bring these devices into the classroom.

In response to this rising safety issue, more and more schools in the United States have begun lifting the ban on cellular phones in classrooms (Shaw, 2005, p. 1). When Mayor Bloomberg banned cellular phones from New York public schools, most of the uproar that resulted from the institution of that policy came, not from the school children as previously anticipated, but rather from concerned parents who argued that the lack public payphones in the area made it more dangerous for their children (Williams, 2006, p. 1).

While certainly it may not have an effect on the lessons that these students learn in classroom, it does affect the quality of education a child may receive since a concerned parent may relocate the child to safer place which may not provide as good a quality of education as the previous school. While there is certainly no doubt that the safety of children is of the highest priority, there is also a need to educate today’s youth if they are to stand a chance of surviving in this world.

Another issue that has been presented is that cell phones lead to the deterioration of writing skills as the use of the text messaging feature leads to what has been termed txt-lingo. For some, “text messages, a popular phone feature has affected the English language” “That is (that the use of) abbreviated messages has also affected the use of vowels” (Silin, 1999, p. 20). This issue has even been made worse by the fact that the new dictionaries or rather predictive text feature on cellular phones make it easier for students to just tap away at the keypad with the phone doing the corresponding spelling changes.

The loss of not only personal but grammatical communication skills is indeed an issue which must be tackled in response to the topic on whether or not children should be allowed to bring cellular phones into the classroom. It is important to remember, however, that even though the above argument may present a grain of truth, learning is simply much more that just missing vowels and spelling. Education has never been confined to the teaching of English but rather even to the discussion of the propriety of bringing cellular phones into the classrooms (Shaw, 2005, p. 1).

As such, to even argue that cellular phones should not be brought into the classrooms because it leads to bad spelling skills would be totally disregard the other benefits that can be derived from the use of such a device. Benefits such as being able to send images of certain objects that may be used for a lively and scholarly discussion in class, encouraging discourses between students over certain topics and certainly the building of foundations for the educational improvement of today’s youth, far outweigh the simple problem of lacking vowels which can be easily remedied (Shaw, 2005, p. 1).

Perhaps the answer to this problem lies in the students themselves who use these devices as argued be certain concerned parents. There are some parents, who can claim that their children are very responsible, and they know when to put on or put off the cell phone and therefore should be allowed to use cell phones even in schools (Fretcher, 2000, p. 69). According to Armbrustor-Sandoval, “Teenagers have learned to heavily rely on cell phones” thus transforming this into a serious issue. This is why the government is contemplating on banning cellular phones in not only classrooms but inside campuses as well.

Banning cellular phones in most educational institutions is a good idea but some exceptions should be allowed since cellular phones can be used in reporting emergencies and the like (Armbrustor-Sandoval, 2005, p. 71). If parents cannot control their own children with regard to the use of cellular phones in education institutions, the question that begs to be asked therefore is whether or not the government is more qualified to make that decision and enforce is it for the students. There is no doubt from this brief discussion that there are indeed a number of pros and cons concerning this issue.

Cellular phones have improved dramatically over the last few years. With the rate of technological advancement today, it is not far off into the future when cellular phones will be able to do certain things that were but unimaginable in the present. The question, however, is whether or not all these advances will remain to be benefits for just a certain group or if they can be used to improve every aspect of life (as most of the cellular phones are currently trying to do i. e. I-phone). The benefits and drawbacks are certainly very clear.

The problem for the government and most educational policy makers is on how to balance these benefits and drawbacks so as to be able to take full advantage of the situation (Shaw, 2005, p. 1). As such, the only solution that remains is coming up with a well thought out cellular phone policy for the school in order for them to be able to continue to reflect the society which they serve. 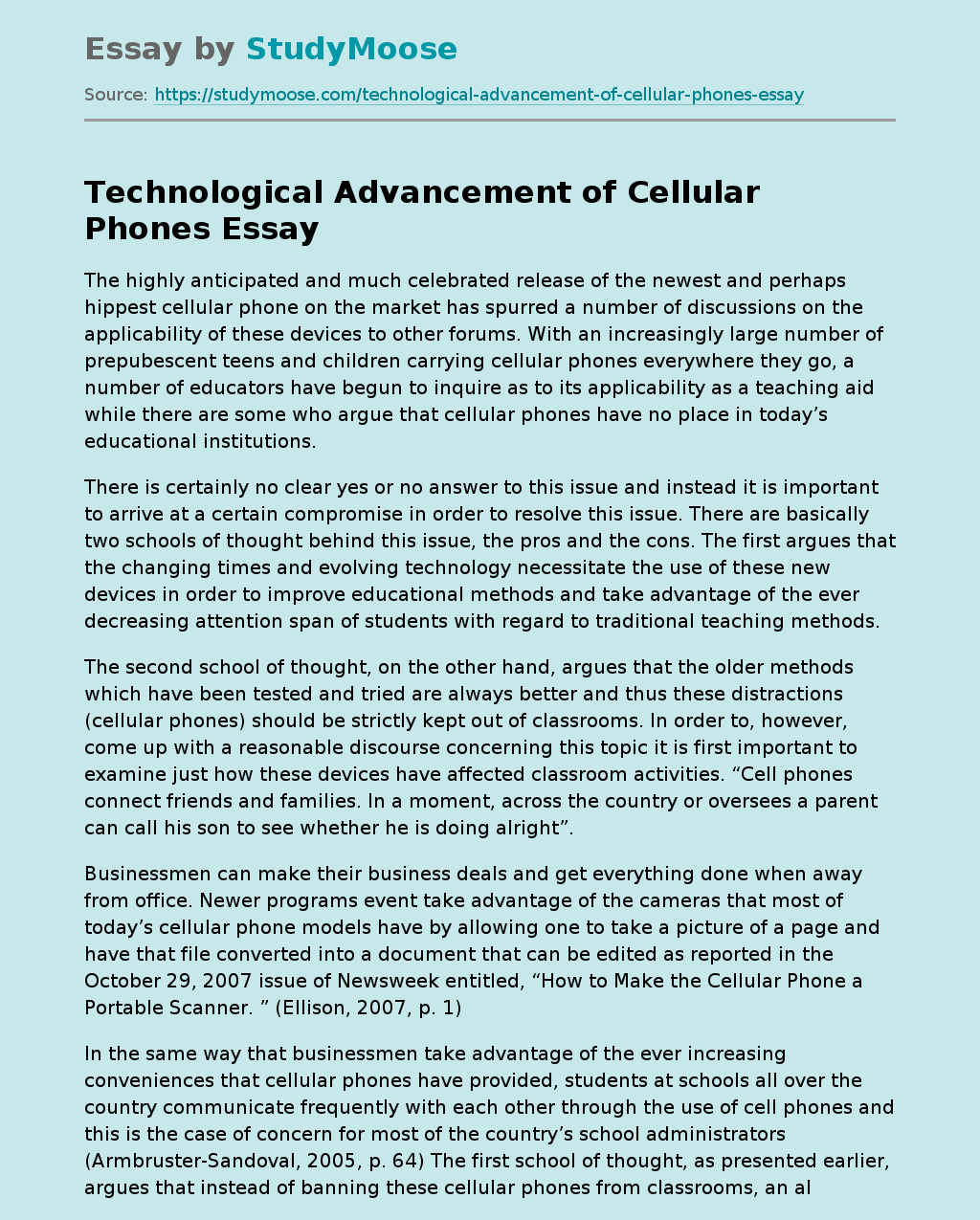