Peplau’s Contribution to the Advancement of Nursing Knowledge

Peplau’s Contribution to the Advancement of Nursing Knowledge in Support of Multidisciplinary Science Nursing is still a young profession that is still evolving. It is still developing its theoretical support for the nursing practice and how its discipline is unique from other disciplines (Johnson, B. & Webber, and P.). Many of the nursing theorists have drawn from other disciplines (psychology, sociology etc.) in forming their nursing theories. Hildegard Peplau is one of those theorists who used another discipline in formulation of her Interpersonal Relations in Nursing Theory.

Don't use plagiarized sources. Get your custom essay on
“ Peplau’s Contribution to the Advancement of Nursing Knowledge ”
Get custom paper
NEW! smart matching with writer

It is important to know Peplau’s nursing education in order to understand how she came to think and perceive the nursing profession, its practice and theory, particularly with an influence from the science of psychology.

Peplau entered the nursing profession after earning a diploma in nursing at a hospital in Pottstown, Pennsylvania. She took a variety of nursing positions and within a few years, she earned her Baccalaureate Degree in Psychology. It was then that Peplau really began to form her ideas about psychiatric nursing and the nursing profession (Holden, 2002). She worked in psychiatric nursing afterwards and was greatly influenced from working with Eric and Frieda Fromm, who were highly influential and successful psychologists at that time.

She was also in contact with and influenced by Harry Stack Sullivan. During World War II she stationed in London at a neuropsychiatric center. While she was there she had conversations with many significant people in psychiatry.

During her shifts, the psychiatrists would discuss their cases and it became an extension of her psychiatric course work from her Bachelor Degree in Psychology (Holden, 2002)Afterwards, over several years, Peplau earned her Masters and Doctorate Degrees at Teacher’s College at Columbia University and her Doctorate in Education (Parker & Smith, 2010). She was also certified in psychoanalysis by the William Alanson White Institute of New York City, in the early 1950’s. In her career she not only developed the Interpersonal Relation Theory of Nursing but developed several graduate psychiatric nursing programs (Holden, 2002).

Hildegard Peplau received special recognition by the ANA Council of Advanced Practitioners in Psychiatric/ Mental Health Nursing. Because of her extensive education and exposure to the science of psychology (and some of its finest professional member’s), she was able to pave the way for psychiatric nursing within the nursing profession. Up until her influence, it was the nurse’s responsibility to simply administer the medication the psychiatrists ordered and assist the patient with basic health care as needed.

Peplau’s Support of Multidisciplinary Sciences in the Field of Nursing It is obvious that Peplau’s development of the Interpersonal Relations in Nursing Theory also was birthed out of her psychology/psychiatry education and experience. It was her goal to bring psychiatric nursing to more that nurses giving medication and caring for basic physical needs. She was the mother of psychiatric nursing. She paved the way for nurses to practice psychotherapy by first training them to “talk to patients”. Her theory was greatly influenced by Sullivan’s Interpersonal Theory. Sullivan was the first American psychiatrist to develop a Comprehensive Personality Theory and saw psychiatric problems as being developed from bad interpersonal relationships. (Slide show site). Peplau also utilized the discipline of “education” to further her development and promotion of the Interpersonal Relations Theory.

She also utilized it to train other’s in more advanced ways of practicing as psychiatric nursing (Holden, 2002). Peplau did not only show her approval of using the multidiscipline sciences in nursing by utilizing them in her practice and teaching, but she taught that this was the best practice to do in the field of nursing. In an interview that was done in 1999 she was questioned on the use of other disciplines by nursing and was it acceptable for nurses to practice using someone else’s knowledge. She answered by first saying that she promoted scientific research in neuropsychiatry, genetics and biochemistry and had served on government committees regarding them. She believed that it was important for nurses to continue to study and know about human beings biologically and about their existence in the environment (Spray, 1999).

She confirmed that she always supported the development of all social sciences. She hoped that “the basics of science (neuroscience, biology, and brain research) and the social sciences (the psychosocial humanistic piece), that is, the connections and the integrations of these, will be identified and formulated “ (Spray, 1999). In saying that she validated the use of all knowledge, coming together so as to serve nursing in becoming its best. The writer believes, with many others, that Hildegard Peplau was a great pioneer in the nursing profession and not only supported multidiscipline of sciences for use in nursing but exemplified it wonderfully. Literature Review on Peplau’s Theory of Interpersonal Relations Theory of Nursing

A literary review, using the subject for research as “Peplau’s Interpersonal Relations Theory of Nursing” was done using ProQuest’s website for peer-reviewed literary articles. The result is that the subject was discussed in 95 peer reviewed journals and two trade journals. Using Google Books a research was done using the same. There were too many books, including psychiatric text books by Brunner and Saddarth and Lippincott, which included a full description on Peplau and her founding nursing theory. It is quite obvious that her theory has been adopted by nursing profession. She has been called the “mother of psychiatric nursing” (Holden, 2002).

Peplau’s Contribution to the Advancement of Nursing Knowledge. (2016, Mar 20). Retrieved from https://studymoose.com/re-peplaus-contribution-to-the-advancement-of-nursing-knowledge-essay 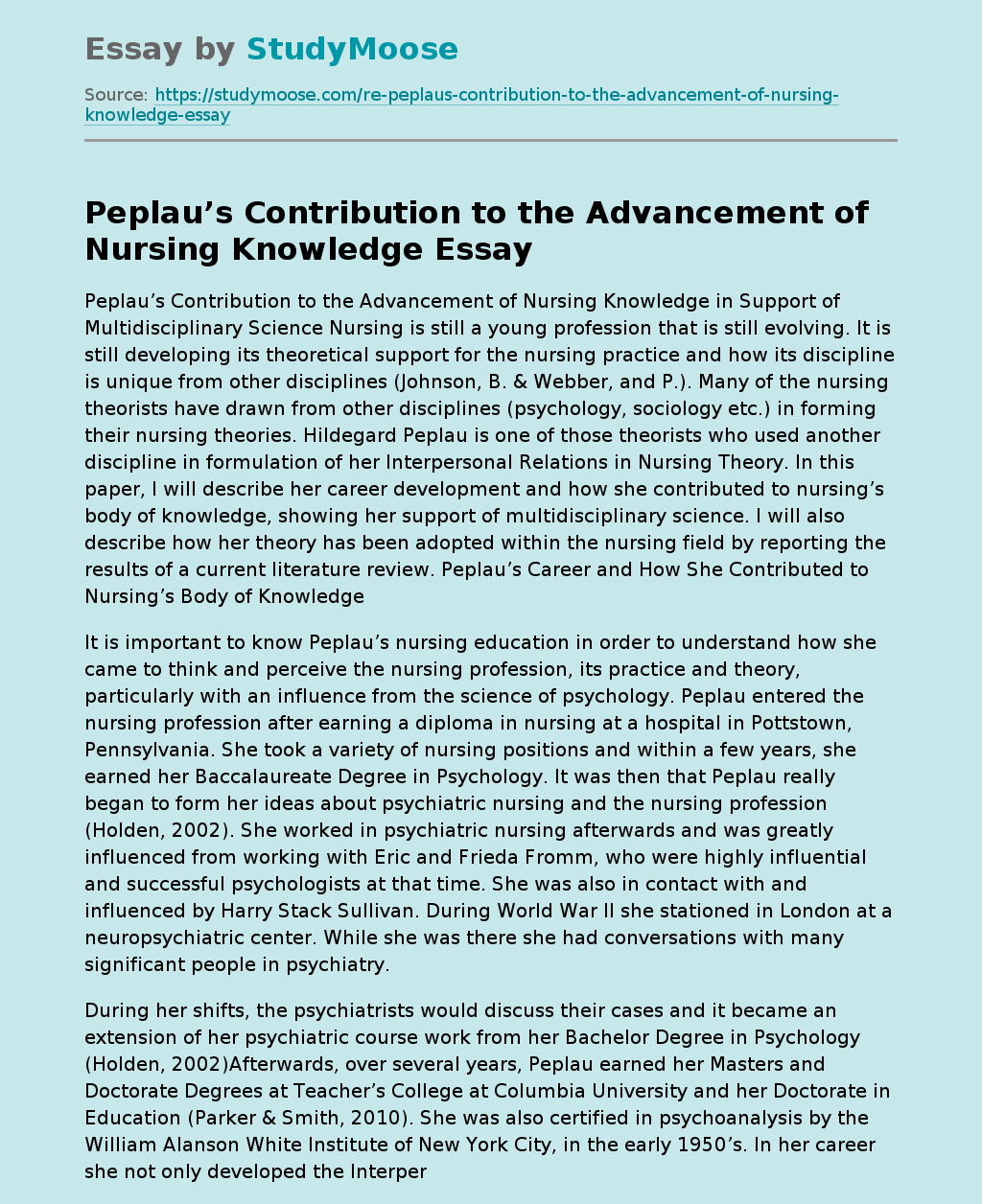