“Critically evaluate (using no more than 750 words) the claim that Taylorist and Fordist Management control methods increased organizational productivity at the expense of employee job-satisfaction” Taylorist and Fordist management control methods have had the most influence impact on organisational production till present day. Taylorism, also know as scientific management was developed by Frederick Winslow Taylor (1856 – 1915) based on making labour more efficient.

Taylor believed that “the best management was true science ‘resting upon clearly defined laws, rules and principles’” (Wilson, 2004). In order to gain control over the workforce, all three key principles needs to be achieved.

Don't use plagiarized sources. Get your custom essay on
“ Taylorism and Fordism ”
Get custom paper
NEW! smart matching with writer

Taylor’s principles are, produce rules, laws and formulae, take brain work away form the factory floor, and plan out, give written instructions to every worker on exactly what to do (Braveman, 1974).

Fordism was named after Henry Ford, an American car manufacturer who pioneered mass production based on direct controls over the workers. According to Braverman, there are three principles to Taylorism, “the dissociation of the labour process form the skills of the workers, the separation of conception (the thinking about how work is done) form the execution (doing) of the work, and the managerial use of the monopoly of this knowledge to control each step of the labour process and its mode of execution”.

In this essay, the claim of that Taylorist and Fordist management control methods increased organization productivity at the expense of employee job-satisfaction will be evaluated by using various case studies. Scientific management can be seen in McDonaldization, which is “the process by which the principles of the fast-food restaurant are coming to dominate more and more sectors of American society as well as the rest of the world” (Ritzer, 2008, page 1).

Is it based on four components emphasized by Ritzer, efficiency, calculability, predictability and control.

McDonaldization’s approach carries all the key principles of scientific management and has proven to be very profitable with revenues of $21. 6 billion in 2006. Other businesses that have shown to follow this theory are IKEA, blockbusters, and Pizza Hut. We can apply McDonald’s to Ritzer’s four components; in efficiency, McDonald’s is able to have an advantage because they can provide customers with a standardised product in a short amount of time, this can be seen in the drive-through that McDonald’s has adopted.

In calculability, the speed of the service and the portion size. In predictability, customers will receive the same service wherever they go and for the workers, their jobs are highly repetitive and predictable. In control, the workers don’t have as much responsibility as the customers leave the drive way before eating their meals. Although McDonald’s focus is on producing large amounts of products in a speedy fashion has proven to increase their overall organisation productivity, this approach also shows numerous limitations.

In efficiency, McDonald’s speedy fashion also results in having homogenous products; customers would always expect the same Big Mac or Cheese Burger. In calculability, the work routines are also very highly standardized. In predictability, customers will always be able to predict what products the will get from McDonald’s, they cannot specialize their product, and customer demands and actions will also be homogeneous, for example, having a more well-done burger.

In conclusion, at the expense of employee satisfaction, Taylorist and Fordist management control methods will increase organisation productivity. This can be seen in many fast-food restaurant businesses, where the business focuses on mass-production. The focus on producing large amounts of products is seen to be successful as seen in McDonald’s revenues in 2006. However, mass production can have many weaknesses and limitations. The focus on producing products in a speedy fashion means that customers knows what they will get from McDonald’s anywhere from around the world. 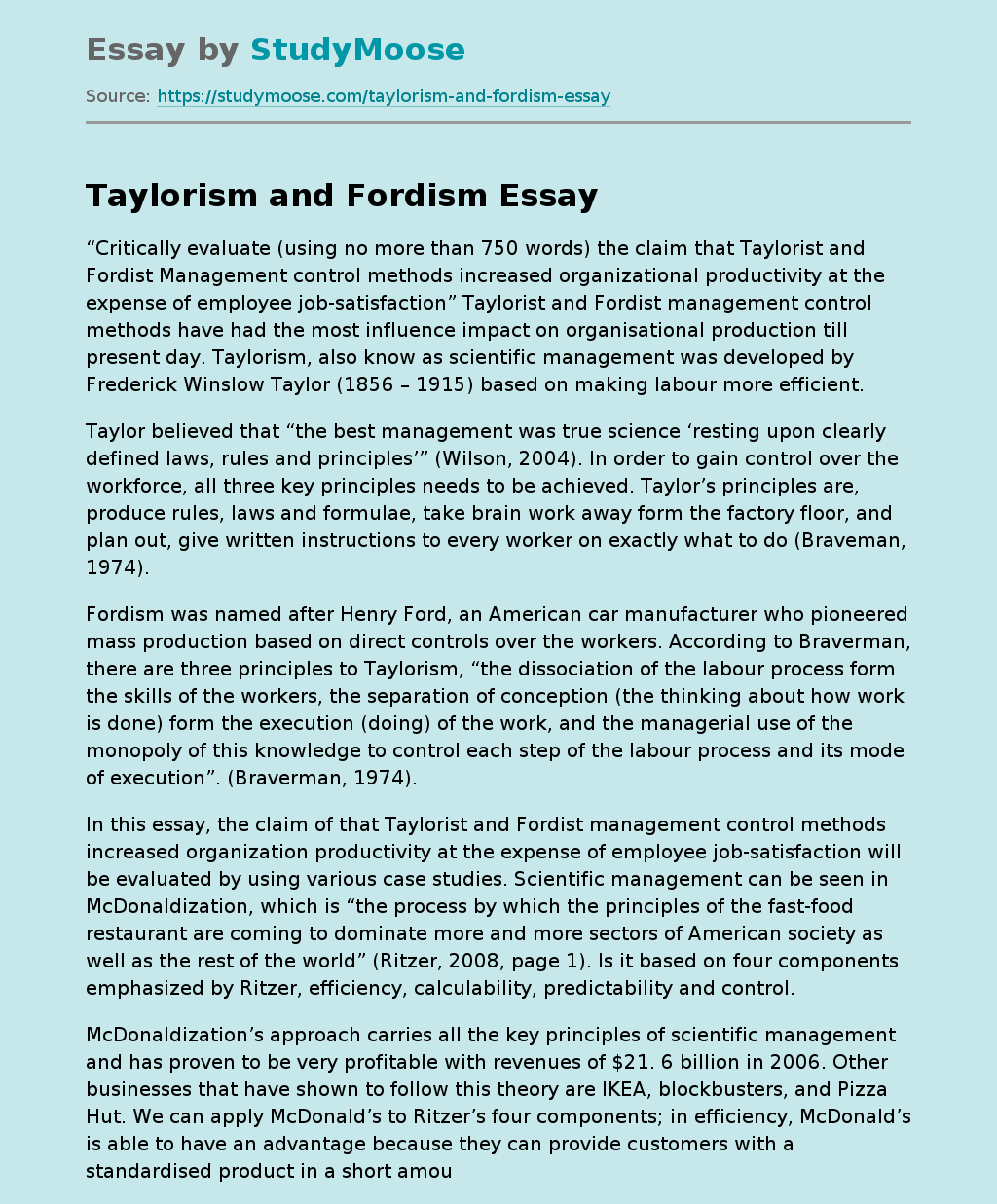