The sacrifice of one’s own life for the person they love is by far the ultimate sacrifice any human being can make. In A Tale of Two Cities, by Charles Dickens, Sydney Carton, a despondent and inebriate man, did exactly that. Through his sacrifice, he became the most memorable and dynamic character in this book. Sydney Carton was an unmotivated alcoholic who transformed his wasted and useless life by performing a selfless act of heroism. “I am a disappointed drudge.

Don't use plagiarized sources. Get your custom essay on
“ Tale of Two Cities Character Analysis ”
Get custom paper
NEW! smart matching with writer

That was Sydney Carton’s abridged explanation for his disposition when he meets Charles Darnay. In the beginning, Carton is a lazy, alcoholic attorney who cares about nothing in life. He is self-undermining in that he has no confidence or volition and believes his life is an extreme waste. He is crude, frequently drunk, and melancholy. He feels he is stuck in the disappointed course of his once promising life, and has nothing worth giving anymore.

Around the middle of the book, Sydney Carton makes a remarkable transformation into a man of profound merit.

He professes his love to Lucie saying, “For you, and for any dear to you, I would do anything. I would embrace any sacrifice for you and for those dear to you,” (page 128). This scene marks a vital transition for Carton and lays the foundation and foreshadows the supreme sacrifice that he makes at the end of the novel. Lucie was the only one who thought there was a good person in Carton, and inadvertently succeeded in transforming him from depressed and dejected into a caring and altruistic man.

Sydney Carton’s promise to Lucie took him to the guillotine at the end of A Tale of Two Cities. He died for Darnay, which he believes is the greatest thing he could do to make his life significant. His death lets the woman he loves be happy. He quotes a verse from the bible saying, “I am the resurrection and then life, saith the Lord; he that believeth in me, though he were dead, yet shall never die; and whosoever liveth and believeth in me, shall never die. This verse becomes almost his theme of the rest of Carton’s changed outlook of life.

Sydney Carton’s resurrection from his concealed life by his love for Lucie is gained by giving up his life for her happiness. He goes to death with the satisfaction of knowing that his life now has meaning, which is what Carton was searching for throughout the novel. During his life he was unable to act in his own self-interest, but, paradoxically, he’s completely willing to sacrifice his own life so that another man may live to please the one he loves.

Sydney Carton sacrificed his life for Lucie, the only person who made him feel his life had meaning—just like he had promised to her. He began as a drunken man with no purpose, but only in the sacrifice of his life did Carton establish his greatest worth. Essentially what makes him the most memorable and dynamic character of A Tale of Two Cities is this predominant resurrection. In that all that was good in him and his love for Lucie lives on in Darnay, and he is now defined not for what he was, but by his single greatest act. 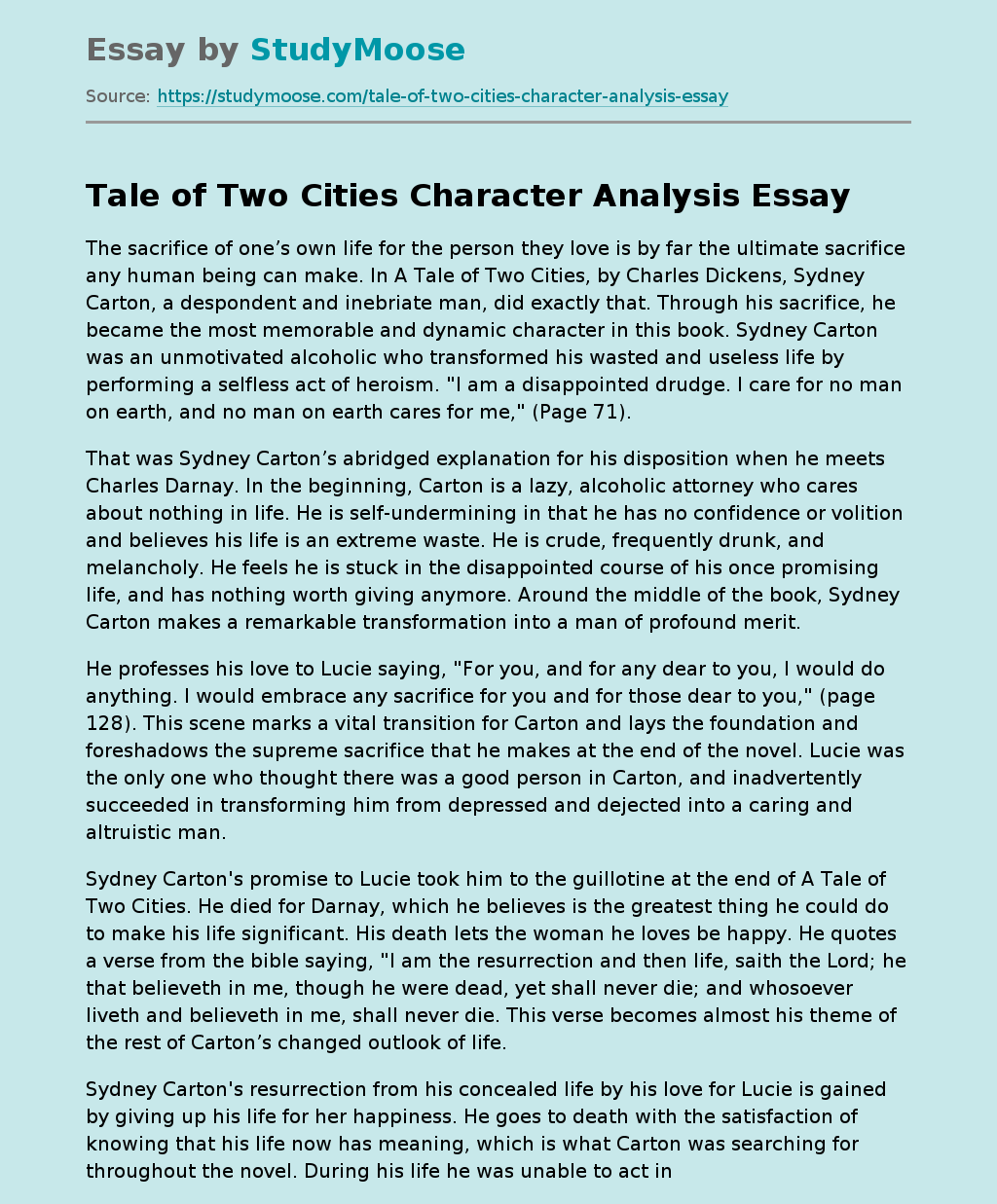