Table Manners between China and America

Manners reflect one’s personality. Table manners are art that reveals one’s culture. There are many table manners around the world. It is also necessary to learn more table manners because of the rapid process of globalization. Using utensils, eating gestures, and serving food are different between China and America.

Frist, using the utensils is different between China and America. In the United States, people would like to put their plate on the table when they are eating. On the contract, people in China would hold the bowl close to their mouth when they are eating, which is a polite action.

When setting the bowl for the guest, it is impolite in setting them parallel, which represents the bad luck. People in America only use the spoon to eat dessert or drink soup, and they usually use the fork and knife to eat entrees, but in China people prefer to eat with chopsticks and spoons. In addition. It is rude if chopsticks are stuck straight up in the bowl; because it makes the bowl similar to the tomb and Chinese people do not like it.

Second, the gesture when eating is different from China to America. People in America will think that it is rude to make the sound made from chewing. But In China, if you are eating with a loud sound, it will not be criticized, at the same time, the host will think that you must love the food, and which will satisfied the host. In America, when having a party, it is liberal to leave before others leave, but in China, people should not leave before all the people have already finished their meal.

Because leaving the table early might be considered you do not respect other people.

Third, the table manner of serving food is different from America to China. People always serve food for themselves in America although their relationship is really close. Chinese people like to serve guests food many times, and each time they might make the guest’s bowl full of food in order to let the guests eat more and show their respect to the guests. On the other hand, if the host serves a drink, you can reject it in America, but in China, you have to drink when the host gives you some beverages, although you might not really want to drink. Because you have to respect the host in table. In addition, if you want to cooperative with the host, the host might want to cooperative with you because of your genuineness.

Overall, the table manner are different between China and America. And it is also an essential knowledge to help you to understand other country’s culture. Furthermore, as long as you master this knowledge, some awkward situations can be prevented.

For people around the world today, eating is life. But you cannot eat in whatever ways you like, for you might bother someone else on the eating table. That’s why there are table manners: a type of etiquette used when eating. Different cultures have different standards for table manners. And next, we are going to compare the Chinese table manner and the American one. First, let us begin with their similarities. Chinese people put communal chopsticks on the shared plates of food, while the American uses forks and spoons as communal utensils on the dishes like the salad bowl. Another thing in common is that they both forbid the playing with utensils. You cannot wave them or bang them like drumsticks, or use them to move the plates. Your two hands are asked to be in use.

Hold your bowls in the Chinese culture or grab the fork and knife with your hands in the American customs. Do not let any of your hands does nothing but lay it on the table. If you want to place your hand on the table, put it aside your plate. But these rules would be a demand too harsh in casual situations like eating at home. There are too many differences between Chinese and American table manners. Before presenting the differences, we would like to introduce some of Chinese special manners. We should decide what to pick up before reaching for the food with chopsticks. Do not hover around or poke looking for special ingredients. After you have picked up an item, do not put it back on the dish. In addition, it is traditionally polite for the youngest members of the table to address each and everyone of the elder members of the table before a meal starts and literally tell them to “eat rice”, which means “go ahead and start the meal”.

This is a sign of respect to the elderly as they play important roles in Chinese traditional society. The differences existed between Chinese and American table manners are much more than similarities. First of all, American consider speaking loudly with mouth opened, seeing the food that you are chewing in the mouth as improper and rude. But in Chinese culture, we often see people speaking loudly with each other when eating; it is totally acceptable. Furthermore, it even looks awkward for the Chinese when family and friends sit together at a dinning table without any conversation; this silent situation may be reagarded as speechless and will make the party feels embarrassed. Secondly, the dinning utensils used by the American, usually forks, can be held by both right and left hands.

However, Chinese people consider holding chopsticks with left hand as impolite. Therefore, even if you are a left-handed person, you still have to use your right hand. One possible explanation for this restriction is that if there are someone using right hand and the other using left hand, their chopsticks may collide with one another; this is a sign of conflict and should be prevented. Thirdly, there is a very strict cultural taboo in Chinese table manner: never stab chopsticks into a bowl of rice and let them stand upwards. A stick standing upwards symbolizes the incense sticks offered to dead people. Thus, it is very offensive for Chinese people to conduct such an act. In contrast, American culture has no idea of incense sticks and so it is acceptable to stab dinning utensils on food.

A fourth difference between Chinese and American table manner is regarding whether one should finish his or her food or not. For the Americans, it is acceptable in most cases to not finish all of the food. Yet Chinese people have a saying that if you leave your food unfinished, you will marry a person with a pockmarked face in the future. Although a lot of people often neglect this warning, it is a virtue that is encouraged widely and educated to young children. Finally, Americans serve their food by passing dishes around and each person takes his or her own portion. As for the Chinese, dishes are put on the centre of the table and are picked up by the people surrounding them. Table manner is an art that reveals one’s culture. There is an old Chinese saying: eating is the priority of people. This reflects how important it is to eat properly in the right manner. Enjoy the exotic food and also try out the foreign table manner at the same time; you will find eating more than a routine act for survival!

Chinese and Western table manners have many differences in such aspects as tableware, table setting, seating arrangement, behaving at the table and so on. According to comparative research of these differences in this paper, it can help us analyze cultural differences between Chinese and western from value concept, moral criterion, social relation, history and custom. In this paper, the author is aiming at researching comparatively on Chinese and western table manners and finding out the reasons. The purpose is to prove the importance of improving our intercultural communication ability by means of doing the research on the different table manners and culture between China and the west.

Table Manners between China and America. (2016, May 01). Retrieved from http://studymoose.com/table-manners-between-china-and-america-essay 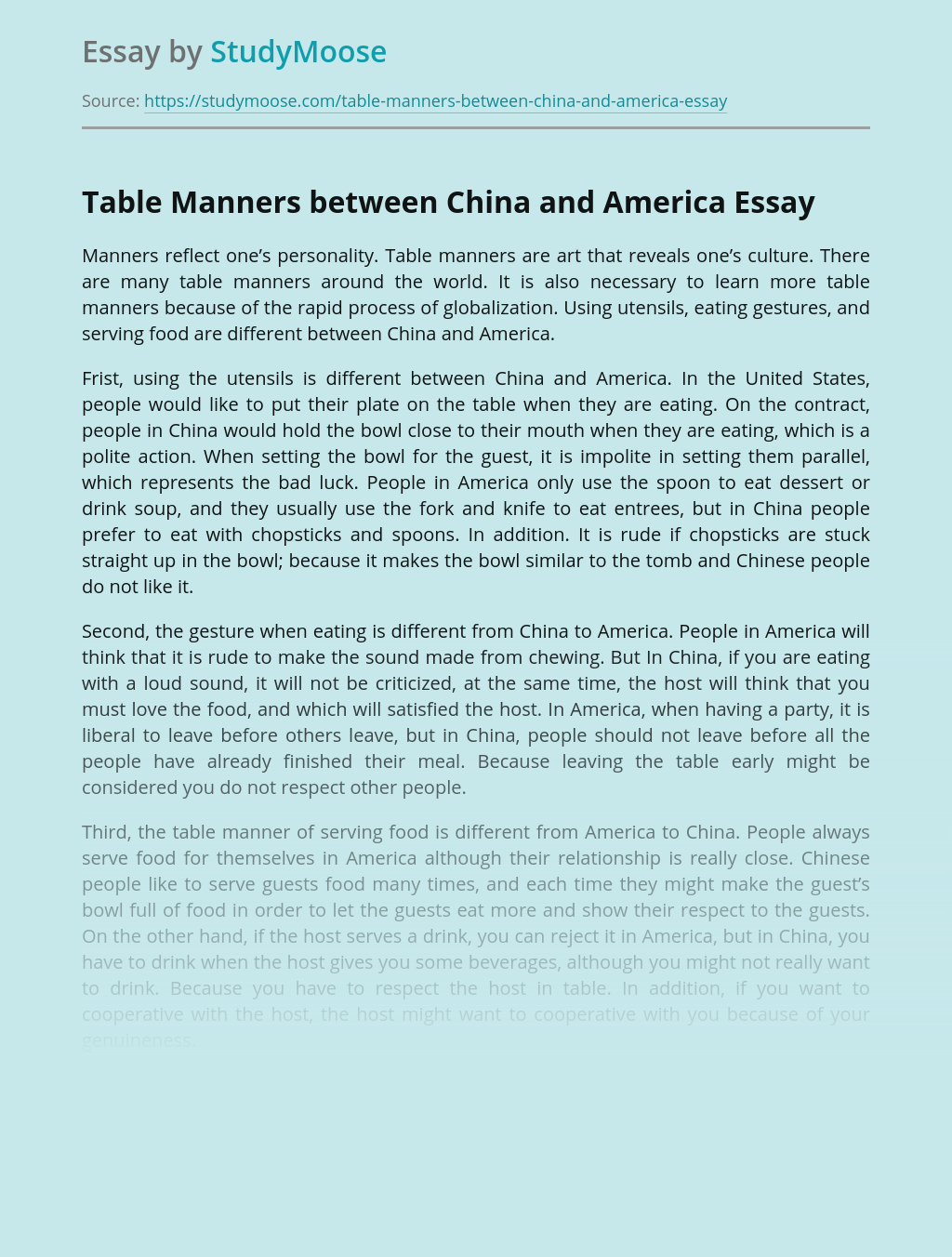 Don’t waste time
Get a verified writer to help you with Table Manners between China and America
Hire verified writer
$35.80 for a 2-page paper
Stay Safe, Stay Original