Don't use plagiarized sources. Get your custom essay on
“ Farm to Table Defined ”
Get custom paper
NEW! smart matching with writer

In the early 1970’s, there was a social movement that got restaurants buying fresh foods from local farms which was called “Farm to Table.” Farm to Table was an honorable movement because it raised the local economy, the fresh ingredients tasted better and was much healthier for the restaurants’ customers, which in turn made people who cared about eating healthy happier. Yet like everything, there are positive and negative effects to this.

One of the positive effects of Farm to Table is that local farms are being supported financially by local restaurateurs.

When restaurateurs buy from local farms, that helps those farms stay in business. It’s a good way to support your local economy. Buying from a local farmer helps the economy because the farmers get money to buy tools, feed and seeds for their farm which gives money to the town’s shops, where they get those tools and seeds. The town shop owners give money to their government and employees who themselves pay taxes and every once in a while, go to a restaurant that uses fresh local food.

This is a productive system where everyone comes out happy.

Although some would say that Farm to Table is too expensive for restauranteurs, because of the Farm to Table movement, many people are willing to pay the extra price for fresh, healthy food. According to Troy Johnson, a writer and food critic at San Diego Magazine in “Farm to Fable,” buying from local farms is “definitely more costly” (Johnson, pg 193). Restaurants who buy from local farms pay higher prices for their food. Buying the more expensive local food requires heightening the prices for restaurant meals, which goes directly to their customers’ pocketbook, driving away potential customers who might feel the price for fresh local food is too high. Though the prices are higher and the profit margin will be slimmer for the restaurateur, the customers are often happier when served fresh food, making them come to the establishment more often which slightly balances out the financial gap of the higher priced farm food.

Even big chain restaurants are able to make a profit using Farm to Table. One such restaurant is Chipotle, which uses only all organic and free range animals and non-genetically enhanced produce. There are over 2,500 Chipotle Restaurants in the world. This restaurant chain boasts of a 33 million dollar profit last year (Wall Street Journal). When you walk into a Chipotle, you will see their employees using fresh ingredients like homemade guacamole and salsa and fresh lettuce and onions. The range meat they serve is cooking right in front of you, then sliced and wrapped in a tortilla or salad. Chipotle is a Farm to Table restaurant that proves that big chains can have fresh ingredients without demolishing their financial structure. It is also a good idea to make your customers happy so they don’t give bad reviews. Chipotle’s reputation has an impact on smaller chains or single restaurants that are trying to promote Farm to Table menus as well.

Buying healthy ingredients from a local farm is far better than buying imported biomechanically engineered food for a number of reasons. One of them is that local farms can adapt to the specific farming methods that a restaurant or its customers fancy. As Johnson explains, “Ensure your buying from people whose methods match your restaurant’s and customers’ values, whether that means organic, sustainable, non-GMO, fair trade, etc” (Johnson, pg, 191). This brings comfort to the more ethical customers that like to acknowledge their eating and how it is affecting the world around them so they don’t break their moral codes. There are specific farms, companies and suppliers where restaurants have a hard time getting their product freshly to their buyer. Some places in America like Colorado or Utah can’t get certain ingredients fresh like seafood or fruit, so they have to ship it in from a seafood company in Maine or an orchard 300 miles down the road. A lot of restaurants like to use this as an excuse to buy processed or genetically engineered food. Even if they can’t get fresh ingredients locally, they can at least buy from companies that have an ethical method of growing their food and gathering their fish and other sea life. For example, a company that sells pole caught tuna instead of netting them which can kill dolphins or organic fruits as an alternative to using pesticides and bioengineering. Even though they can’t get it fresh, it is environmentally safer and healthier for their customers than the processed or mass produced ingredients overused by restaurants all over the country.

The “Farm to Table” movement also acted as a type of crowd pleaser. The movement brought restaurant healthier food to restaurants which pleased the healthy eating customers who pay more for local produce. But the produce goes out of season at some point in the year, so restaurants have to alternate between dishes and menus depending on what is available at their farms or vendors establishment. Yet this isn’t the worst thing in the world, personally I think it’s fun when restaurants swap menus. It gets the public to notice the restaurants more because they have to wait for their favorite dish to come back on the menu, just like when someone is waiting for a new season of their favorite TV show to come out. This is also good for the restaurants because if they have a dish that is favored by the crowd, they can anticipate what season they will have the most customers so they can be better repaired for the rush. And they can buy the dish’s ingredients earlier in the season so they can get ahead from any competitions so they can avoid any conflicts with other restaurants. After the movement came into full swing, converting hundreds of restaurants to become farm to table, it became hip to eat at those restaurants.

Hipsters now exclusively eat at restaurants that were supplied by local farms only for the trend, and it still is happening today, just look at anyone who eats at Freshii. Troy Johnson quoting Trich Watlington adds that “Farm to Table is hip, people want to think they’re eating locally sourced food” (Troy Johnson, June 24, 2015, pg, 193). Farm to Table restaurants had no trouble with this because it brought in more customers and revenue which is understandable. But people shouldn’t be eating at Farm to Table restaurants just because it is popular because it is not a good way to support a local government and they are just doing it for attention instead of doing it for health or moral reasons like they should be. This doesn’t mean don’t do or like something that is popular or hip, just make sure that when you do it your doing it for other reasons other than attention or status. Sadly though, there are other problems that Farm to Table unintentionally brings.

Farm to Table is a very fine movement that has a lot of health benefits to the people and to restaurant business across America, but it breeds a new problem that businessmen have been taking advantage for a long time. When restaurants go Farm to Table, they like to advertise where they get their ingredients and show off their new style of business, this is where it gets interesting. It isn’t a law or social requirement from the government for restaurants to switch to Farm to Table and there are no punishments on restaurants for not choosing from buying fresh foods and produce from local farms. So, restaurants with cheap owners decide to deceive their customers. They advertise that they buy from local farms but buy processed foods or have their goods shipped in from a different farm in another country. They are not just lying to their customers, but they are also ripping them off. Since fresh, organic local food is more expensive than cheap processed food, they have their customers pay the price of the more expensive dishes while the restaurant still serves them processed food.

Even if the restaurants don’t mark up the prices and only put out false advertisements about their food, they are still ripping you off. If someone walks into a restaurant that was lying about the freshness of the food, if they pay for a meal, then they are taking potential business away from the restaurant that is really a Farm to Table restaurant and the farm that their ads are about. Troy Johnson shares a story about a farmer that found out that there was a restaurant that wasn’t buying from his farm and claiming that they were preparing produce that he doesn’t even grow but was using his name. He writes, ‘Trey showed me a menu from another restaurant, and it had ‘Crows Pass cauliflower soup’ on it,’ says Barnes. ‘I went straight to the restaurant. A sous chef saw me walk in and he went out the other door. The chef was a little embarrassed. He got caught red-handed. I told him, ‘I’d love to sell you produce, but don’t use my name.’'(Troy Johnson, June 24, 2015, pg, 192). Luckfully in this case the pros outweigh the cons. 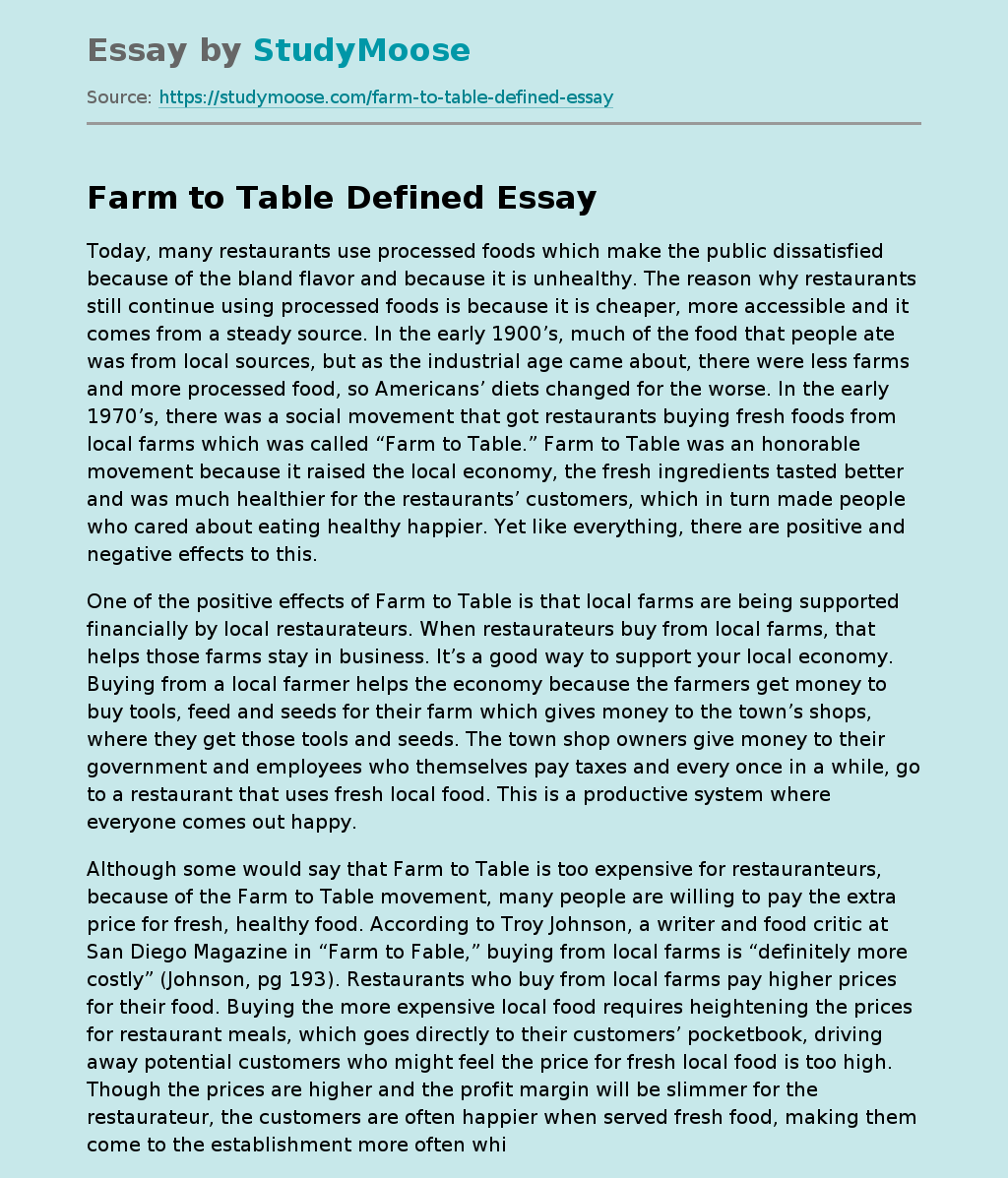