How does Pygmalion highlight the importance of accent, manners and words in 1912?

The Early 20th century was similar to the late 19th. Society was class based and reputation was the most prized possession of any upper or middle class citizen. Reputation was earned through class and politeness of manner, impressing and gaining the favour of those of your class and others. George Bernard Shaw, the author, would have known much about this system, as he was part of the Fabians Society, which was established to attempt equality between classes in England.

Pygmalion is based on the importance of accent, manners and words, as Professor Higgins’ aim is to pass Eliza off as a duchess.

Don't use plagiarized sources. Get your custom essay on
“ How does Pygmalion highlight the importance of accent, manners and words in 1912? ”
Get custom paper
NEW! smart matching with writer

As Higgins says in act I “What is life but a series of inspired follies? The difficulty is to find them to do. I shall make a duchess of this draggletailed guttersnipe”. A duchess was one of the most elegant and regal positions in nobility. They had perfect manners, impeccable accents and styles of life that were greatly reputed to be the most glamorous in all of London, and could never thought to be imitated by a mere commoner.

The first instance that exemplifies the importance of accent and manners is in Act I. Higgins says “You see this creature with her kerbstone English: The English that will keep her in the gutter till the end of her days”. In this excerpt, Higgins basically explains how important accent and manner is. He starts by calling her a “creature”. This metaphor is well placed as a description of her monstrous appearance and manner.

He then talks about her “kerbstone English”, which implies that it is only fit for those who live on the streets.

Then explaining that her “English will keep her in the gutter”. As this comes from an accents specialist, it is valid proof that accent and manners were extremely important in the lives of people in early 20th Century England. Another good example of the importance of Accent and reputation is Mrs. Pearce. Being a middle class citizen, she looks up to upper class gentlemen such as professor Higgins. “What do you think a gentleman like Mr. Higgins cares what you came in? This shows that the typical upper class person in early 20th century London is thought to be someone with much more important things to do than be bothered with trivial details from those of a lower class, and that it was common for lower class people to assume this.

Mrs. Pearce later says, “How can you be such a foolish, ignorant girl as to think that you could afford to pay Mr. Higgins”. This is another assumption, and Shaw has made sure to make it sound condescending towards Eliza, outlining the class difference, even though the two are not that different.

This assumption implies that anyone with Eliza’s accent and manner couldn’t possibly have enough money to pay for lessons from Mr. Higgins. Manners did not always apply to certain scenarios, for example, if an upper class person was talking to a lower class person, they may be condescending and rude, though it may seem wrong, that may have been the way it happened in early 20th century England. The way that Higgins speaks to Eliza exemplifies this point. She’s no use, I’ve got all the records I want of Lisson Grove lingo and I’m not going to waste another cylinder on it. Be off with you: I don’t want you”.

This shows that his upper class snobbery means he doesn’t care about what she has to say and thinks of her as an object. The life of the upper class could be tedious and unchallenging at times, so it is not surprising that his interest in Eliza changes. “Yes: in six months-in three if she has a good ear and a quick tongue –I’ll take her anywhere and pass her off as anything! “.

With this he is beginning to treat Eliza like an animal, using her for entertainment and to boost his own ego and, in time, his reputation; but this also showing how important manners, words and an accent can be, it implies as long as she has those, she can be accepted by any class. Higgins way of speaking to people seems to incur resentment towards him. “Oh you’ve no heart in you: you don’t care for nothing but yourself”. Some upper class people however were polite to those of lower classes. A good example of such a person is Colonel Pickering. Pickering uses a charming polite manner towards everyone he meets. Also learn how to behave in class

As a response to being bothered by a low, putrid flower girl, asking him to buy a flower in Act I, he simply replies “I’m sorry I haven’t any change”, as opposed to being irate and impatient like Higgins. In Act II, regardless of class he is very courteous toward Eliza. There are cases in the book where he would rise or straightened himself when a woman entered the room. “The flower girl enters, and Pickering is touched having already straightened himself in the presence of Mrs. Pearce”, this indicates that he knows the importance of etiquette towards women, no matter what the class. Won’t you sit down? “.

Asking someone to sit down was a sign of friendliness and politeness, which was very important for formal or informal visits, and especially towards women. Due to the substantial amount of respect and politeness that Pickering offers others, he is usually met with willing cooperation, “Don’t mind if I do”. This proves that politeness of manner was an important factor of life in the early 20th century. On further speculation of these points in the play, I have seen that Colonel Pickering’s way was the more upper class attitude.

In act III, Higgins come into contact with the “Eynsford Hill family”, another example of upper-middle class; and his manner seems to still be quite rude. He is greeted by Mrs. Eynsford Hill and this is his reply: “I’ve seen you somewhere before, I haven’t the ghost of a notion where; but I’ve heard your voice. [Drearily] It doesn’t matter, you’d better sit down”. Towards someone of your own class, this would have been very rude. Not only does he not return her greeting, but also he treats her like an unimportant object that he may be familiar with but has no use for.

He then uses proper manners, but in a lazy apathetic way, as if he did not care whether they took notice or not. I see the way Higgins looks at life and people as an analytic, scientific view. Interested, if he might learn or gain something; completely bored, uncaring or blatantly dismissive to anything that doesn’t take his interest. In this same act Pickering acts like the typical gentleman. Pickering shows politeness as soon as he enters the room. “How do you do Mrs. Higgins? “. With this he is already showing more class and manners than Higgins as he greets the host immediately.

In conclusion, I believe that in 1912, manners, words and accent were some of the most important contributories to reputation and how others acted towards you. In act V Eliza explains the importance of manners perfectly as she speaks to Colonel Pickering. “It was from you that I learnt really nice manners; and that is what makes one a lady, isn’t it? You see it was so very difficult for me with the example of Professor Higgins always before me. I should never have known that ladies and gentlemen didn’t behave like that if you hadn’t been there”.

This proves that the way Higgins acted was no reflection of upper class behaviour, being rude and unpleasant, which only turned situations against him. Colonel Pickering’s actions were polite and well intentioned, and therefore he was respected. This outlines the importance of Manners. After this she outlines the importance of words. Again, She is speaking to Pickering “You calling me Miss Doolittle was the beginning of self respect for me”. This also shows manners, but it mainly points out that a small thing like “Miss Doolittle” could make a large difference to the way others thought of you.

How does Pygmalion highlight the importance of accent, manners and words in 1912?. (2020, Jun 02). Retrieved from http://studymoose.com/pygmalion-highlight-importance-accent-manners-words-1912-new-essay 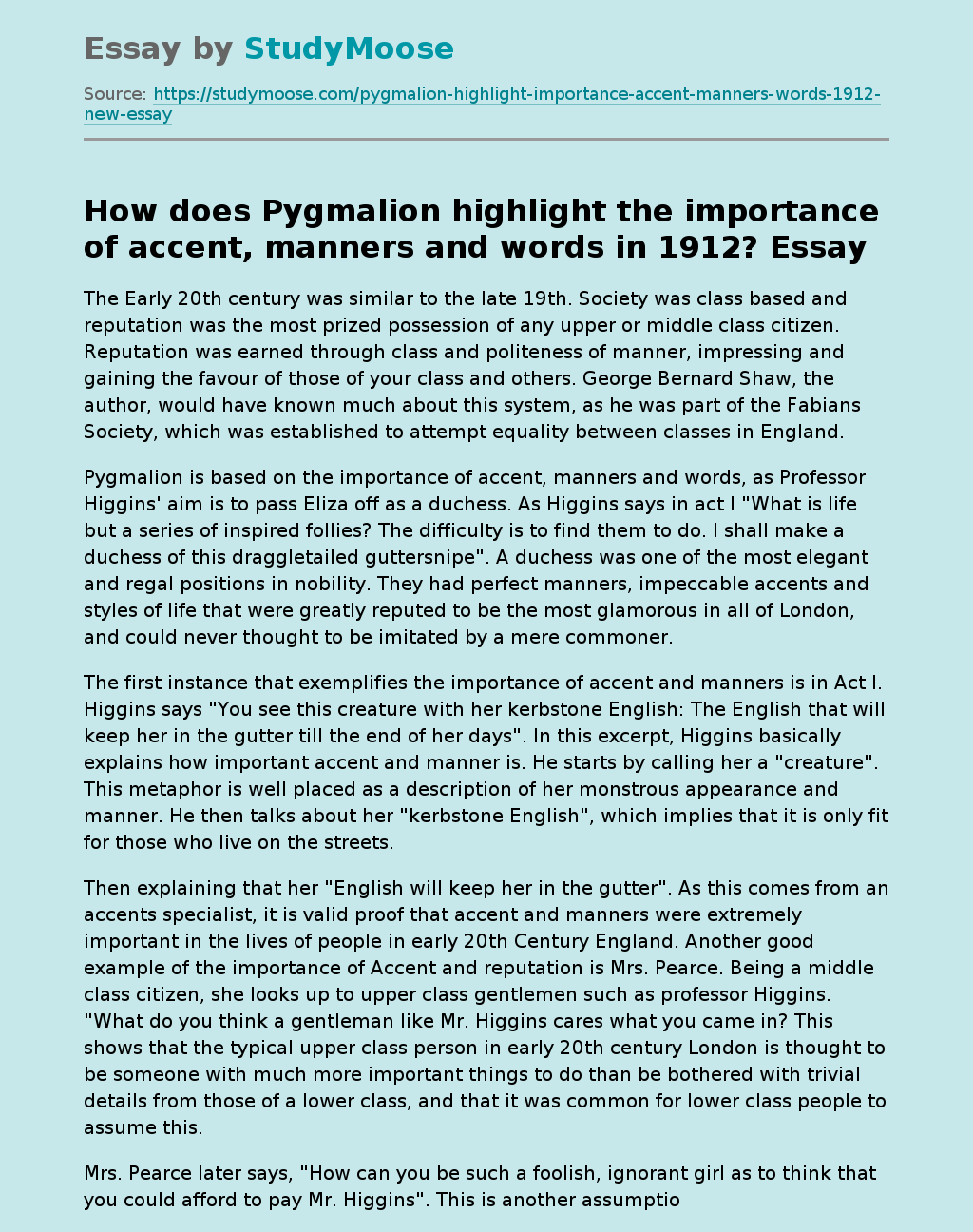