What we call a “Chicago accent” is actually called the Inland North American dialect. This encompasses the major cities around the Great Lakes. The dialect used to be considered the standard American accent until the region experienced a vowel shift, now called the North Cities Vowel Shift. Who Speaks the Chicago Dialect?

Or rather, who doesn’t? The answer, of course, is African Americans in the Chicago region, who have their own (and infinitely more interesting) dialect. Though this may be obvious.

Don't use plagiarized sources. Get your custom essay on
“ Chicago Dialect of English Language ”
Get custom paper
NEW! smart matching with writer

African Americans are the largest population group in Chicago, and it would be irresponsible to overlook the fact that the Chicago dialect is not used by the largest sector of the city’s population.

The most salient feature of the Chicago dialect is that it is undergoing the Northern Cities Vowel Shift. This is most noticeable in words with the /ae/ vowel, which gets “raised” so that it’s close to /e/. Thus, ‘bad’ sounds a bit like ‘bed,’ or, ‘beead.

’ Another notable aspect of this vowel shift is that /o/ is “fronted” so that it is closer to /ah/. So hot sounds a lttle like ‘hat.’ As an ongoing change, it is more prevalent and more pronounced among young people, middle-class people, and females, but it is quite widespread. nearly all white Chicagoans exhibit this vowel shift, at least to some extent. A more local vowel development is a monophthongization of /ow/ to /oh/, so that ‘south’ becomes ‘soth’ and ‘down’ becomes ‘don.’ This is more conservative and less widespread.

Also we can notice that when a vowel sound moves into another vowel’s territory, the result may be a merger —as when the sound of caught comes to be pronounced with the tongue in the same region of the mouth as for cot. In a different pattern, the movement of one vowel spurs a reactive movement in a neighboring vowel. As with strangers in an elevator, one vowel shifts to keep its distance when another enters the space. These coordinated movements are heard in the Northern Cities Shift, which affects six different vowels, those appearing in caught, cot, cat, bit, bet and but. In this change, caught takes on a vowel similar to that originally used for cot. The cot vowel also shifts, becoming more like the vowel of cat.

The vowel of cat takes a position closer to that ordinarily heard with bit and sometimes sounds like the “ea” in idea. Words like bit are pronounced with a vowel nearer to bet or even but whereas bet words have a vowel similar to that in cat or but, and the vowel but words comes to sound more like that of caught. When these changes are plotted according to the positioning of the tongue, the connections among them are clear and the shift resembles a clockwise rotation of the vowels in the mouth. The Northern Cities Shift: These guide words are positioned to represent where in the mouth the tongue is placed for those vowel sounds. The arrows indicate the directions of change affecting the sounds.

The stereotype about Chicagoans is that they say “dis” instead of “this,” but that’s not entirely accurate. The real pronunciation is somewhere in between. To approximate it, first pronounce /th/ the standard way, with the tip of your tongue between your teeth. Then, keeping your teeth apart, move the tip of your tongue to the back of your teeth. That’s the typical Chicago /th/. Contrast it with /d/, which is made with the teeth closed, and the tongue against the roof of the mouth. This is a conservative trait, and is more common among older people, working class people, and males. The unvoiced equivalent, that is, the /th/ of in the word ‘thick’ is even more conservative.

Chicago vocabulary is fairly unremarkable. As a cosmopolitan place, the vocabulary is more generalized than in rural areas, so that Chicagoans are at least familiar with words that were formerly used by dialectologists as markers of Southern dialect or “Midland” – that is, the dialect in between Northern and Southern. Nevertheless, there are a few localisms which are worth mentioning:

What other people call rubbernecking, Chicagoans call “gaping” – thus an accident on the side of the road can cause a “gapers’ delay” or “gapers’ block.” Also, Chicagoans are more likely to use the term “gym shoes.”

In Chicago, like in other American cities that had lots of German-speaking immigrants, “with” can be used more frequently as a verbal complement. Thus, while most Americans might say “come with,” Chicagoans can also say “take with” and “have with.” Consider the following bit of dialogue from Chicagoan David Mamet’s play “American Buffalo,”: 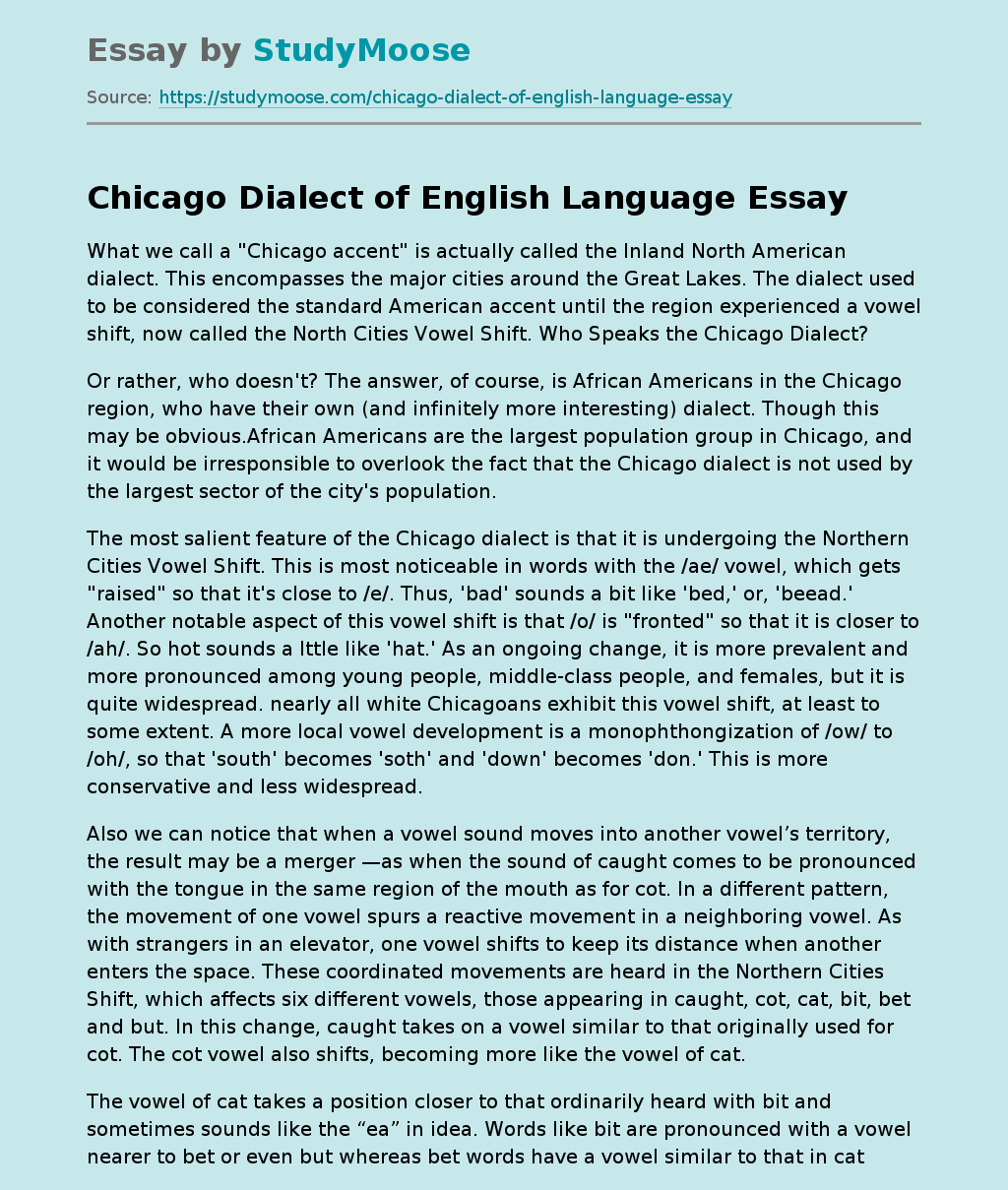