In Claude McKay’s, “Old England” and “Quashie to Buccra” McKay uses dialect as a way to give poems multiple meanings. What may be seen as a simplistic or naive poem about Jamaican life may actually be full of double meanings that only a select audience would be able to identify. In his poem’s, McKay ultimately gives Negros who work under white colonists the underlying message of black resistance by revolution. Perhaps what makes this interpretation so convincing is the background of the author.

Don't use plagiarized sources. Get your custom essay on
“ Analysis of Dialect in Claude Mckay’s Poems ”
Get custom paper
NEW! smart matching with writer

McKay was born Sunny Ville Jamaica as the youngest of 11 sons. While in Jamaica, McKay wrote “Songs of Jamaica”, which is where “Quashie to Buccra” is derived from. In this time, he also became a self proclaimed socialist, “ As a socialist, McKay eventually became an editor at The Liberator, in addition to writing various articles for a number of left-wing publications” (Giles 1). During this period, McKay wrote “If We Must Die”, another poem charged with angst against the oppressed Negro society.

Notably this poem was read aloud by Winston Churchill during World War II, however left unattributed to McKay himself. This can be seen as a reflection on society of the time, and how they weren’t ready to see a poem like that as a black revolutionary poem, and that the issues of the black Negro were quietly swept under the rug or ignored entirely. This is perhaps why the reading of an Englishman would differ so greatly from an African Negro reading “Quashie to Buccra”, as the Englishmen of the time were out of touch with the strife these workers were experiencing.

McKay’s communist background may very well be a bi-product of the cultural discrepancies of the time, and a way for the workingman to get back at the bourgeoisie, or white, upper social class. To address the double meanings of Claude McKay’s work, the reader must first look at the surface layer. As we discussed in class, the poems were done on the condition they were completed in Jamaican dialect, not necessarily because of Claude McKay’s own choice.

To a white, European society reading the poem, it comes across as a poem about a simple agriculturalist that is telling the white plantation owner about the fruits of his labor, and how they may not be fully appreciated. In actuality, the poem can be seen by Negros as a way to criticize the white plantation owner and in fact plant the seeds of rebellion. Indeed, the title of the work itself leads credence to it being veiled in double meaning. While a white, European in the high rungs of the social ladder may read the poem as a simple address of worker to plantation owner.

However, a Negro experiencing the strife of Quashie, the black peasant worker who produces sweet potatoes in the poem, may relate to the unfairness of they experience from the Buccra, which is the white man being addressed in the poem. Indeed, McKay points out in the poem, “You taste the potato, and you say it’s sweet, but you don’t know how hard we work for it” (McKay 2). Buccra even attempts to haggle for a lower price, further showing he doesn’t understand the work that goes into farming the sweet potatoes, “You want a basketful fe quattiewut” (McKay 3).

Not only does this demonstrate the Buccra’s insensitivity to the work that goes into the harvest, but it shows he’s greedy and milking the natives for every last sixpence. A white reader may look at the reading as Quashie simply complaining about his hard work, “The sun is hot like when fire catches a town” (McKay 9). In reality, Quashie would do this work even if he weren’t required to because he has a sense of pride, “Although the shade tree looks tempting, we wouldn’t lie down even if we could” (McKay 10-11).

Someone working these fields could relate to the pride and craftsmanship that takes to plow in a straight line, or work through the rough Earth. This reading can be taken another step further. It’s not common for a fire to simply catch a town, and for a Negro reading the poem, they may see it as a call to rebel and actually set a town ablaze as vengeance against white society. A rebellion such as setting a rich town ablaze would not be unheard of in a communist state, and it might be a call to arms for Jamaican Negros reading the poems in “Songs of Jamaica”.

Undeniably, there appears to be a lexicon for violence in the poem that may be entirely glossed over by a white, European reader. “Although the vine is little, it can bear. It wishes for nothing but a little care. You see potato tearing up the ground, you run. You laughing, you must think it’s fun” (McKay 16-20). As stated earlier, a European audience may feel this is simply Quashie denouncing that his work is difficult, and that he’s just announcing his woes in a silly way, and that the whole thing just merrily amuses the white plantation owner.

However, if you choose to look at this through the perspective of a Negro who is craving to break free of their oppressors, it can have an entirely different reading. Quashie planting seeds can be seen as planting the seeds of an uprising. The imagery of potatoes coming up from the ground seems comical at first, but if you’re an oppressed worker, you might see this as the crops being metaphorical for the workers rising forth to take revenge against the plantation owners.

Even as Quashie explains to Buccra that he’s serious, Buccra seems to completely blow him off as if he’s “making a fun”, or a funny joke, as if the work isn’t taking a serious toll on the Jamaicans. This kind of sentiment can be seen in the final stanza, wherein Claude McKay seemingly dismisses everything he’s talked about earlier, “Yet still the hardships always melt away, whenever it comes around to reaping day” (McKay 25-26). A white, European reader may look at Quashie’s dismissal of all his earlier complaining, as if to say, “Oh well, it may have been back breaking labor, but at least the potatoes are good for eating!

In reality, there may be a darker reading here that a Jamaican potato farmer would be more apt to catch onto. The imagery of “reaping day” seems to also imply that if the Buccra doesn’t start taking him seriously, the Grim Reaper, or in this case, the workers that are being taken advantage of, may make their troubles melt away by simply rising up and doing some reaping of their own that has nothing to do with crops. This does not mean, however, that McKay necessarily wanted a revolution.

It may have been more of a last resort. Indeed, he makes is clear in “Old England” that he has great respect for British culture. “McKay still expressed admiration for the British. He believed that the Jamaicans had acquired their democratic spirit and respect for law and order from the British” (Tillery 14). Indeed, in “Old England”, McKay expresses great desires to visit what he calls his homeland. He refers to Queen Victoria as “Queen Victoria the Good”, and longs to visit the place where poets and kings alike are buried.

Again, however, there appears to be a discrepancy in what different readers may interpret. While it may all appear reverent, he makes it clear that in death, the poets and kings is all alike, and that in their graves, the kings and queens find a place to hang up their crowns. This may symbolize McKay’s gripe with the wealthy class, and how they appear to have a disconnect with the working class Jamaican’s, despite his own love for Britain, and may not deserve a spot next to say the poets that inspired McKay’s writing.

In conclusion, Claude McKay uses dialectical tools to draw different readers to different readings. What one person may see as a happy go lucky poem about a potato farmer may really represent a call to arms. His use of manipulating the dialect to create multiple readings causes the reader to question what exactly his true audience is what he’s trying to tell them through word choice and double meaning. 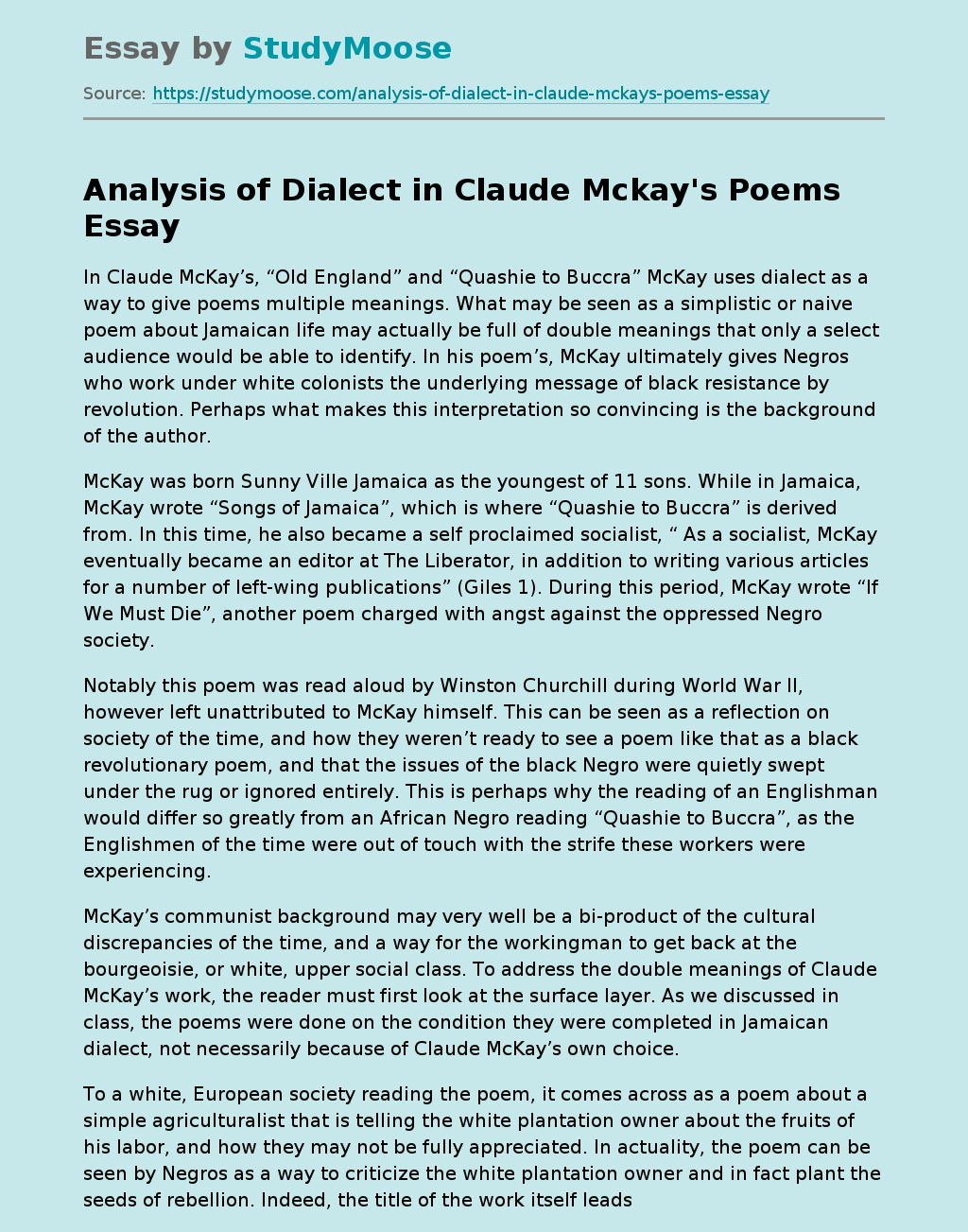