Prelude IV is the last installment of a four part series of poems from legendary poet T.S Eliot. Like most of Eliot’s writing, including the three other installments of the preludes, Prelude IV criticizes the modern world and the state of humanity living in it. The goal of this essay is to interpret the specific criticisms within the poem as well as analyse its structure as well as its semantics.

As previously stated, the core message of the entire Preludes is to criticize modern society and the status quo.

Part IV, as with all poems from all poets, has numerous interpretations of the various elements within the poem. The word ‘soul’ in the first line, “His soul stretched tight across the sky,” can be taken literally as a reference to the ‘soul’ of the city within which the poem is set, or it can refer to, the sun. This particular interpretation is supported by the second and fourth lines, “That fade behind a city block” which depicts the sun setting behind a high rise building “At four or five and six o’clock” which are generally the time of sunset during the winter months.

It is known that the poem takes place in the winter due to the opening line of the first installment of the preludes, “The winter evening settles down.”[1] The fact that the speaker mentions numerous times of day and not merely the time of sunset on that particular day, is to reinforce the idea, that it does not matter what exact time it is, for the same observations can be made on any given day.

The second line, “Or trampled by insistent feet” indicates individuals on their daily commute home, which leads into lines five and six, “And short square fingers stuffing pipes, And evening newspapers, and eyes (…)” which are images used to depict the commuters themselves. These two lines along with the extenuation in the seventh line begin what is to be the main criticism and the ultimate message that the speaker is trying to portrait with this poem: the tunnel vision which has become mankind’s mentality. It is not mere coincidence, as it never is with poetry, that the speaker refers to the sunset at the beginning of the poem. He uses the image of one of the most beautiful natural occurrences and the mundane way in which people go about there daily lives to shown how modern civilization is living in a state of oblivion with “eyes assured of certain certainties” such as the sunset, despite the fact that ‘certainly’ most of the people meandering about in there scripted existences have never taken the time to appreciate something as ‘certain’ as the sunset.

This train of thought and imagery continues into lines eight and nine: “The conscience of a blackened street impatient to consume the world.” The blackened street is referring to the scorch which mankind has left upon the earth with its never ending desire to consume and “assume the world.” The ‘conscience’ represents the general mentality of all people walking the ‘blackened street’ and the fact that regardless of a persons lot in life, all are united in the common goal of ‘assuming the world.’ Line 10 sees a shift in the poem, the speaker is no longer observing what he sees around him, but is now stating his thoughts and feelings towards the images he has observed in the previous lines. For the first time in the poem there is a tint of optimism towards the state of things. “I am moved by fancies that are curled around these images” The speaker states that he ‘clings’ to the “notion of some infinitely gentle infinitely suffering thing.”

This line is the most difficult to interpret in the entire poem, because it nearly impossible to understand what the infinitely gentle and suffering thing is, so it is left to be interpreted by each individual reader. The glimmer of hope can be many things for many people such as enlightment, love or perhaps religion. The latter of which can be supported by the idea of an “infinitely suffering thing” which in this interpretation refers to the suffering of Jesus and that man’s salvation lies in living life by Jesus’ example. The speaker therefore believes that if humankind ‘curls’ itself away from the direction it is heading and follows the path to god, than this civilization wrought with despair and decadence can be saved.

However the thought of hope is but brief, as the speaker finishes the poem with images of a dark and bleak world, which revolves like “ancient women gathering fuel in vacant lot,” and this leaves the reader with a painted reality of a civilization that has lost its sense of meaning and direction that is so desperate that one cannot despair, but mearly “ wipe your hand across your mouth and laugh.” 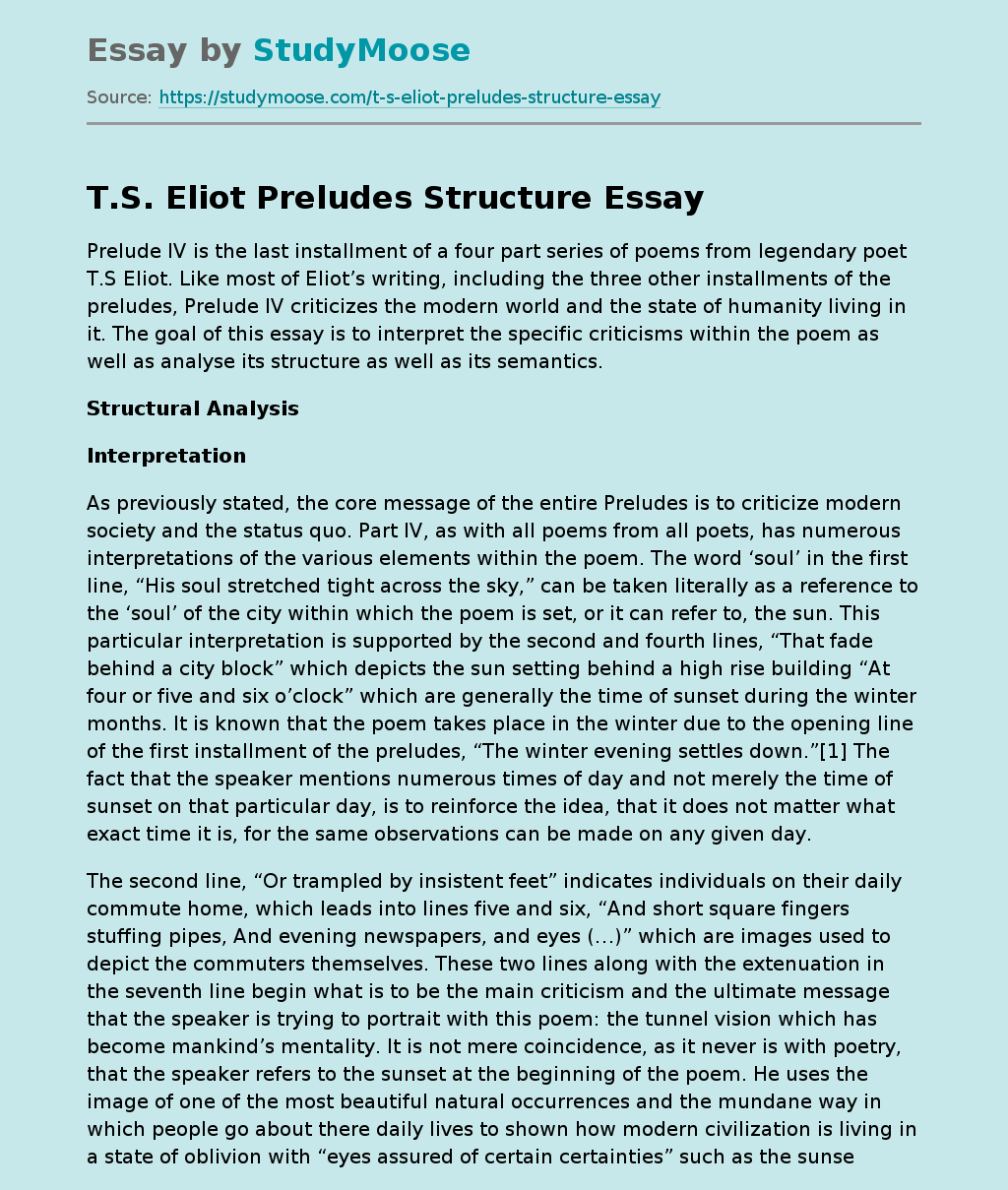