The Love Song of J. Alfred Prufrock (or simply Prufrock) is T. S. Eliot’s most popular poem and it is the one responsible for the launch of his career as one of the 20th century’ leading and influential poet. The poem takes the form of a dramatic monologue and it is considered as one of the most anthologized poem in the 20th century.

Prufrock is a poem which made use of lots of literary devices such as similes, personifications, repetitions, allusions, imageries and the like, all of which contributed a great deal to the tone of the poem which is miserable and unhappy, it also helped contribute to the theme of indecision (which led to lots of missed opportunities), sexuality, and paralysis.

For one the use of simile is clear in the following line, “when the evening is spread out against the sky like a patient etherized upon a table” (Eliot, 1917) and it skillfully illustrates the solemn outdoor setting in contrast to the party setting which would later on take place in the poem.

Repetition is one of the most essential tools used by Eliot in the poem. For one, in the following stanza “In the room women come and go talking of Michaelangelo” (Eliot, 1917), Eliot brings the audience to the place Prufrock himself finds himself tied into, and this particular repetition contributed a lot in setting the tone of the poem as it shows the readers how Prufrock muses on how he wants to tell a woman how he truly feels and yet for some melancholic reason, he cannot.

Upon reading the poem one could envision that Prufrock is not really that old, he is probably a middle-aged man who is trying to examine what went wrong with his life, or trying to look back to the choices he made at the course of his life. Among the things he constantly look upon is the things he did not do, his regrets for acting the way he did, for his indecisions, and most of all he is looking back on his failure with regards to women thus one could then on say that one of the primary tones of the poem is that of a tired, ironic self-criticism.

The character of Prufrock made many references on his going bald, most notably was a scene with a reaper who is holding his coat for him so that he could then on leave this material world. Prufrock tried to make himself feel what it is like to be young again one notable example was when he tried to dress and fashion his hair the way young men does. However, in spite of this particular endeavor he knows deep inside that it is no use since he would no longer be young again and this particular fear of approaching old age contributed a great deal to his paralysis which is the primary theme of this poem.

From the title of the poem alone one could have an idea that Prufrock is no ordinary or traditional love poem. Prufrock then is a ludicrous name and the author wants the subconscious implication of a prude in a frock. The original title of the poem is actually Prufrock Among Women and this particular emasculation added a certain depth to the themes the author would delve into which rotates around the notion of paralysis and heroism. As was mentioned earlier this poem takes the form of a dramatic monologue in which the speaker unconsciously reveals a part of himself to the silent readers. The poem shows a great deal of Prufrock’s inability to commit and express himself to women or to love, or to other individuals for that matter.

The 2st stanza of the poem hints that Profruck and a companion are out for an evening walk. Most of the themes and tone of Profruck illustrates profound melancholy and lack of communication or inability to express himself. The city discussed in the poem appears gloomy, it seems to portray the city in a half dead, desolate, and lonely feel. The streets seems to curve to a particular conclusion or question and it seems to ask if the protagonist should dare to assert himself or to reach out and try to communicate with other people.

The fourth stanza of the poem implies to life’s triviality as could be seen on the following line “hundred indecisions…before the taking of toast and tea”. The readers could then envision Prufrock worrying himself over life’s trivialities such as what tie to wear at the party and what words he should use to strike up a conversation (presumably with a woman) at the party. The women the protagonist is about to meet at the party are belittled in that their primary use is to serve as some kind of a decoration and keep shallow conversation going all throughout the party as could be seen on the following line “that lift and drop a question on your plate” (Eliot, 1917).

In the sixth stanza of the poem one could envision the protagonist hesitating on whether he should continue to climb the stairs which would take him to the place where the party is being held, he keep on worrying on whether he should “dare” communicate or try to reach out to these people. In the seventh stanza the protagonist was pondering about the things he did or the trivialities he did in his life and it also shows that he knows what kinds of people would be present at the party. He knows that those people are full of life’s superficiality. These particular people were further singled out in the 9th stanza as women of women on which the protagonist seems to posit an attitude synonymous to sour-graping.

Upon close observation the readers would then on see that these elegant women have hairy arms, however, in spite of that these women still have some kind of an effect to the protagonist of the poem as could be seen when he was not able to organize his thoughts which is being diverted by the smell of the perfume of these women. It is important in this line to notice that Prufrock does not treat these women as a whole people but rather merely as part of their physicalities which attracts and mislead other people as could be seen on the following lines, “eyes that fix you in a formulated phrase”, “faces that you meet”, voices dying with a dying fall” (Eliot, 1917) and the like.

On stanzas 79-80 the protagonist was once again pondering on whether given lots of empty times should he try to assert his personality and try to reach out to other individuals. Mainly because the protagonist talked a great deal about women on his earlier stanzas one could then assume that the line “force the moment to its crisis” (Eliot, 1917) have an innuendo of sexuality because whereas the inability to communicate himself appears to be the primary theme of the poem, the protagonist incapacity to have sexual relationship is taken care of in a more specific manner. If someone is incapable of having sexual relationship with another individual, he is cut off from the some things considered worth while in life and the protagonist is portrayed as someone who is incapable of making a move on a woman (he could not even reach out to converse to any people, much less a woman) because of his fear to look ludicrous in front of them.

The protagonist inability to make use of the time or opportunities given him is signified by the past tense found in the twelfth stanza. In this stanza the readers would be able to see that if the protagonist indeed tries to reach out to people particularly to the woman he likes he would only appear preposterous and these people would not even be able to understand him. In stanzas 95-97 the protagonist made an implication that he ever approach or make any kind of insinuation to a woman “roll…strength and all..sweetness up into one ball, and tearing…pleasures with rough strife ” (Eliot, 1917) there is a huge chance that he would be misunderstood and worst they would be disgusted with him and put him off.

All of these reasons among many others seem to answer the earlier question on whether he should dare to assert himself. The protagonist states “No!” because he sees himself as insignificant, he is so full of self-consciousness and because of that he is unworthy of “disturb(ing) the universe” (Eliot, 1917).

Now that the fundamental question of him asserting himself has finally been answered the protagonist is once again seen to be looking at what his life would be like (he would grow old and bald) and he would also wonder if he has the guts to eat a peach “do I dare to eat a peach” (Eliot, 1917). This particular line could be viewed in different manners one of which is that fresh fruit because of digestive problems however, the peach could also be seen to have an underlying sexual connotation.

Fruits in general have a sexual connotation as the ripened ovary of a plant and peach in particular holds more sexual connotation because of its flesh like color, its soft texture and its downiness. The peach’s shape and texture symbolizes the female genitalia thus one could see in the line mentioned above that the protagonist is wondering that if he is unable to sexually assert himself to a woman while he was still in the prime of his life, how else would he be able to sexually assert himself when he becomes an old man. Peach also have other meanings. Peach is the Chinese symbol for marriage and immortality, both of which the protagonist so want to have in his life. As could be seen then, the protagonist pondering on whether he would dare eat a peach has got something to do with his sexual ineptness.

As the poem ends, the protagonist was imagining mermaids, oe men’s ideal dream of women sitting on the beach, however, in spite of the fact that it only happened on his imagination, the mermaids still did not sing for him. When the protagonist was awakened from his dream by a human voice one could then conclude that even in dreams, the protagonist is still paralyzed and non-active. This particular paralysis, the protagonist’s inability to act and to grab at the opportunities given to him by life is the primary theme ever present in The Love Song of J. Alfred Prufrock. 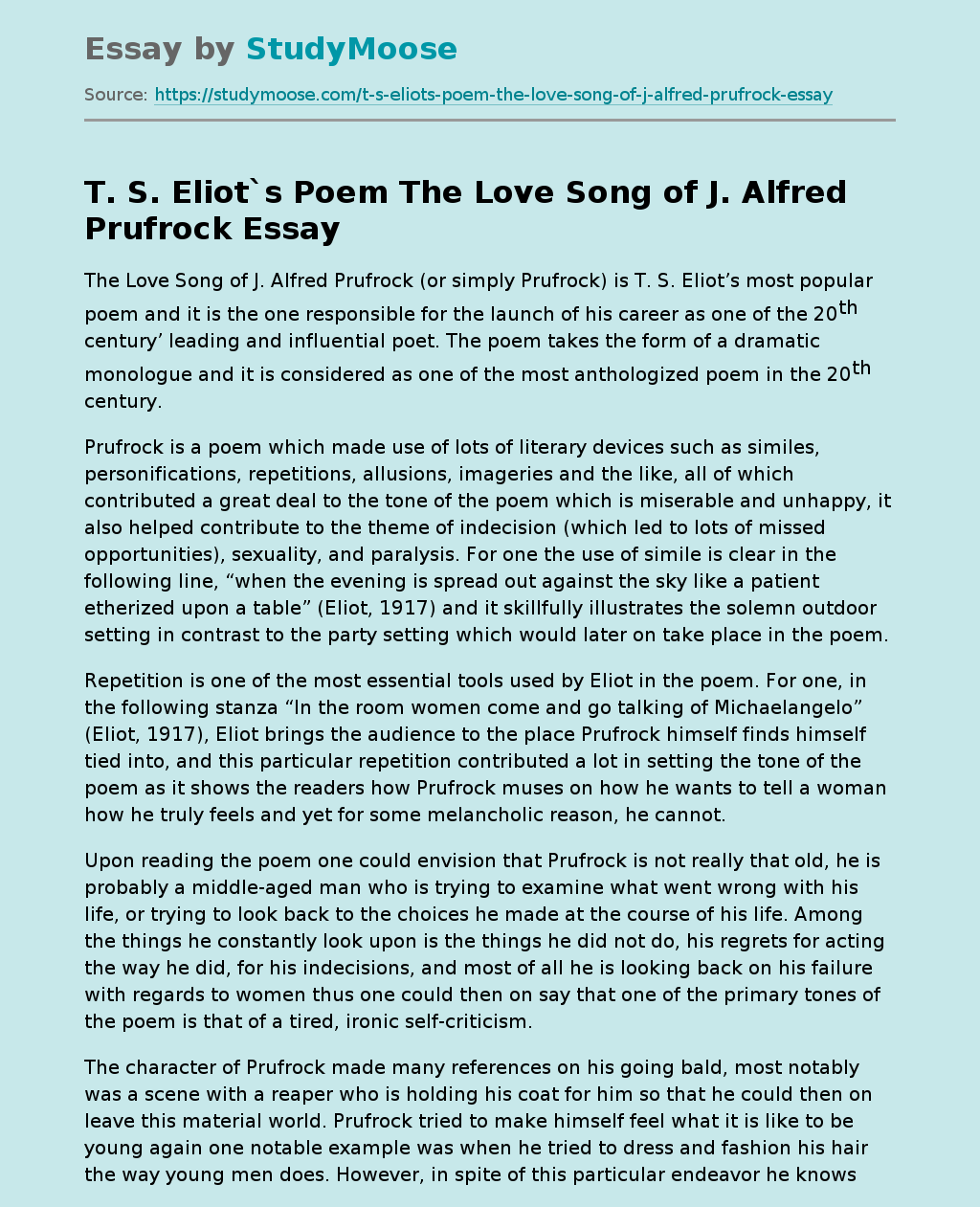