Symbolism in The Great Gatsby

Symbols are always used in novels to help readers understand the story in-depth. In Francis Fitzgerald’s The Great Gatsby, symbols are widely used for Jay Gatsby and George Wilson’s character development. Symbols such as the area where these two characters lived, the eyes of Doctor T.J. Eckleburg, and the cars in this story were all used for this. This novel was filled with symbols and symbolism, which try to convey Fitzgerald’s ideas to the reader. Symbols were constantly used in Fitzgerald’s novel to help develop the characters of George Wilson and Jay Gastby.

Don't use plagiarized sources. Get your custom essay on
“ Symbolism in The Great Gatsby ”
Get custom paper
NEW! smart matching with writer

An important symbol was where Jay Gatsby and George Wilson lived, and how it symbolized their dreams. The people who lived in East Egg were people who had attained the dream, wealth and power, whereas the people living in West Egg were still striving to attain it. Gatsby, a man wealthy enough to live in East Egg chose to buy an estate and live in West Egg.

Gatsby’s dream was not to be able to be wealthy and powerful, but it was to be together with Daisy, “Gatsby bought that house so that Daisy would be just across the bay” (Fitzgerald 76).

This is why he lived in West Egg; he was still striving to achieve his dream. George Wilson, on the other hand, lived in an area between New York and West Egg that was called the “valley of ashes” (26). He was a man who lived in this “desolate area of land” (26), and ran his own garage.

This was very symbolic because he was living in neither East nor West Egg, but in a place where people with lost dreams lived. The valley he lived in represented his lost dreams; he had not attained his dreams nor would ever do so. George Wilson and Jay Gatsby were two men living in two very different places, and these symbols helped develop their character.

The eyes of Doctor T.J Eckleburg were only part of an old advertisement that had been abandoned, but was an important symbol throughout the novel. They were a symbol of a God-like figure that was always watching over the “valley of ashes” (26). The valley in which this advertisement hung was portrayed as a place where people with lost dreams lived. George Wilson had lived in this place for over “eleven years” (37) with his wife, Myrtle. He had never been able to achieve his dream of being rich, and was stuck living in this place. In a conversation with a young man named Michaelis, George refers back to an argument with his wife, “You may fool me, but you can’t fool God!” Standing behind him, Michaelis saw with a shock that he was looking at the eyes of Doctor T.J. Eckleburg (152).

George was overwhelmed by these eyes and they also watched as he changed from a once shy and timid person to a stubborn man. When Daisy and Gatsby ran over Myrtle in their car, “her life violently extinguished, knelt in the road and mingled her thick dark blood with the dust” (131), the eyes of Dr. Eckleburg were also watching. This was symbolic because they watched how Gatsby’s dream was shattered and even how this accident would eventually lead to Gatsby’s death. The eyes of Doctor T.J Eckleburg were an important symbol used to develop the characters of Jay Gatsby and George Wilson.

Throughout the novel, cars were used constantly as symbols to represent character. Gatsby and George both use cars, but the types of cars they associate with are very symbolic. Gatsby’s car, a Rolls Royce, was, “a rich cream color, bright with nickel, swollen here and there in its monstrous length with triumphant hat-boxes and supper-boxes and tool-boxes, and terraced with a labyrinth of windshields that mirrored a dozen suns” (63).

This car was not only beautiful and expensive but it also represents Gatsby’s dream to find and be with Daisy Buchanan. It is also a symbol for all material wealth and the pursuit of such wealth that results in possessions like this car. George on the other hand is a very lifeless man. He can never attain his dream and his car was “the dust-covered wreck of a Ford which crowded in a dim corner” (27). George’s dream was similar to this car; left in the darkness and never thought of again. George no longer had a dream and was a poor and unhappy man. The cars in this novel were very important because they were symbols that represent Gatsby and George’s characters.

In Fitzgerald’s novel, symbols were used frequently to develop the characters of George Wilson and Jay Gatsby. The places where they lived, the eyes of Dr. Eckleburg, and the cars were all used to show this. George’s garage and the billboard across from it, the eyes of Dr. Eckleburg, symbolized his dream to be successful. Gatsby’s estate and his car symbolized his attempt to reach his dream to be with Daisy Buchanan. These symbols were all used to develop their characters and help readers understand this novel in-depth.

Symbolism in The Great Gatsby. (2016, Jul 22). Retrieved from https://studymoose.com/symbolism-in-the-great-gatsby-essay 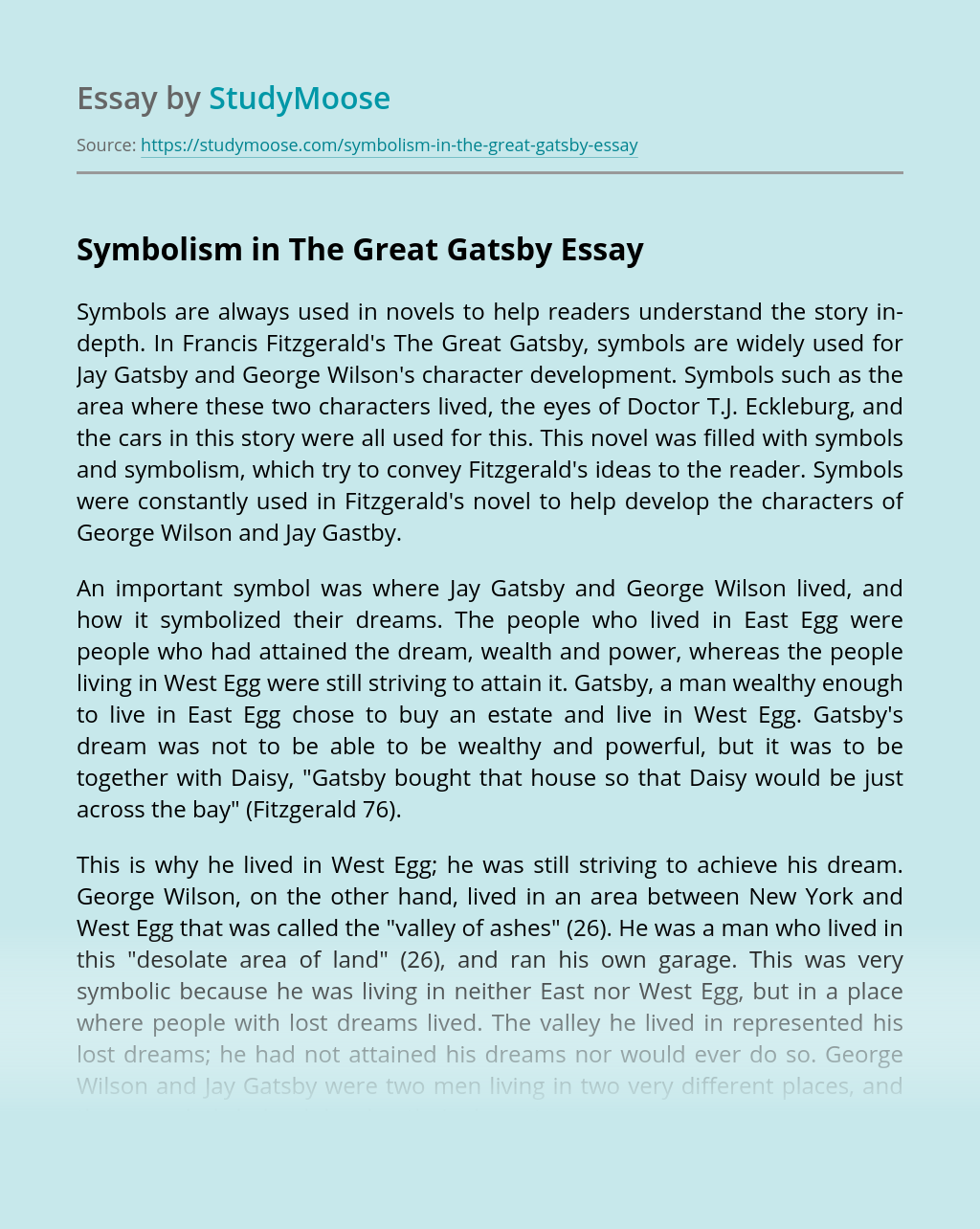