Symbolism in "King of the Bingo Game"

In Ralph Ellison’s short story, “King of the Bingo Game,” he portrays and African American man on the verge of losing everything, playing for his life in a Bingo game, and because he tried so hard to win, lost everything in the end. In terms of symbolism in this story, one symbol definitely stands out: the Bingo wheel. According to the mechanics of the game the unnamed man plays in the story, after you win the first part where you complete a line on a Bingo card, you are given the chance to spin the wheel and win the grand prize if it lands on the 00 mark.

Don't use plagiarized sources. Get your custom essay on
“ Symbolism in “King of the Bingo Game” ”
Get custom paper
NEW! smart matching with writer

The Bingo wheel could be taken to represent more than one thing for the main character. After a superficial reading of the story, one could say that the wheel represents the man’s hopes and fears. If he won the grand prize, he would have money to pay some of his wife’s medical bills.

Although the monetary relief would not be that great, his hopes are pinned on the wheel; he needed that small victory. However, the wheel also represents his fears because just like his life, he does not have full control on where the wheel will go.

This would explain why he is so reluctant to let go of the button, because he is afraid to relinquish control over his destiny. However, upon deeper analysis of the text, one will see that a better interpretation of the symbolism of the wheel is that it represents fate.

The wheel represents the proverbial “wheel of fortune” that forces the fortunes of men to go up and down in an uncontrollable, cyclic manner. When the wheel turns on, the man is stunned by the gravity of holding his fate in his hands.

According to the mechanics of the wheel, because his fortune had been so down, it could only go up; this explains why he won the first part of the game. His exclamation of “this is God: can be explained by a realization that the wheel, like God, controls his fate. He holds on to the button because he is “turning” the wheel of fortune until his fate is on top again. However, in an ironic twist, since he tried so hard to alter the course of fate, and control his own fortune, he lost everything in the end even though he, technically, “won. “

Symbolism in "King of the Bingo Game". (2016, Sep 22). Retrieved from https://studymoose.com/symbolism-in-king-of-the-bingo-game-essay 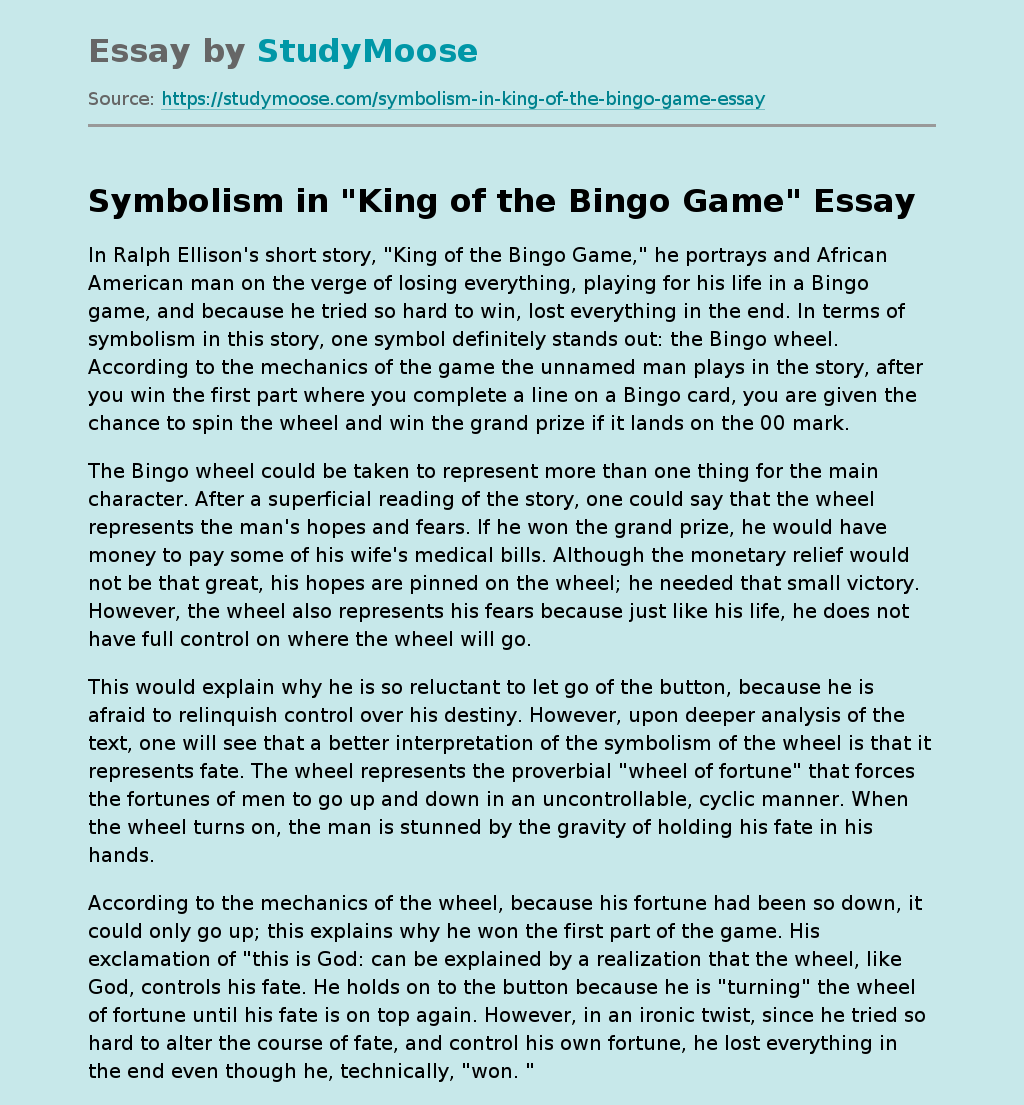