“The Boat” written by Alistair MacLeod tells a story about a father’s life and how he lived as a fisherman. The narrator is an adult man who looks back on his life of when his father was still living because even though he got a university education, he now wants the life his father had. He expresses how his father always wanted him to become something bigger and better then what he became. The author, Alistair MacLeod, used many different writing techniques within this short story.

The father/husband wants a life outside of the fishing world he lives in. He finds ways in his everyday life to add exciting pieces of the outside world to his because he feels the need to learn things outside of the boat as demonstrated by the radio he keep on and listens to daily.

Symbolism is provided through the tourists who his daughters meet through their work; they provide a certain fulfillment of wanting a bigger and broader world. He goes out of his way after a long days work to take these tourist on boat rides. “The tourists with their expensive clothes and cameras and sun glasses awkwardly backed down the iron ladder at the wharf’s side to where my father had waited below, holding the rocking Jenny Lynn in snug against the wharf with one hand on the iron ladder and steadying his descending passengers with the other.

” (Macleod, p. 229) The father/husband got to experience new excitement from the tourist; he could see in their eyes that “awe” effect that the sea gave them even though he did not feel that feeling anymore. He felt appreciation from a different point of view for once, allowing him to sing and be joyful. The new clothes and cameras the tourist brought on his boat showed him different culture that he had never experienced. The main enjoyment of the tourist was the conversations he encountered, to hear what everyone else’s lives were like. The father/husband is inevitable to his craving of what else is beyond the sea in which he spends everyday on. This is one of the main reasons why he allows his daughters to get a job in a near by restaurant. He feels as if they deserve to experience everything he wishes he could have experienced. Even though his inevitability for the outside world is influencing him to push his children to do better, he also has obligations that may set him back from that goal.

A person has certain things in life they have to do in their role; this is referred to as their obligations. “The Boat” delivers many types of obligations for a man as a father and a husband. The wife’s “way of life” is a match to the man’s obligation as a husband because as a couple raising children, a husband and wife need to work together. The wife has a very narrow view of how life should be, as a husband he is obligated to fulfill those views and work together on raising their children to this specific way of life. She believes the best life for her children is to take on the roles of their parents: the son become a fisherman like his father, while the daughters become housewives. As a father, he holds an obligation to provide his family with food on the table, a roof over their heads, and clothes on their backs. He achieves this obligation by being a fisherman everyday, even though this is not what he wants. The wife is obligated to help her husband; she is very wrapped up about the boat by filling her days working in preparation for her husband’s next day on the boat. Even though the husband is obligated to support the wife’s view of life, he disagrees. He believes his children should grow up and get an education to become more then he ever was. The father/husband tries his best to make his life not only to his obligations but also to his wants. “When he came home he threw the money he had earned on the kitchen table as he did with all his earnings but my mother refused to touch it.” (Macleod, p. 230) The father/husband takes tourists out on the boat to satisfy his wants to a broader world, but his wife finds the thought of the money earned from his joy ride distasteful. He starts feeling trapped from every angle, having to live his life in routine everyday without any freedom to his interests of the outside world.

The father/husband has had to live a life of following patterns passed down by many fishermen, his life thought about university and a higher job opportunity was shot down. This story is strongly influenced by the traditional folk culture of Cape Breton. A university degree was never an accomplishment in his culture; his father raised him to be a strong, hard working fisherman. For many reasons such as supporting a family, supporting his economy and having the family business continue, the father/husband had stepped into his father’s shoes thinking it would get better. Over the years of carrying on the family business of fishermen the father/husband has realized he is becoming imprisoned in his own life. He starts finding himself reading books in his spear time, which shows symbolism to his imprisonment. He uses these books to try and educate himself because he never got to go to university and get a high-leveled education. “The bracelets of brass chain which he wore to protect his wrists from chafing seemed abnormally large.” (Macleod, p. 230) A symbolic representation of his life imprisoned by the boat is told from this sentence of the story. He has no other life outside of being a fisherman; the chains on his wrist are like shackles that the boat and the sea have put on his life. He has been “chained” to this boat all his life, his life has revolved around the sea. He wants to make sure that his children have the opportunity to view the world, not to be stuck in a narrow view of life. He knows that the life he is living will cause curiosity to his children if they follow the same footsteps, therefore he strives for them to do bigger and better things in life.

Symbolism of The Boat by Alistar MacLeod. (2016, Feb 22). Retrieved from http://studymoose.com/symbolism-of-the-boat-by-alistar-macleod-essay 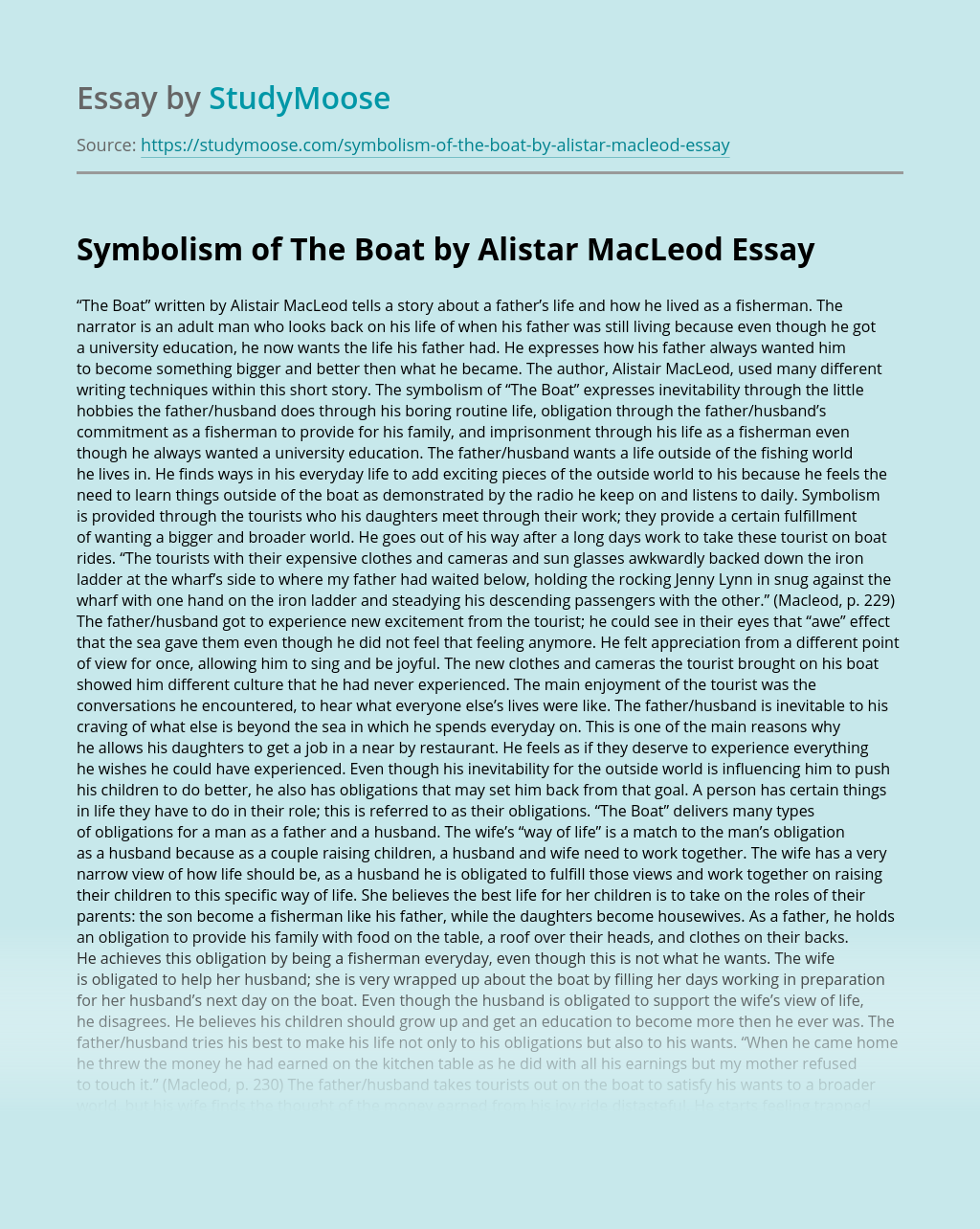 Don’t waste time
Get a verified expert to help you with Symbolism of The Boat by Alistar MacLeod
Hire verified expert
$35.80 for a 2-page paper
Stay Safe, Stay Original