Opportunities
Threats
－ With advancement of digital technology, there is enormous room for commercial development － Huge Potential for Development of Smart-phone market

2. The second strength is in Samsung’s product design that combines Personalized exterior with humanized design. Along with its innovative features, Samsung’s sleek designs have made Samsung mobile devices a popular choice among the masses. Samsung’s tactic of making bigger screens for its smartphone devices, particularly the Galaxy Note series, has been a big part of its success in differentiating the brand from its competitors. The big screams have become trendy and appealing.

3. Samsung’s lead in technology and innovation comprise its third strength

4. Samsung’s fourth strength lies in its strategy to attract the world’s best talent.

Samsung is named as top rising brand by Inter brand and is the 9th most valuable brand with value nearly $33 billion. It has risen by 40% from 2011 to 2012. Samsung has been able to transform its brand image from a “value for money” brand to an innovative leader that “cares for everybody.” Samsung has tried its best to build a contrast between its biggest competitors Apple as a “self-centered brand” versus itself, a brand that cares for everybody. For example, a recent ad for the Samsung Galaxy S3 shows images of married couples and families with kids, in an attempt to attract a broader audience with slogans like “designed for humans, inspired by nature.”

1. The first weakness lies in Samsung’s operating strategy. Samsung does not want to establish business relationships with many suppliers, and this is one of the reasons why Samsung’s development is restricted. Even though Samsung defends this by saying that it is better able to protect its intellectual properties this way, in current time’s environment with fierce competition, companies with more suppliers are more competitive. Thus, Samsung needs to be more flexible in the company’s operating strategies.

2. Another of Samsung’s weaknesses also lies in not targeting low-end consumer market. Samsung focus on product fashion, so the price is relatively high. And Working in the WiBro (Wireless Broadband access service) and DMB (Digital Multimedia Broadcasting) market, but return on investment cycle is long.

3. Samsung’s reliance on the Android operating system (OS) is another weakness. Android phones are extremely customizable and they give you the freedom to experiment to your heart’s desire. One inevitable side effect of this freedom, however, is that sometimes your phone encounters a problem or two. Maybe it won’t boot or maybe it randomly shuts down. Maybe you lost a critical file and now some features won’t work.

Opportunities:
1. The first opportunity is that with advancement of digital technology, there is enormous room for commercial development. a. In the digital age – the age of electronic information – there are two major stars: mobile phones and the Internet b. With the advent of the digital age, consumers desire high quality of mobile phone products c. Chinese communication consumers develops rapidly

2. Samsung also has an opportunity in the smart phone market’s development potential. a. The release of Apple iPhones began the wave of smart-phones b. In the mobile Internet age, every large mobile phone manufacturer and operator has promoted and popularized mid-to-low price range smart-phones. China is leading the arrival of the era of smartphone evaluation.

Threats:
1. The first threat to Samsung is － Apple has become Samsung’s strong competitor at the high-end, popular mobile phone market Apple’s cell phone has a high-end and popular image, and shares high similarity with Samsung. Thus, more than the mid and low-end markets, Samsung experiences a greater impact from Apple’s competition at the high-end market. Considering mobile phone products of different smart-phone price ranges, Apple attracts greater user interest and has more product competitiveness than Samsung, despite the larger numbers of Samsung mobile phones on the market. This is related to Apple’s unprecedented brand appeal and affiliated operator support force.

2. The second threat to Samsung is －In the mid-to-low price range market, there is Nokia a. According to statistics, Nokia had attracted a larger amount of user interest than Samsung at the mid-to-low end mobile phone market, in both the overall and smart-phone market. b. Nokia’s mobile phone market share relies mostly relies on the mid/low-end mobile products. In the past two years, with Nokia’s decline on the mobile phone, particularly high-end smart-phone market. c. The mid/low-end market has become the last sector of the market where Nokia has a lead. Nokia naturally will not ignore this. 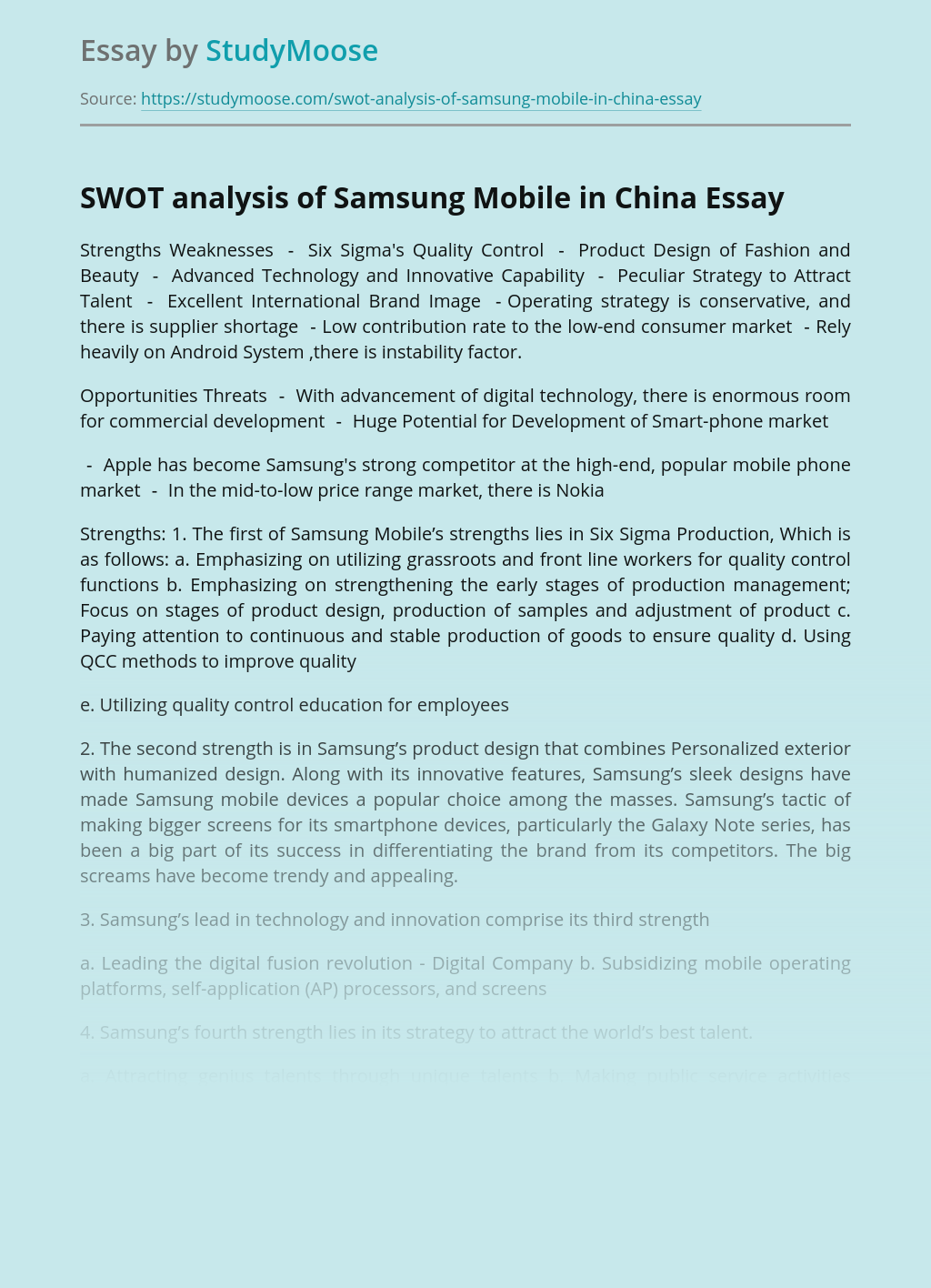 Rate this post Over-reacting is better than non-reacting’- academics from China share their thoughts on COVID-19. The experience in China show us how to dealing with pandemic events, the right things to do is to believe and obey the guidelines that government and health experts provide. There are several measures that we can adopt to...

Get Essay
"The Good Earth": The Oppression of Women

Rate this post “In fact, the birth of female child was considered to be both a time of sadness and a time of an evil omen.”(Lotus 54) A woman is still considered to be a weaker gender in today’s society and the inequality between male and female perpetuates. In fact, this situation is quite prevalent...

Rate this post River like blood in Roxian, Guangxi About one third of the industrial waste water and more than 90 percent of household sewage in China is released into rivers and lakes without being treated. Nearly 80 percent of China’s cities (278 of them) have no sewage treatment facilities and few have plans to...

Rate this post There are significant holidays to every country. Holiday is define as a day free from work that one may spend time to relax, especially a day on which custom or the law dictates a stopping of general business activity to honor or celebrate a particular event. In religious term, it is a...