Don't use plagiarized sources. Get your custom essay on
“ Samsung Swot Analysis and Company’s History ”
Get custom paper
NEW! smart matching with writer

Other notable subsidiaries include Samsung Life Insurance (the world’s 14th-largest life insurance company), Samsung Ever land(operator of Ever land Resort, the oldest theme park in South Korea) and Cheil Worldwide (the world’s 19th-largest advertising agency measured by 2010 revenues). Samsung produces around a fifth of South Korea’s total exports and its revenues are larger than many countries’ GDP; in 2006, it would have been the world’s 35th-largest economy. The company has a powerful influence on South Korea’s economic development, politics, media and culture, and has been a major driving force behind the “Miracle on the Han River”.

* Practice the good leadership theory.
* High market share that continues to grow (Mobile Phones and memory chip)and LCD.
* Design with an attractive styling that interests the customer, as the result of the development of Samsung’s new products that involve team of product designers. What is Samsung’s competitive advantage?

* Technologically driven niche products
* Strong Infrastructure
* High investment for R&D
* Wide range of products
* High brand value
* Higher economic scale and economic scope
* Horizontal and vertical integration (EG. Samsung’s own stores, SRAM for their own mobile phones) Michael Porter’s 5-Force,
* Samsung is a large buyer and can use that towards their advantage
* Higher yield than competitors

* Average prices of products seem to be a low quality products- * Not proactive in introducing a new product Not user friendly * Differences between cultural and language which lead the group into conflicts * Insufficient software or talent engineer to create their own software * Heavily investing into development of newer markets and not focusing on any one of core competencies.

Threats arise when conditions in external environment jeopardize the reliability and profitability of the organization’s business. * Threats are uncontrollable. Examples of threats :-macroeconomic matters-technological change-legislation-price wars-changes in the competitive marketplace. For Samsung, the main threats are :

1. low cost competitors in China
2. legal war between Samsung and its competitors such as Apple.
3. Low-cost competitors Samsung is facing threats from many other low cost companies in China. While Samsung was busy competing with others, Huawei a company which focus on low cost products; is now a leader in fixed-line networks, mobile-telecommunications networks, and budget smart phones. Vizio, LCD TV supplier that overtook the premium brands in five years to become the North American market leader in large-format TVs.

Emulation mobile phone-In 2010 the numbers of emulation mobile phones imported from China to India has reached 38 million-these low-cost competitors rise more quickly than premium players anticipate-these low cost competitors may face the risk of being sued for violation of valuable intellectual property rights In 2012, Apple temporarily managed to stop the sale of the Samsung Galaxy Tab 10.1 in all of Europe, and now Apple is going after the whole Samsung Galaxy production line. Since 2011, Apple has filed a lawsuit against Samsung, Apple claims that Samsung infringes patents in terms of how it’s Galaxy products operate Can Samsung survive? To survive in the market:

1. Time 2. Resources Apple and Samsung are involved in ongoing copyright disputes in 10 countries, as competition in the smart phone and tablet sectors grows ever more intense. If the injunction of Samsung smart phone could not be lifted, it may create a certain impact on Samsungs earnings.

Best used by Samsung’s managers as a way of clarify the thought processes that goes into a business decision. The entire SWOT analysis can, and should, make the managers think more deeply and systematically into the business evaluation process. A careful and thoughtful analysis should bring into the balance of Samsung’s advantages and vulnerabilities Recommendation should review and check their marketing strategy, should use just-in-time (JIT) inventory management. 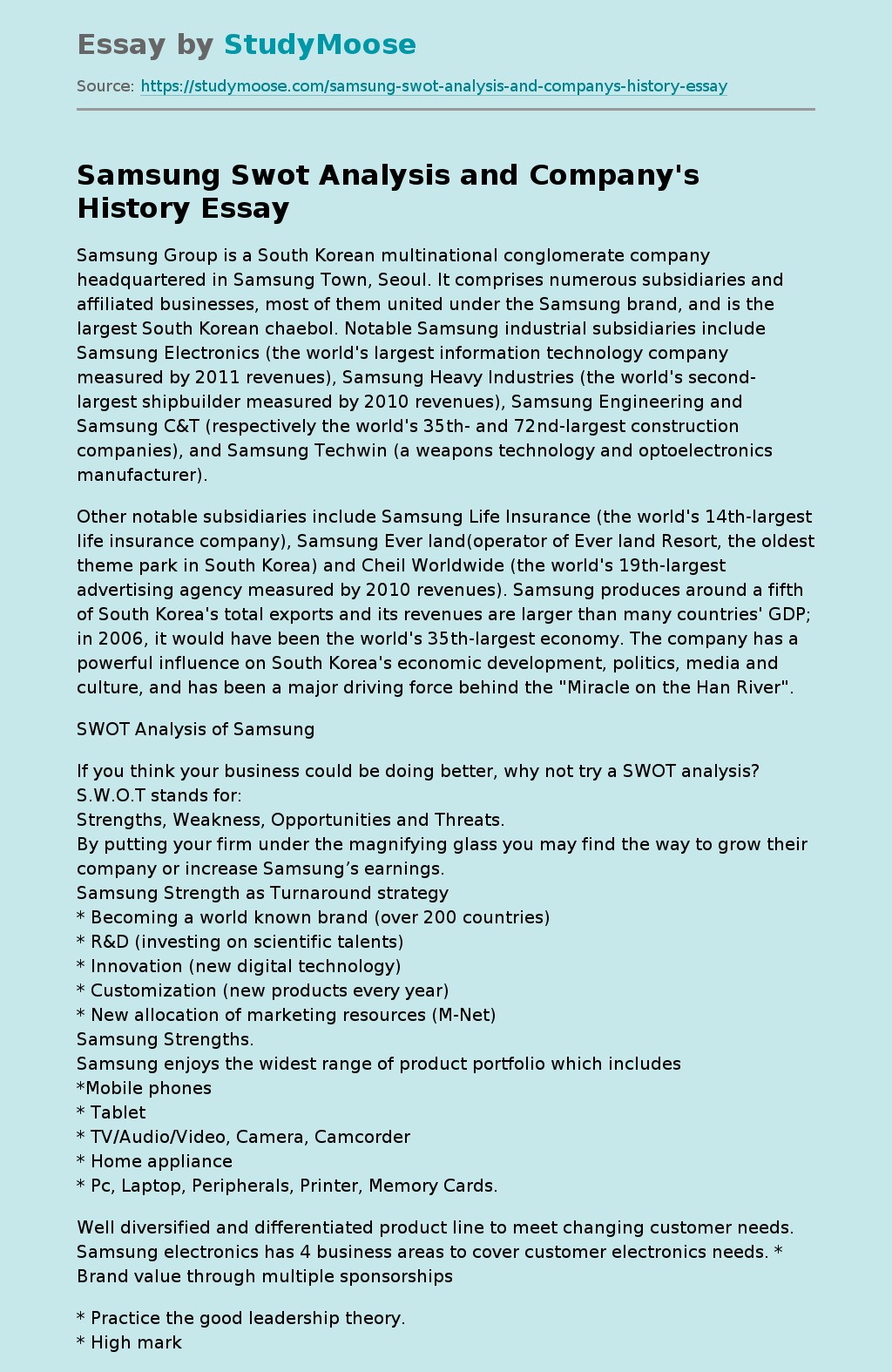