5. 1. Summarise the expected stages of children’s behaviour. Children need guidance and personal example from the adults around them to help them learn what is acceptable and what behaviour isn’t acceptable. Behaviour is greatly influenced by primary socialisation and children will react and take in how close family members act. Bandura developed the modelling idea where children would copy the adults around them. “There is much evidence that a child who witnesses or experiences violence at home may develop aggressive tendencies.

Don't use plagiarized sources. Get your custom essay on
“ Summerise the Expected Stages of Childrens Behaviour ”
Get custom paper
NEW! smart matching with writer

There are a number of different types of behaviour these include assertive, aggressive, submissive and manipulative behaviour. When a child is showing signs of manipulative behaviour they tend to blame others for their actions rather than taking responsibility. Children who act in this way may have underlying issues affecting them, they could be lacking in self confidence and have a low self esteem, this may also come across in the child as being withdrawn or down in themselves and possibly in others.

If a child has self esteem issues then there may be a problem in the child’s life that affects this. Self esteem and self worth are all about liking who we are. Children need to feel like they belong. This applies both at home and to social situations. If a child is not accepted or feels that they are not accepted then it can have a negative impact on both their emotional security and on their behaviour. ” Submissive behaviour is similar to manipulative in regards to self relief and self worth.

They are likely to just agree with everybody else and never input there opinions or values as they feel others are better than they are.

When a child shows signs of aggressive behaviour it could be bravado a false perception of the child and the only way the child feels they can cope is by acting defensive and by having an aggressive attitude. “The development of aggression was seen by Bandura as being a result of social learning. His experiment with children watching a film of adults hitting dolls was fascinating as the children copied it and saw that as acceptable behaviour. ” There is also another theory about aggression and this is the biological theory. This states that humans need their own space or territory and that if that space is threatened they will react with aggression. Frustration is also seen to produce aggression, observe a small child who cannot do something he or she wants to – the result may be a tantrum or an outbreak of aggression. ” The act of aggression can also be started in a child through boredom, the activity or game may not be challenging enough and this may cause the child to act this way to seek attention. “A theory known as the frustration-aggression hypothesis combines the instinctive nature of aggressive with learning theory.

It was put forward by Dollard et al in 1939, although was later revised. The basis is that, although there is an inborn aggressive instinct, it tends to be triggered when people are feeling frustrated. This linking of frustration with aggression may explain why some children have dolls or objects onto which they heap their anger. ” 5. 2. Analyse strategies to encourage appropriate behaviour. There are many ways to encourage appropriate behaviour. Children learn from the adults around them they watch, copy and take in each action and how adults respond to situations.

Ways to encourage a child to behave properly can be by giving rewards and praise for being good. Forms of rewards can be from sweets to toys or even helping out in future activities. Giving sweets isn’t as rewarding as it may seem as this affects children’s behaviour as many children become hyperactive and also they may expect this reward every time but if these are given the behaviour may change for the worse. A better reward would be fruit and a sticker showing the child that they have been good and that they could receive these each time.

Empowerment is also an effective strategy to encourage a child’s behaviour, children need to be encouraged from an early age to help them deal with issues they may face, but adults also need to support and protect the child. If a child has a feeling of control in them and their lives then there confidence and self esteem will be lifted and this will help their behaviour. If a child is given the chance to make their own decisions they will feel important and in charge helping how they act. Play should empower children, affirm and support their right to make choices, discover their own solutions, to play and develop at their own pace and in their own way. ” Children can behave badly due to many different reasons; one most common cause of bad behaviour is separation and changes in a child’s normal routine as joining a nursery is usually the first time a child is separated from its parents. Parents are usually able to stay with their child for a little while to help settle the child in.

The key worker system is useful as this will help the child feel safe and secure with that person. “It is often helpful if the same member of staff welcomes the child each day, particularly in their first few weeks of attendance. This helps build security and gives both the child and their parent a focal point where they can say goodbye with limited distress. ” Another strategy for managing behaviour is the ABC strategy, which is based on social learning theory. When a child finds it difficult coping with new challenges and becomes distressed its best to deal with this with consistent responses.

Showing a child attention whilst behaving positively helps them as they will stop associating gaining attention with behaving badly. This is positive reinforcement and needs to be done regularly as if a child’s behaviour is challenged occasionally then “this can be described as negative reinforcement, as the actions of the adult do not give a consistent message to the child that the behaviour is unwanted. The result is likely to be a more frequent display of the unwanted behaviour. ” 5. 3. Summarise procedures to inform and document inappropriate behaviour.

When children behave differently to other children and act aggressively and non cooperative its best to talk to the child’s parents and to work together as this is vital. From parents you can find out how the child acts at home and the response that the child gives to his parents when punished. If a child behaves so badly that both parents and carer can’t manage the situation then professional advice may be needed to establish if there are underlying issues that are affecting the child and the behaviour could be the only way that feelings and emotions can come out.

When dealing with a misbehaving child its best not to shout at the child but to just speak with a strong raised voice to show the behaviour is wrong. Any form of inappropriate behaviour is important to be documented and also the forms of discipline, such as time outs, should be reported to parents verbally and also in writing. Behaviour policies are a good way to make sure everyone works to the same guidelines and can help staff to refer back and decide what actions to take.

Policies are also useful as it would be made available to each parent from the start of childcare so they are aware of what boundaries the staff goes by and that are in place. “A clear behaviour policy may help a team to develop and maintain a positive approach to children and such a policy is part of communication in partnership with parents. ” 5. 4. Analyse the implications where behaviour can be attributed to specific special needs. Behaviour can show other problems in children. These problems may be ncontrollable for the child as parents or carers may not have noticed that the child has further problems. Some children are unable to concentrate and work well with others and their behaviour can show this difficulty. Children who show continuous signs of behaviour problems may have a condition that causes the child to be unable to concentrate and learn. These conditions are ADD and ADHD. “Children with Attention Deficit Disorder (ADD) find it hard to focus on an activity and see it through, even a game they choose and enjoy.

They are easily distracted but, because the children may simply go quiet or wander off, they can be missed in a busy nursery. ” This condition could show how a child behaves differently and struggles to communicate with people and other children. “You will not miss those children who have Attention Deficit with Hyperactivity Disorder (ADHD). They not only move continuously from one activity to another, they also demand adult attention with loud behaviour and may disrupt other children’s games. There non-stop activity can also stretch into the night and their parents are exhausted. When children show either of these signs of difficulties parents and even carers may need extra help from professionals who deal with these situations daily and can give help and advice on how to control the child or work with the child to keep behaviour reduced. There are also other signs of behavioural problems that can be related to special needs. “Children with an autistic spectrum disorder can appear inattentive and behave like a much younger child in that they are highly focused on a narrow range of interests and very hard to redirect. Other experiences affect a child’s behaviour. Divorce can potentially affect a child’s behaviour it all depends on the adults around them and their ability to explain, or not explain the situation and the child will also recognise how their life has changed when the divorce is finalised and when one of the child’s parents no longer lives in the same home. The child in this situation mainly needs reassurance that their life won’t be affected too much and that they will still be safe and in a stable environment.

Due to a situation like divorce it can influence the way a child behaves as they may feel frustrated with what is happening and this may be seen through unwanted behaviour. “Early experiences affect children in ways that can be seen through their development but also in the way they behave. Sometimes you will find that persistent worries or fears weigh on a child and do not lift despite sympathetic communication. ” Domestic violence can affect a child’s behaviour greatly even if they are not receiving the abuse. If a child experiences domestic abuse then they become more likely to respond to situations with aggression. 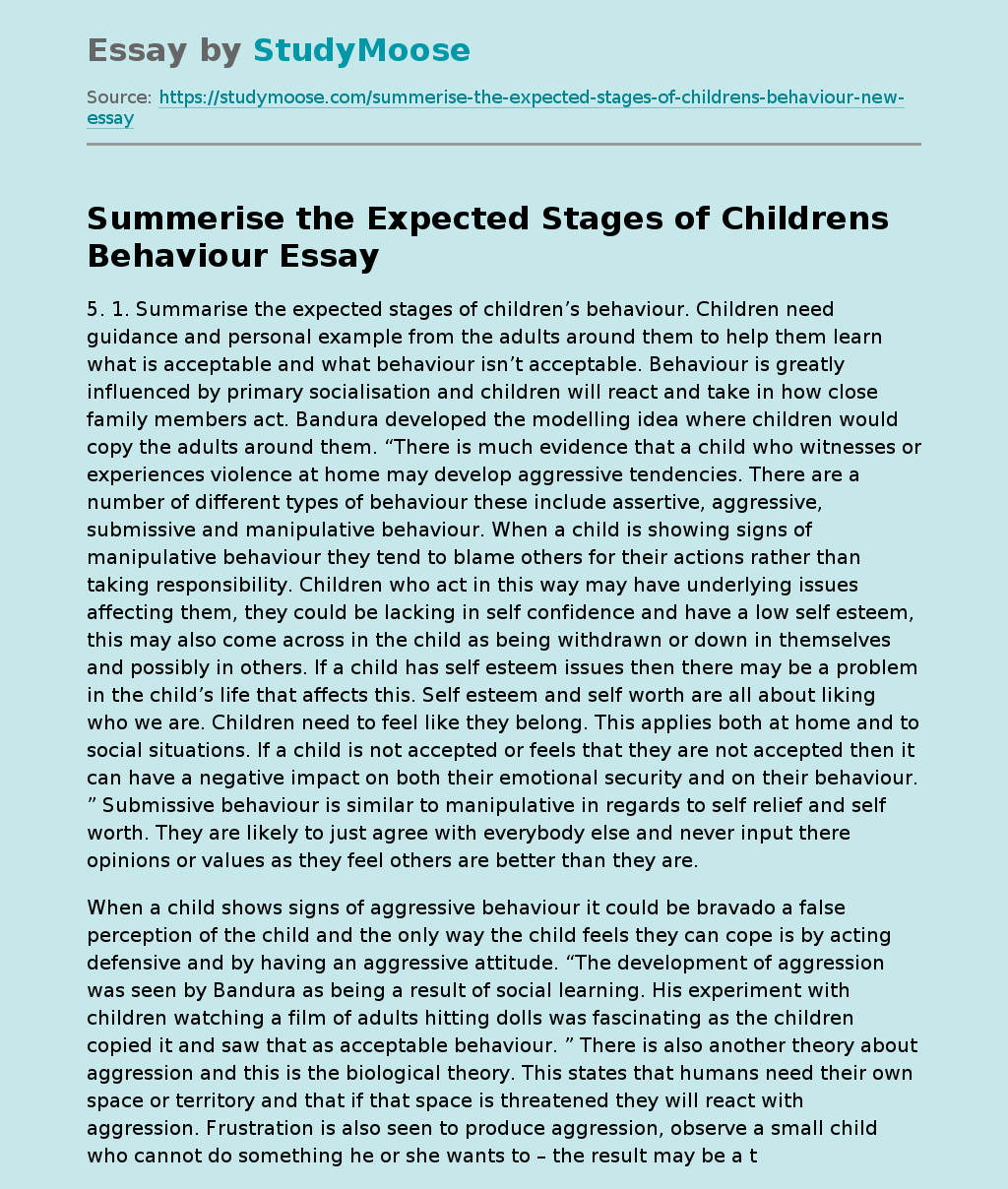