Parents hold a lot of responsibility when raising children. They are there to teach them right from wrong and how to behave in order to raise them into successful men and women that today’s society can relate to; rather than juvenile delinquents that this world discriminates upon. It is the parent’s responsibility to instill values into their young children because as the children grow it becomes their responsibility to make their own decisions since one day they will have to face the real world on their own.

Don't use plagiarized sources. Get your custom essay on
“ Parents held responsible for childrens crime ”
Get custom paper
NEW! smart matching with writer

However, parents shouldn’t be incarcerated for their children’s wrong doings, the child themselves are responsible for the crimes they committed. They deserve to pay the price for the actions they take.

If children did the crime then the most reasonable explanation would be that they pay the price. Blaming parents isn’t going to help the children learn from their mistakes, it’s just going to make it that much easier for them to commit the crime again without getting any punishment sent their way.

That doesn’t mean that the parents should be punished for the child’s mistakes. Parents instill rules upon their children and have high expectations for them. However, many children in today’s society are easily influenced by people in their surroundings. So, by attacking the parents the problem isn’t going to change and the situation isn’t going to get any easier. The vicious dog analogy that states, “Parents should control a child just as an owner should control a dog” is not a reasonable statement. I fully agree with the author Sylvia Miller. Children are not animals nor should they be treated like animals.

They don’t deserve to be controlled like a pet. By controlling a child and keeping them enclosed like a pet, is only going to make matters worse and the child is going to rebel. A parent has to lay down supervision and care for their children, but aren’t responsible for every action the child makes. If we continue to blame parents for their children’s crimes, then we will see no positive outcomes in the child’s future. Parents can’t control their children only influence them.

If a parent continues to try to participate in a child’s life and that child continues to rebel. It is therefore not the parents fault of the crime that child commits. It is up to the children to follow the rules that their parents established for them in order to live a successful life.

Parents held responsible for childrens crime. (2016, May 24). Retrieved from https://studymoose.com/parents-held-responsible-for-childrens-crime-essay 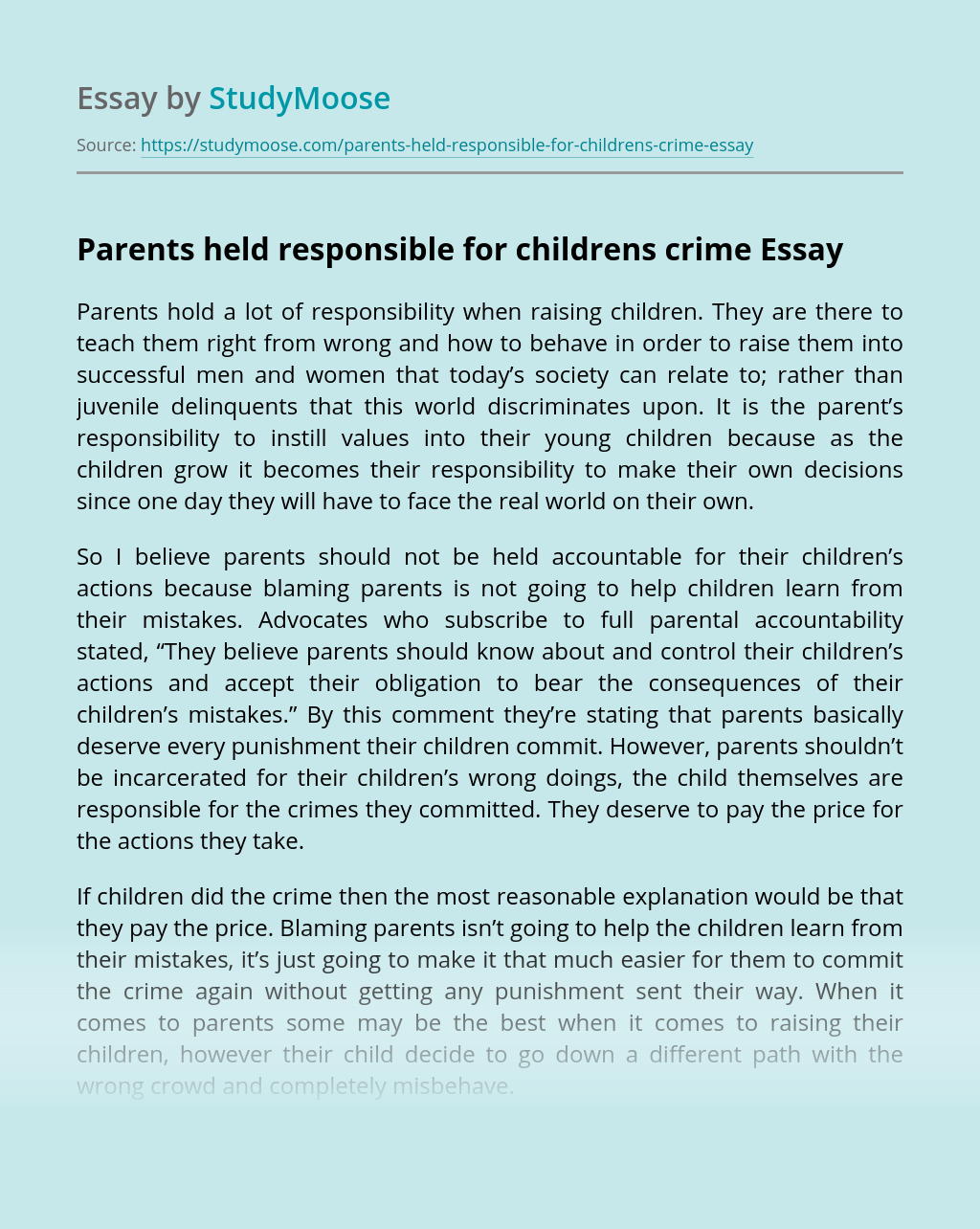