In this paper, the authors examine how the death penalty argument has changed in the last 25 years in the United States. They examine six specific issues: deterrence, incapacitation, caprice and bias, cost innocence and retribution; and how public opinion has change regarding these issues. They argue that social science research is changing the way Americans view the death penalty and suggest that Americans are moving toward an eventual abolition of the death penalty.

Don't use plagiarized sources. Get your custom essay on
“ Summary: the Changing Nature of Death Penalty Debates ”
Get custom paper
NEW! smart matching with writer

Four years later the Supreme Court reversed its course toward abolition by approving several newly enacted capital statutes. By 1999, there were “some 3500 men and 50 women on death rows in 38 states and two federal jurisdictions” (Radelet & Borg, 2000, page 1).

The author describes how there has been fluctuations in the general population opinion regarding the death penalty since its reintroduction in 1976.

While the majority of the American public supports the death penalty, recent studies have shown that this support has diminished a little. “In the early 1970, the top argument in favor of the death penalty was general deterrence” (Radelet & Borg, 2000, page 2). The authors argue that the death penalty does not prevent others from committing the same offense.

They describe how deterrence studies have failed to support the hypothesis that the death penalty is more effective at preventing criminal homicides than along imprisonment.

Another argument used by supporters of the death penalty in past years involves “the incapacitation theory, which suggests that we need to execute the most heinous killers in order to prevent them from killing again” (Radelet & Borg, 200, page 3). The authors discuss how recent research studies have found that those on death row tend to make better adjustment to prison and if released, they exhibit lower rates of repeating the offense.

Today, the argument is not whether this happens or not, but weather the benefits of the death penalty outweighs the possibility of this error. The authors describe retribution as “the most important contemporary pro-death penalty argument” (Radelet & Borg, 2000, page 7). According to this view, those who committed really bad crimes, like homicide, should be executed just because they deserve it; life without parole is just not enough. Those who believe in the death penalty have long used this argument to support the death penalty.

Opponents to the capital punishment argue that the death penalty offers much less to the families of the victims that what it appears. The authors discuss how research has found that life in prison, and life on death row in particular, can be even worse than execution. They argue that it is impossible to calculate how much of any given punishment a criminal deserves and therefore, this decision becomes “more a moral problem and less a criminological issue” (Radelet & Borg, 2000, page 8).

The authors discuss the rapid worldwide movement towards abolition of the capital punishment. In the United States, history shows a gradual rejection of the death penalty. The authors assert how the traditionally death penalty debate has change in the last 25 years in the United States and suggest that careful social scientific research has influence this change. Overview of recent scientific research and its relevance is discussed. They suggest that Americans are moving toward an eventual abolition of the death penalty. 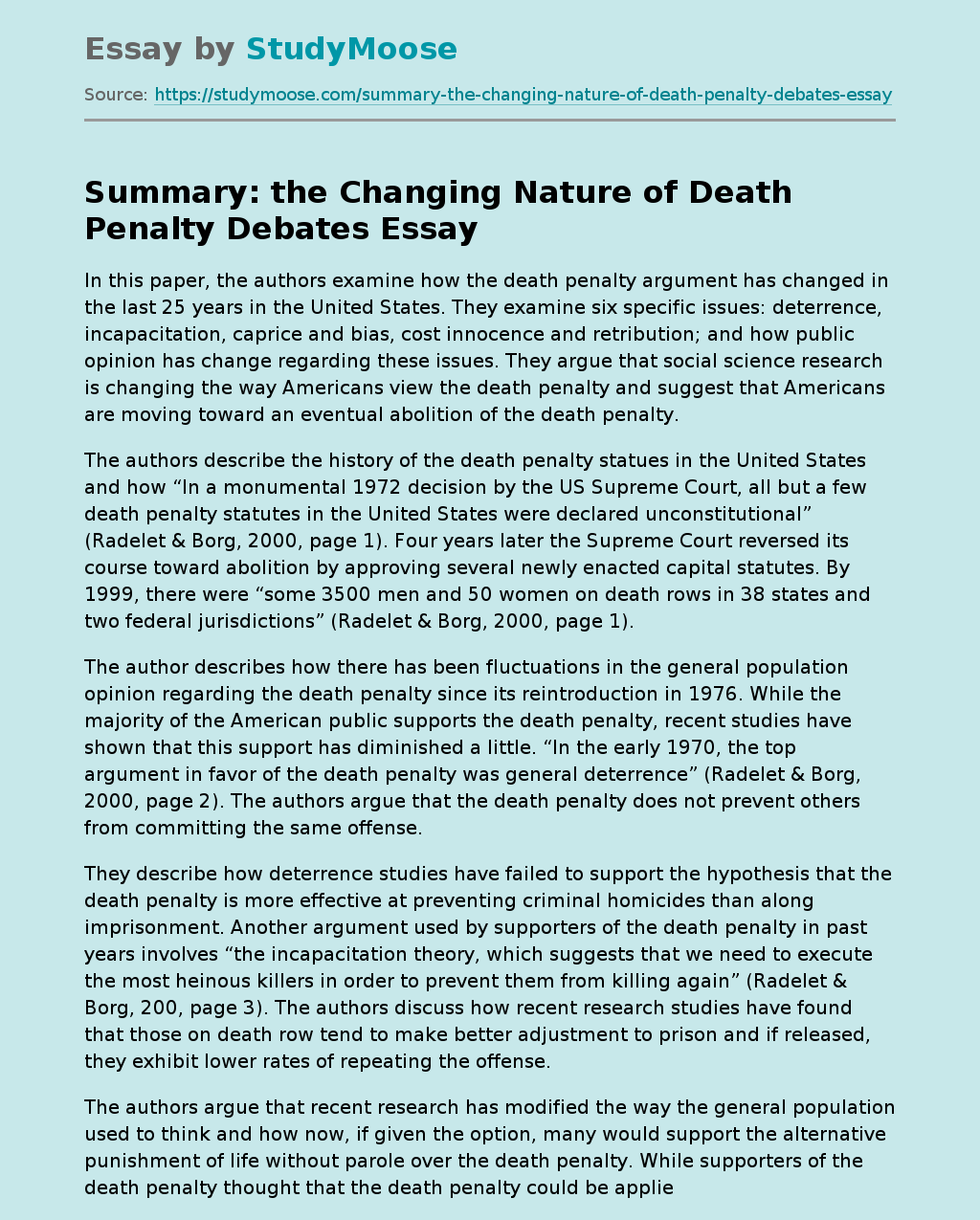