Summary and Response in the Face of Imperialism

In the subtitle “Orthodoxy as ‘Objectivity” of “Thinking About Empire” Michael Parenti argues that all opinions are not of the same value, and the more entrenched the orthodox view becomes, the more irrelevant evidence will be. Firstly, the functions of the heterodox view is to contest the prevailing orthodoxy, to broaden the boundaries of debate, to wake people up and unearth suppressed data. However, the function of orthodox is just the opposite. As we all know, people’s self-protection will be motivated by meeting something they never think about or even never met before.

Don't use plagiarized sources.
Get Your Custom Essay on Summary and Response in the Face of Imperialism Just from $13,9/Page

They will fall back when they are in this kind of situation. Secondly, some inflammatory topics like the legitimacy of the 2004 presidential election in the United State, Shangri-La image of Tibet before the Chinese invasion and so on raise issues.

They break the traditional ideas, deny rational discourse and make an assertion. This process creates the dominant paradigms. However, whether they will be created all depends on their intellectual reputation or even their careers.

In the subtitle “The Myth of Innocent Empires” of the article Michael Parenti argues that empires seem to be innocent unintentional accretions sometimes, however, they actually are not innocent, absent-minded, accidental accretions. Empires have been welcomed and glorified by people by being given empires laudatory names. They are seen as innocent without plans and reasons occasionally like the example of the United State invaded Iraq. Nevertheless, empires are not innocent, because rulers would like to plunder other lands and people by using them such as the British aggression of India and the Americans armed intervention against Iraq.

I agree with Michael Parenti’s idea which is “When the orthodox view becomes so entrenched, evidence becomes irrelevant”. He use one sentence for a paragraph independently, which I think is very important. I think in this way. The orthodox view have been existed for a while, and people always think it’s right, and never question it. When it faces challenges, people’s first reaction is challenges are wrong even there are some evidence. Believe it or not, some ideological cognition and perspectives about something have already been existed in our mind. Before we judge it, we have already had a answer, unless something we never know. When it comes to whether empires are innocent. I also agree with him. Empires are not innocent. There are a lot aggressions cause by empires in history. They took lives from innocent people, destroy the nature, and so on. Although empires once make people get together, makes them apart as well.

Summary and Response in the Face of Imperialism. (2017, Jan 09). Retrieved from https://studymoose.com/summary-and-response-in-the-face-of-imperialism-essay 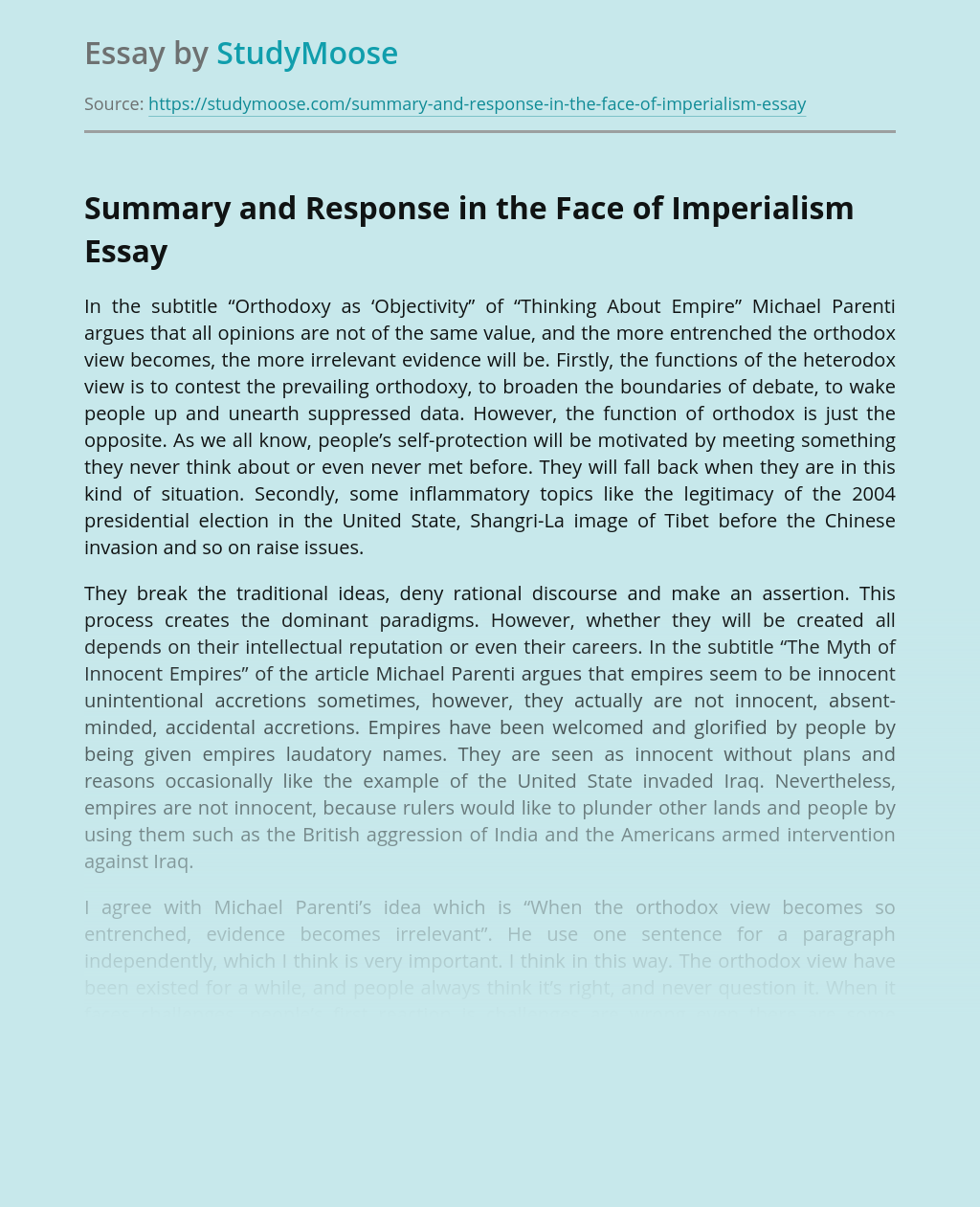 Relaxation Techniques in My Behaviour

Rate this post I believe if I follow “relaxation techniques” as per my plan and strategies I can get rid of “cracking-knuckles” There are so many features that differentiate to one’s personality starting from childhood, either it would be good or bad. I have several of habitual behaviour habits that I to change. I would...

Rate this post 1. Executive Summary In 2009, the transport and logistics market in the GCC was worth an estimated US$20bn, and is expected to continue growing at slightly more than 10% per annum, rising to US$27bn by 2012. Throughout the logistics value chain, net operating profits range from as low as 5% in air...

Rate this post However, other brands are engaging in more aggressive advertising and increasing brand awareness, bridging the gap of perceived difference between BRAND’S and their products, and offering buyers more choices, hence buyers have medium power. Supplier bargaining power BRAND’S ingredients are mainly chicken essence and a small proportion of caramel. Although these ingredients...

Should Police Officers Have Higher Education

Rate this post Ought to Police need to have higher education than the majority of people they deal with on a day to day basis?I state yes and here are some reasons. Authorities Education has been long because disputed in the United States. Law Enforcement should be the one who are correctly informed if they...