With what success did New Liberalism use state intervention to improve living conditions between 1906 and 1914?

Before the large Liberal gains that were made in the 1906 elections and subsequent large majority in government the Liberals had maintained a lassiez fraire approach to government which extends all the way back to its implementation with Gladstone, therefore fittingly it was named Gladstonian liberalism. However with the landslide election victory of 1906 the liberals had a working majority to implement social reform. This emphasis on social reform came about in no small part thanks to the tireless work of a group of men.

Don't use plagiarized sources. Get your custom essay on
“ With what success did New Liberalism use state intervention to improve living conditions between 1906 and 1914? ”
Get custom paper
NEW! smart matching with writer

Among them was Charles Booth who’s work “Life and Labour of the people of London” in this survey booth ascertained that worryingly 30 percent of the population lived below the “poverty line”. With this work from Booth was the work of Rowntree whose “study of town life” showed that the same mass unemployment problem and unacceptable level of poverty was also rife in York. Coupled with this was “Unemployment: A Problem of Industry (1909) a book written by civil servant William Beveridge, he believed that unemployment was an inevitable part of the capitalist system.

As well as identifying the fundamental flaws in society concerning the working classes, these influential publications also helped change emphasis about its causes. The authors emphasized old age as a major problem, citing that often old age renders people incapable of earning a living and often leads to destitution. As well as this these reports highlighted the link that existed between poverty and illness.

This finding of the report was underlined by the committee of physical deterioration, set up after recruitment for the Boer war showed a lack in physical efficiency in potential recruits.

These findings proved shocking and distressing to educated opinion that could no longer base opinion on ignorance of the facts and were jolted into a course of action. These findings were to prove the driving factor in Liberal Reforms of the subsequent years. However although clearly a major concern to ministers of the time another factor was driving the ministers to social reform.

Germany who was the main rival of the British Empire at the time and a threat to its dominance as the superpower had a populace who was not only physically but also mentally stronger than the British population. This was of course of major concern to Britain who could not afford to fall behind a possible military rival such as Germany in maters such as these. This then is the reasoning behind the social reforms implemented by the Liberals, but what exactly were these reforms and did they make the appropriate impact upon the British people?

The first area I am going to cover that was dealt with by the Liberals was the problem of children. There was a widespread concern within Britain at the time that children were undernourished indeed this view was underlined by the Committee on Physical Deterioration (C. P. D) who argued for free school meals and medical inspections. This idea was taken up by a Labour MP who introduced a Bill to provide free school meals, this bill was passed to law in 1906 as the education (provision of Meals) Act, 1906.

However the act did not make it compulsory for Local Education Authorities (LEA’s) to add to local rates for money and feed destitute children, and by 1911 only a third of LEA’s had implemented the policy. The following year a clause for medical inspections was slipped subtly into the Education (Administration Provisions) Act which allowed medical visits to elementary schools; this clause had to be covertly placed into the bill by permanent secretary Sir Robert Morrant because he knew their would be opposition from several liberals.

This Bill was a landmark one because although it wasn’t mandatory it did mark a departure from the previous view of the sate that it was purely a family matter. It showed the government taking a stanch and accepting the matter affected everyone and in taking responsibility departing completely from the previous lassaiez fraire approach. The 1908 Children’s act consolidated all these measures and drew up a “Children’s charter” of sorts, this was a codifying measure which brought together the previous 39 statutes which dealt with children into one measure.

As well as this it served to define negligence and cruelty, set up child courts and remand homes, which helped remove children from adult prisons, as well as making it illegal for children to smoke!!! I have shown the improvements attempted in the first area concerning children, these attempted improvements were made after reports from the committee on physical deterioration. The next area tackled was that of matters affecting the old was based primarily on the findings of Rowntree and Booth who concluded that old age was a major factor for the poverty being felt by Britain’s working class population.

Britain had been very slow in introducing pensions and in doing so release he burden of debt from the old age members of the lower classes. Countries such as Germany and New Zealand had introduced them as early as the 1880’s and this idea was taken up quickly by other countries around the world. The British government should have been right behind them in implementing this policy what with the reports from Booth, Rowntree and its own committees in outlining the problems with old age poverty and supporting the implementation of old age pensions.

Unfortunately early attempts to introduce a pension system had failed despite the support of political heavyweights such as Joseph Chamberlain, because of the staunch defiance of the treasury who argued the scheme would cost too much money. Another major obstacle in earlier attempts to set up a pension scheme was the charity organization something which was set up in 1869 because middle class people were worried that to much charitable aid was being given to those who didn’t deserve it.

The purpose of this organization was to make sure poor people helped themselves rather than relying on state contributions. To this extent charity organizations were in keeping with the old Liberal approach of laissez faire. However by 1906 opinion was changing and in his 1908 budget Asquith introduced a non contributory pension system which would provide 5 shillings a week to over 70’s with half as much again for married couples whose income was over i??31 a year. Many MP’s such as Phillip Snowden thought that the measure was not enough and that very few people would reach this age.

The government however made no pretence that the scheme was a substitute for saving as explained by Winston Churchill “We have not pretended to carry the toiler to dry land. What we have done is strap a lifebelt round him”. Although there were some exceptions to the scheme for instance those who had claimed poor relief in the last ten years and ex convicts it was immediately popular with the working class, and Lloyd George chancellor at the time “sold” it with vigor despite some opposition to the cost within his own party.

As shown earlier in my essay in discussion of the findings of Rowntree and Booths reports and the conclusions reached by the committee on physical deterioration sickness was seen as a cause of poverty. Therefore in keeping with the attempted healing of social wrong the Liberals tried to repair this. Lloyd George had made a trip to Germany and was “tremendously impressed” by there health insurance. The system that he proposed was for a contribution of 4d to be deducted from the worker the employers would pay 3d and the state 2d.

Those taking part would also receive ten shillings a week benefit if they fell ill and free medical care from as local doctor. This act was not particularly popular with hard liners from the left such as Labors socialist leader Keir Hardie who saw the system as “porous plaster to cover the disease which poverty causes”. Hardie would have much preferred to tackle the underlying principle of the problem which lied deep in the roots of the capitalist system.

However George managed to get the act passed and modern historians such as Garvin argue that the first part of the National Insurance Act was “the greatest scheme of social reconstruction ever yet attempted”. The government introduced many other measures that were aimed to help poorer people like for instance Labour exchanges which were the brainchild of William Beveridge and piloted through the commons by Winston Churchill. These gave invaluable help to workers who had lost there job and needed to find new employment.

Other measures like the workman’s compensation act of 1906 aided those who worked din awful conditions and enabled people who were injured at work to claim compensation from their employers. As well as this the concentrated pressure of the working class vote was very successful in forcing the government to improve the rights of trade unionists. For example the Trade Disputes Act reversed the Taff Vale judgment of 1901 which meant that trade unions were no longer liable for damages caused by pickets. All these measures then add up to paint a rosy picture for Liberal social reform but just how effective was this reform?

The answer to that is not clear, however what is clear is that the welfare state lay in the future, the old fashioned ideas and philosophies of some ministers meant that state intervention was not as effective as it could have been. Changes were often modest in scope and some areas of society remained unformed and therefore ineffective. The attack of Liberal schemes in this period often came from the left and tried to show Liberal reform was not far reaching enough and demonstrate the need for a Labour party.

Some critics also argue that reform was only really the work of two men Churchill and Lloyd George who dragged the Liberal party behind them. Even men such as Lloyd George were portrayed as men with a shrewd political mind who realized the importance of gaining the lower class vote and so made sum concessions to them rather than wanting actual social change. Finally however, it is clear that the Liberal government had made a hue departure from the laissez faire Liberalism of Gladstonian politics and tried to make a positive intervention and for this they should be commended!!

With what success did New Liberalism use state intervention to improve living conditions between 1906 and 1914?. (2020, Jun 02). Retrieved from https://studymoose.com/success-new-liberalism-use-state-intervention-improve-living-conditions-1906-1914-new-essay 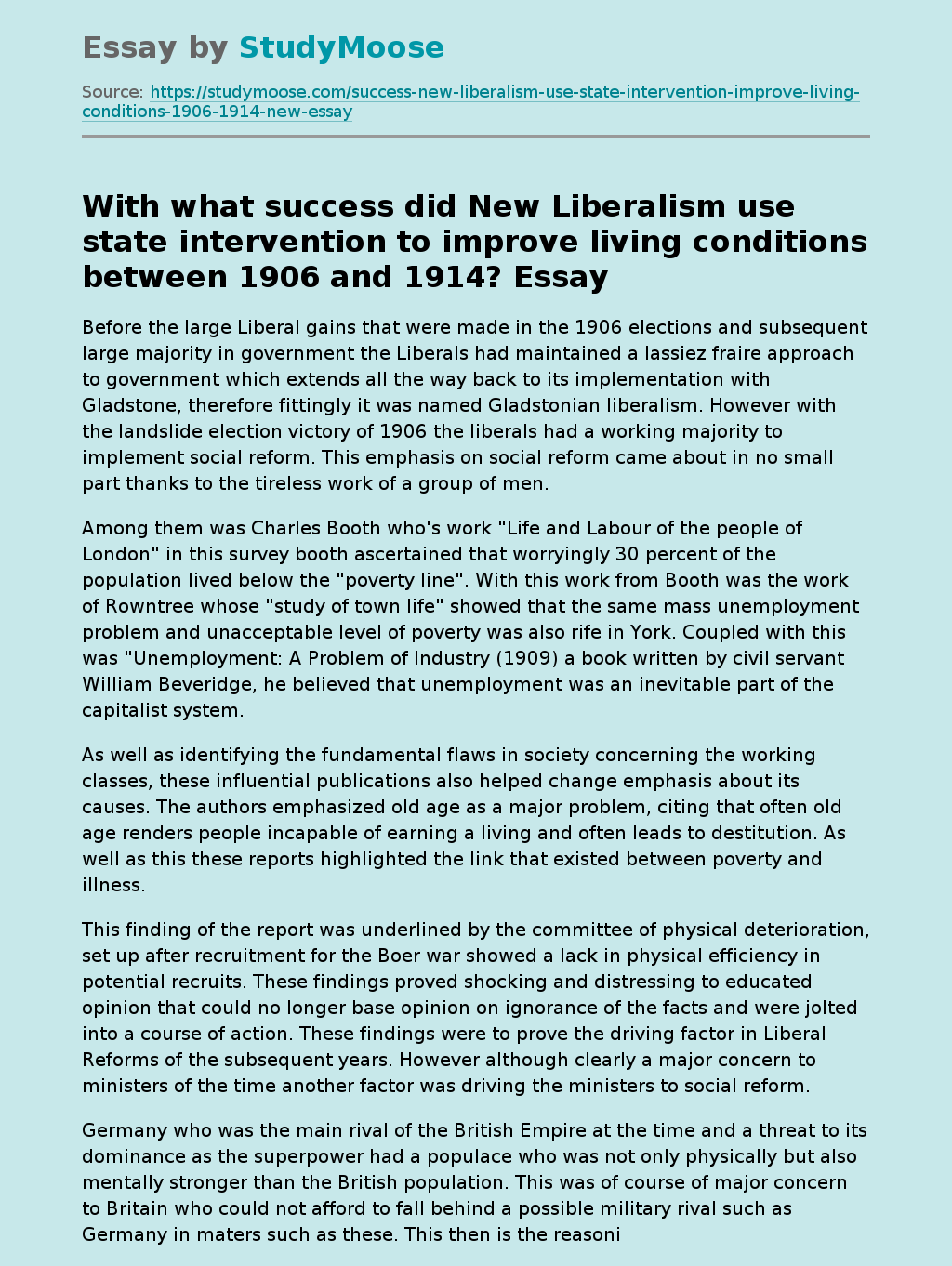