Discuss the novel’s shifts in narrative perspective. What is the effect of presenting different characters’ viewpoints, especially those of Victor and the monster? Narrative in Frankenstein shifts from Robert Walton to Victor Frankenstein to the monster and finally back to Walton. With each shift of perspective, the reader gains new information about both the facts of the story and the personalities of the respective narrators. Each narrator adds pieces of information that only he knows: Walton explains the circumstances of Victor’s last days; Victor explains his creation of the monster; the monster explains his turn to evil.

Don't use plagiarized sources. Get your custom essay on
“ Study Questions and Essay Topics in Frankenstein ”
Get custom paper
NEW! smart matching with writer

The differences in perspective between the narrators are sometimes stark, especially since Victor and the monster stand in opposition to each other for much of the novel.

From Victor’s point of view, the monster is nothing but a hideous and evil creature; from the monster’s account, on the other hand, it becomes clear that he is a thinking, feeling, emotional being.

The recounting of the murder of William Frankenstein is a prime example of the impact of perspective: while Victor’s description, colored by the emotional letter from his father, focuses on the absolute evil of the act, the monster’s version of events centers on the emotional circumstances surrounding it. Even if one cannot sympathize with the monster, one can at least understand his actions. This kind of dual narration is one of the more interesting consequences of the complicated narrative structure that Shelley implements. 2.

Trace and discuss the role of letters and written communication throughout the novel.

The entirety of Frankenstein is contained within Robert Walton’s letters, which record the narratives of both Frankenstein and the monster, to his sister (even Shelley’s preface to the book can be read as an introductory letter). Walton’s epistolary efforts frame Victor’s narrative, which includes letters from Alphonse and Elizabeth. Like Walton’s, these letters convey important information that serves to advance the plot and offer some sense of authenticity to an implausible story. Additionally, Victor’s inclusion of these personal letters in his narrative allows Alphonse and Elizabeth to express themselves, shedding light on their respective concerns and attitudes, and thus rendering them more human. Shelley’s use of letters enables the shift of narrative from one character to another while remaining within the bounds of the standard novel.

Letters also serve as a means of social interaction, as characters are frequently out of immediate contact with one another. Walton never encounters his sister in the novel; his relationship with her is based wholly on correspondence. Likewise, Victor often isolates himself from his loved ones; the letters from Alphonse and Elizabeth mark attempts to connect with him. Even the monster uses written communication to develop a relationship with Victor when, at the end of the novel, he leads him ever northward by means of notes on the trees and rocks he passes. 3.

Discuss the presentation of women in the novel. Do Victor and the monster differ in their view of women, and if so, how? Women in Frankenstein are generally pure, innocent, and passive. Though there are a few exceptions, such as Caroline Beaufort, who works to support her impoverished father, women are generally seen as kind but powerless. For example, Elizabeth stands up for Justine’s innocence but cannot prevent her execution. For both Victor and the monster, woman is the ultimate companion, providing comfort and acceptance. For Victor, Elizabeth proves the sole joy that can alleviate his guilty conscience; similarly, the monster seeks a female of his kind to commiserate with his awful existence. Each eventually destroys the other’s love interest, transferring woman’s status from object of desire to object of revenge; women thus are never given the opportunity to act on their own.

In the context of passive female characters, it is interesting to note that Mary Shelley’s mother, Mary Wollstonecraft, was the author of the strongly feminist A Vindication of the Rights of Woman. One can argue that Frankenstein represents a rejection of the male attempt to usurp (by unnatural means) what is properly a female endeavor—birth. One can also interpret the novel as a broader rejection of the aggressive, rational, and male-dominated science of the late seventeenth and early eighteenth century. Though it was long met with mistrust, this science increasingly shaped European society. In this light, Frankenstein can be seen as prioritizing traditional female domesticity with its emphasis on family and interpersonal relationships. Suggested Essay Topics

1. Discuss the role of sickness in the novel. Victor often seems to fall ill after traumatic events. Is this a means of escape, and, if so, is it effective? Is there another explanation for his recurring illness? 2. Do the monster’s eloquence and persuasiveness make it easier for the reader to sympathize with him? Why do you think most film versions of the story present the monster as mute or inarticulate? 3. Trace the similarities between Victor and the monster. Consider their respective relationships with nature, desires for family, and any other important parallels you find. Do Victor and the monster become more similar as the novel goes on? How does their relationship with each other develop? 4. Victor attributes his tragic fate to his relentless search for knowledge. Do you think that this is the true cause of his suffering? In what ways does the novel present knowledge as dangerous and destructive? 5. Examine the role of suspense and foreshadowing throughout the novel. Do you think these devices are effective, or does Victor’s blatant foreshadowing reveal too much? How does foreshadowing differ among the three main narrators (Walton, Victor, and the monster)? 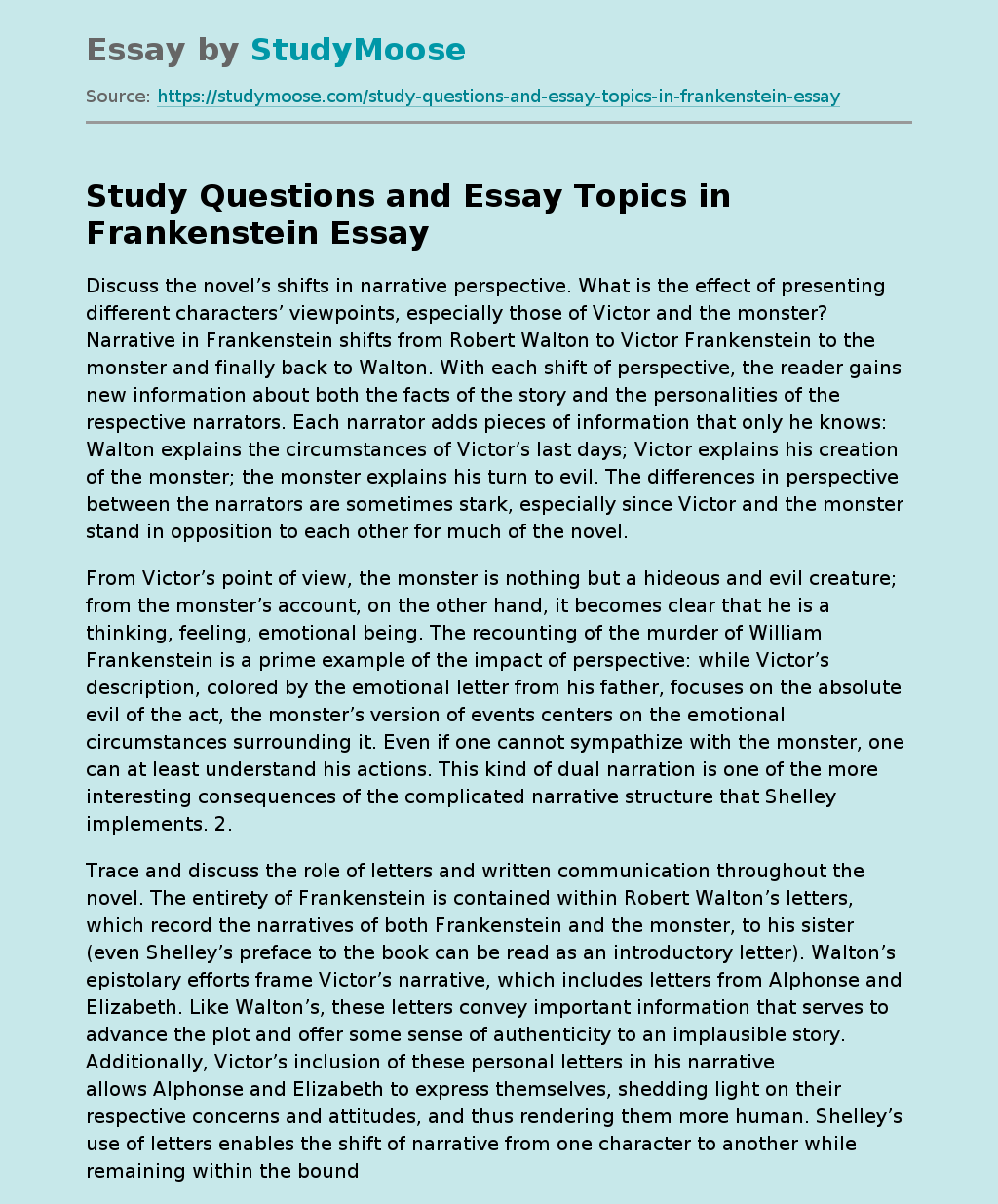