Romeo and Juliet All Study Guide Questions and Answers

Prologue: In what city does this play take place?
Verona, Italy
Prologue: Why are Romeo and Juliet called “Star-cross’d lovers” ?
They are not destined to be together
Act 1 scene 1: Who is fighting at the beginning of the first scene?
servants of the Capulets and the Montagues
Act 1 scene 1: Who tries to break up the fighting?
Benvolio
Act 1 scene 1: What threat does the Prince make to Lord Montague and Lord Capulet?
That the next person to start a public brawl will be put to death
Act 1 scene 1: Benolio and Montaguue describe the way Romeo has been acting.
Don't use plagiarized sources. Get your custom essay on
“ Romeo and Juliet All Study Guide Questions and Answers ”
Get custom paper
NEW! smart matching with writer

What do they say about him

What does he tell Paris?

Paris must win her heart and Juliet must agree. Then he will marry them
Act 1 scene 2: What is the name of the woman Romeo loves?
Rosaline
Act 1 scene 2: Where do Romeo and Benvolio decide to go?
Go to the party
Act 1 scene 3: When Lady Capulet asks Juliet how she feels about the marriage, what is Juliets answer?
Its an honor she dreams not of
Act 1 scene 3: Following Juliets answer, what does the Lady Capulet then tell Juliet?
That many kids get married and have kids at her age, even Lady Capulet, and she is to go to the party and look at Paris
Act 1 Scene 4: What does Mercutio say about dreams?
That dreams mean nothing
Act 1 scene 5: What does Romeo think of Juliet when he firsts sees her?
That he “has not seen true beauty till this night”
Act 1 scene 5: When Tybalt is ready to seize Romeo and throw him out of the party, what does Capulet say to Romeo?
to let him be for Verona speaks good of him
Act 1 scene 5: Explain what the conversation is about between Romeo and Juliet
Talking about kissing and pilgrams hands
Act 1 scene 5: How does Romeo find out about Juliets name?
He asks the Nurse and she tells him
Act 1 scene 5: How does Juliet find out about Romeo’s last name?
The nurse finds it out for her
Act 2 scene 1: What is Romeo’s new problem?
He loves a Capulet
Act 2 scene 2: In lines 109-111, Juliet asks Romeo not to swear by the moon…why is she afraid of this?
The moon constantly changes and she doesn’t want Romeos feelings to change
Act 2 scene 2: What is the only way that Juliet will give herself to Romeo
If they get married
Act 2 scene 3: What does Romeo ask Friar Lawrence to do?
To marry them (Romeo and Juliet)
Act 2 scene 3: Why does Friar agree to marry the two young lovers?
It may stop their families feuds
Act 2 scene 4: Why has the nurse come to the square?
To find out about the wedding arrangements
Act 2 scene 4: What information does Romeo give the Nurse?
Where and when the wedding will be
Act 2 scene 4: Mercutio teases the Nurse, and she is outraged.
Get to Know The Price Estimate For Your Paper
Topic
Number of pages
Email Invalid email

What does Romeo say about Mercutio to calm her down?

Romeo and Juliet All Study Guide Questions and Answers. (2018, Jan 02). Retrieved from http://studymoose.com/romeo-and-juliet-all-study-guide-questions-and-answers-essay 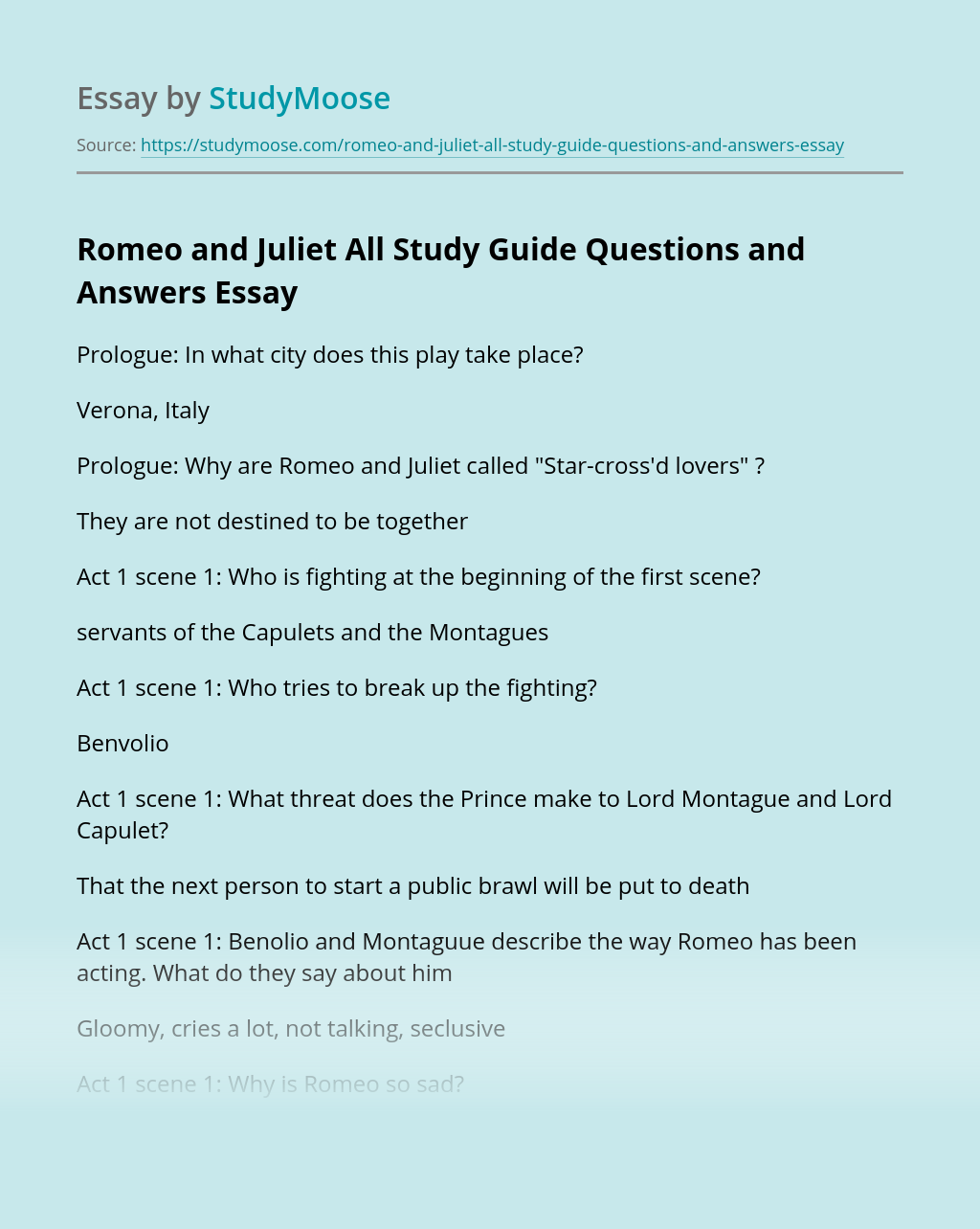