Questions and Answers: The Catcher in the Rye

1.What happened at the beginning, middle, and end? 2.Who are the characters in the story, and what are they like? Holden Caulfield – The protagonist and narrator of the novel, Holden is a sixteen-year-old junior who has just been expelled for academic failure from a school called Pencey Prep. Although he is intelligent and sensitive, Holden narrates in a cynical and jaded voice. He finds the hypocrisy and ugliness of the world around him almost unbearable, and through his cynicism he tries to protect himself from the pain and disappointment of the adult world.

Don't use plagiarized sources. Get your custom essay on
“ Questions and Answers: The Catcher in the Rye ”
Get custom paper
NEW! smart matching with writer

However, the criticisms that Holden aims at people around him are also aimed at himself.

He is uncomfortable with his own weaknesses, and at times displays as much phoniness, meanness, and superficiality as anyone else in the book. As the novel opens, Holden stands poised on the cliff separating childhood from adulthood. His inability to successfully negotiate the chasm leaves him on the verge of emotional collapse. Ackley – Holden’s next-door neighbor in his dorm at Pencey Prep.

Ackley is a pimply, insecure boy with terrible dental hygiene. He often barges into Holden’s room and acts completely oblivious to Holden’s hints that he should leave. Holden believes that Ackley makes up elaborate lies about his sexual experience.

Stradlater – Holden’s roommate at Pencey Prep. Stradlater is handsome, self-satisfied, and popular, but Holden calls him a “secret slob,” because he appears well groomed, but his toiletries, such as his razor, are disgustingly unclean. Stradlater is sexually active and quite experienced for a prep school student, which is why Holden also calls him a “sexy bastard.

” Jane Gallagher – A girl with whom Holden spent a lot of time one summer, when their families stayed in neighboring summer houses in Maine. Jane never actually appears in The Catcher in the Rye, but she is extremely important to Holden, because she is one of the few girls whom he both respects and finds attractive.

Phoebe Caulfield – Phoebe is Holden’s ten-year-old sister, whom he loves dearly. Although she is six years younger than Holden, she listens to what he says and understands him more than most other people do. Phoebe is intelligent, neat, and a wonderful dancer, and her childish innocence is one of Holden’s only consistent sources of happiness throughout the novel. At times, she exhibits great maturity and even chastises Holden for his immaturity. Like Mr. Antolini, Phoebe seems to recognize that Holden is his own worst enemy. Read an in-depth analysis of Phoebe Caulfield.

Allie Caulfield – Holden’s younger brother. Allie dies of leukemia three years before the start of the novel. Allie was a brilliant, friendly, red-headed boy—according to Holden, he was the smartest of the Caulfields. Holden is tormented by Allie’s death and carries around a baseball glove on which Allie used to write poems in green ink. Sally Hayes – A very attractive girl whom Holden has known and dated for a long time. Though Sally is well read, Holden claims that she is “stupid,” although it is difficult to tell whether this judgment is based in reality or merely in Holden’s ambivalence about being sexually attracted to her. She is certainly more conventional than Holden in her tastes and manners.

Mr. Spencer – Holden’s history teacher at Pencey Prep, who unsuccessfully tries to shake Holden out of his academic apathy. Carl Luce – A student at Columbia who was Holden’s student advisor at the Whooton School. Luce is three years older than Holden and has a great deal of sexual experience. At Whooton, he was a source of knowledge about sex for the younger boys, and Holden tries to get him to talk about sex at their meeting. Mr. Antolini – Holden’s former English teacher at the Elkton Hills School. Mr. Antolini now teaches at New York University. He is young, clever, sympathetic, and likable, and Holden respects him. Holden sometimes finds him a bit too clever, but he looks to him for guidance. Like many characters in the novel, he drinks heavily. Read an in-depth analysis of Mr. Antolini.

Maurice – The elevator operator at the Edmont Hotel, who procures a prostitute for Holden. Sunny – The prostitute whom Holden hires through Maurice. She is one of a number of women in the book with whom Holden clumsily attempts to connect. D. B. Caulfield – Holden’s older brother. D. B. wrote a volume of short stories that Holden admires very much, but Holden feels that D. B. prostitutes his talents by writing for Hollywood movies.

3.Which ones changed? Explain how the characters that changed. 4.Which ones stayed the same? 5.What is the setting of the story? Does it remain constant? If not, list all settings. 6.What effect does the setting have on the story? (If you changed the setting, how would the story change?) · Holden begins his story in Pennsylvania, at his former school, Pencey Prep. He then recounts his adventures in New York City 7.If you wanted to give this story a different a title, what would it be and why? 8.Find one place in the text where the author uses language in an interesting way. Explain why it is interesting.

Questions and Answers: The Catcher in the Rye. (2017, Feb 01). Retrieved from http://studymoose.com/questions-and-answers-the-catcher-in-the-rye-essay 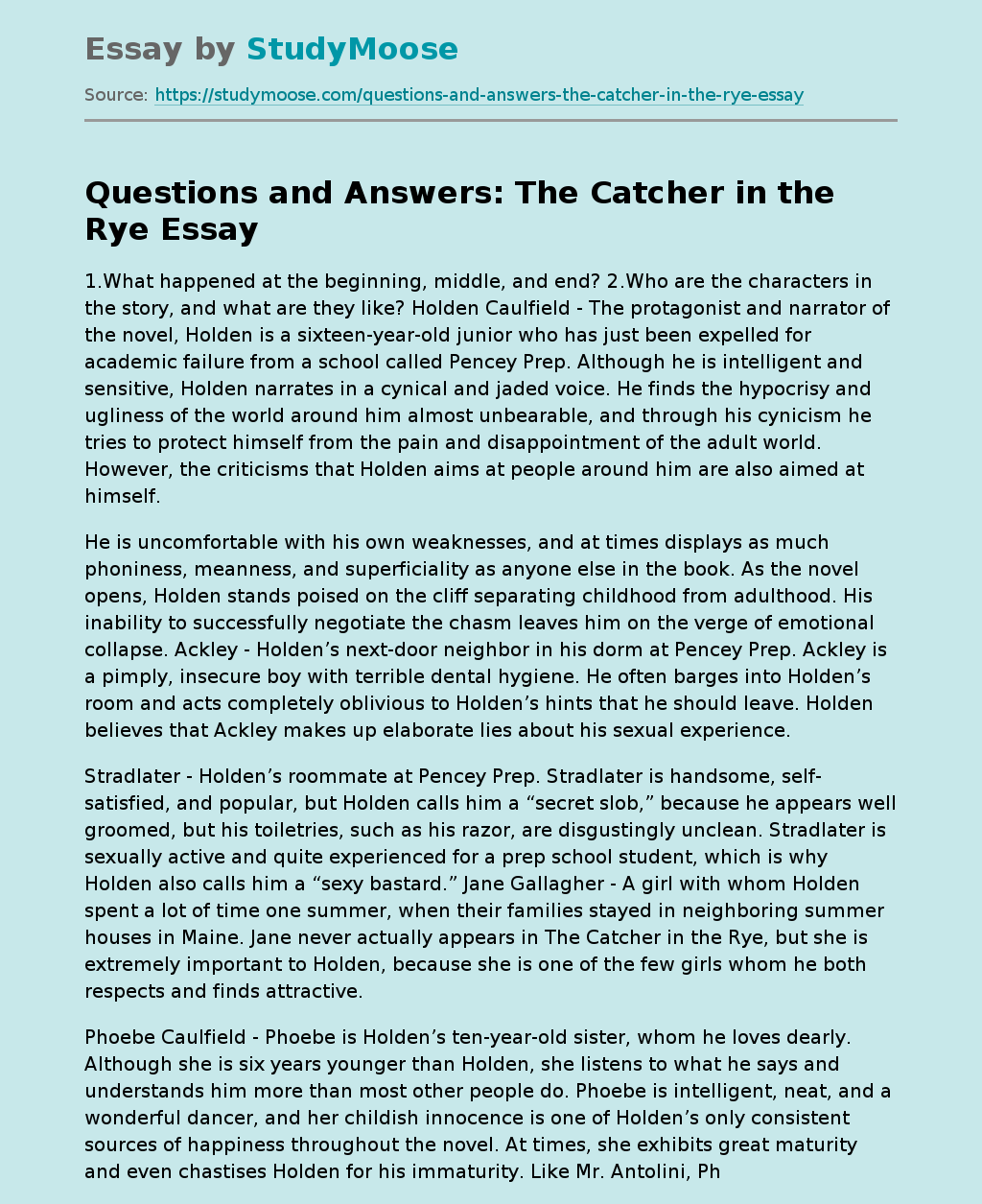