Gun control in the United States has been a controversial issue over past years, especially in light of the recent events of the Sandy Hook Elementary school shootings. Gun control is the regulation of the selling, owning, and use of guns. Americans have many reasons for owning and using fire arms, both positive and negative. The second Amendment of the Constitution gives the rights to American citizens to keep and bear arms.

On the positive side of the issue for stricter gun control laws in the United States, there are many reasons how we can keep a safer environment inside our country.

Stricter gun control laws will decrease the overall number of accidental shootings. It will also make it more difficult for criminals to obtain guns. Semi-automatic weapons, which are the leading types of guns used in mass shootings could be eliminated from being able to be purchased and will ultimately lower the number of overall deaths if a shooting were to occur.

Creating stricter gun control laws could also hurt or have no effect on the number of overall shooting in the United States. People who want guns and are unable to obtain them legally, can purchase them through the black market. Most people simply want guns for their own protection and self-defense.

The majority of gun owners admit that owning a gun gives them a feeling of assurance and security. The ownership of a gun adds to the safety of the owner especially during dangerous incidents like, burglary, attempted murder, and other crime alike.

Prohibition is not the best solution. Banning guns will not kill gun culture. The use of guns will not disappear or make them any less dangerous. It could even promote illegal purchases of guns. As stated in the previous paragraph, safety is a need, and people are most likely to do whatever it takes to assure it for themselves and for their families. Citizens are not only capable but also have the right to protect themselves, their families, and their property. If owning a gun is the easy, then why not?

Many people also need guns for other reasons. Farmers need fire arms to protect their fields and livestock from wild animals. If the banning of guns will push through, the livelihood of these people will be greatly affected. The least that could happen is them resorting to technologies that are way above their budget to compensate for the security provided to them by the confiscated guns. If the banning of guns is after the welfare of the people, these realities are not to be disregarded and should be considered. Though these people are a minority compared to the whole population, their voices should be treated as those of the majority.

Shooting is a major sport enjoyed by many law-abiding citizens in the United States. Just like other sports, shooting is recreational; it promotes discipline, and camaraderie and healthy relationships among its enthusiasts and practitioners. There are even more sports that are considered to cause more injuries compared to shooting sports. Statistically, the sport with most injuries reported is basketball; shooting injuries are less likely to happen because the guns are not pointed at humans but to inanimate, lifeless targets. Practicing shooting for hurting people is not the intention of the sport. Shooters shoot objects to improve accuracy and precision in shooting lifeless objects, and lifeless objects alone. Sportsmen have the right to continue their chosen leisure activity. Also, spending on guns and ancillary equipment commissions large sums of income into the economy.

Law-abiding citizens are worthy of the right to protect their families in their own homes. Even with the banning of guns, criminals will still have access to firearms sold in the black market. In fact, most guns used in heists and organized crimes are guns do not have legal papers, sold in the black market. Thus, the banning of guns will put the potential victims into a disadvantage. Law abiders will not even think of buying from the black market. Criminals do not think this way. They buy from the black market because it makes them harder to track down. Would-be rapists and armed burglars will think twice before attempting to break into a house where owners may keep firearms.

Some incidents of shooting are often prevented when both parties owning guns. Though the guns assure self defense, it does not actually help you dodge bullets. It is only an advantage when, the other party is in no possession of a gun. Thus, when an armed attacker is aware of you owning a gun, he would begin to have second thoughts about using his gun because of the possibility of being shot back. Therefore, this fear of being shot back neutralizes the attacker’s urge to shoot the victim. Instead of a life lost, a life is spared.

Gun control has been a very controversial and heated topic worldwide. Guns are the reason why the crime rate is still high and it will remain or increase if there are no actions that will be taken to lessen the illegal use of firearms. The main function of a gun, like any other weapon, is to kill. Guns were invented to be used in war. Though guns have the potential to protect its owner from harm, the fact that someone from the other party will be, or should be, consequently harmed does not justify its purpose. Though the understanding of this idea will vary among different levels of morality and beliefs, the fact of someone getting hurt, a bad person or a good person, should not be disregarded. The use of guns to promote peace will be ineffective without its capacity to harm others. Though guns are not the only weapons, they are certainly more effective in taking away lives.

The death rate when a gun is used is much higher than when knives or other weapons are used during an attack. Household brutality assaults involving guns are twelve times more likely to bring about fatalities than those without guns. These facts are nothing new. Shooters generally shoot to kill, and, even if they shoot to maim or warn, the unpredictable trajectory of bullets can still kill. The more instruments of demise and harm we remove from our social norms, the more secure we will be.

The law has already made appropriate penalties for crimes like theft; burglary should not be punished by vigilante killings. Nothing is worthy enough to pay for a human life. Even crimes of murder are not punishable by death, the legal sanctions for these crimes should be treated as seriously, unbiased, like legally owning a gun – which is difficult to observe because most killings involving guns are initiated when the shooter is in a high emotional state, not in his/her rational mind.

In 2005, 75 reported cases of children 14 and below died from accidental firearm-related injuries; most children of this group have ages ranging from 10-14 years old. The majority of unintentional gun-related deaths among children take place in or around the household; 5 out of 10 cases occur at the victim’s home while 4 out of ten cases happens at a friend or relative’s house . Keeping firearms at home for protection often leads to accidental deaths.

Common cases for gun shootouts is that people possessing it have mental illness, goes out and shoot people. People with mental illnesses have no right to possess firearms but the problem is that sellers of these guns do not know if the buyer is mentally ill until they go out and shoot people. The government, though they did something about this case. The issue on the mentally ill people who can easily possess guns is on heat especially on the recent case of shooting in the United States. People with tendency towards violence and those with histories of mental illness are not allowed to be able to obtain firearms in the United States. But experts, as what they call themselves, says that the laws pertaining to the possession of firearms is only applicable to people who have been considered by the authorities to be unsafe. The government mandates that people should be evaluated before the issuance of firearms to them. Background checks and interviews are supposed to be done before a person can acquire any firearms. The problem is that the government has insufficient funds to sustain the process. Thus, the government resorted to just allow the people who would like to acquire firearms after conducting simple tests.

My opinion on this matter is simple and goes along with the saying “guns don’t kill people, people kill people. Although gun laws today are becoming stricter, individuals who want to kill or harm others will still be able to do so. Regardless of how hard it is to obtain a firearm, a person can still find other ways to harm others, even without guns. The issue whether or not semi-automatic weapons should be allowed to be sold is something that is understandable and can have a positive effect. These types of weapons should certainly not be used for hunting, and have no reason to be on the streets of our country. The difference in the number of people one can harm or kill is drastically different and can make an overall difference in the number of deaths each year.

After the Sandy Hook Elementary School shooting, several people began to talk about buying a gun before stricter laws came into effect. My own father did just that. My mother has always been against having a gun inside her home until recently. She had realized that it is better safe than sorry. My dad went and applied for a permit to own a gun and is currently in the process of a background check. He plans to keep it locked up, and used only if necessary.

I personally feel safer, and better about the well-being of my parents if they have a gun for protection inside their home. There are countless numbers of robberies and attacks that occur every day in our country. Owning a weapon for the pure safety of yourself and your family is a valid reason in my mind.

The fundamental goal of the laws pertaining to owning a gun is to keep the firearms to those people that are most likely to do violent actions and those that are mentally challenged. But then there is no existing effective system that can prevent these people to legally getting a gun. The government has to do something about the stricter implementation of the laws pertaining to the people who are mentally ill and wishes to get a gun. Access to mental health plays a vital role in this case thus even the government should look over its beneficiary requirements and funding. The required background checks and mental health evaluations should be stricter and more informative so that proper data and evidence can be evaluated properly and it could be a great help to lessen violence in the United States. 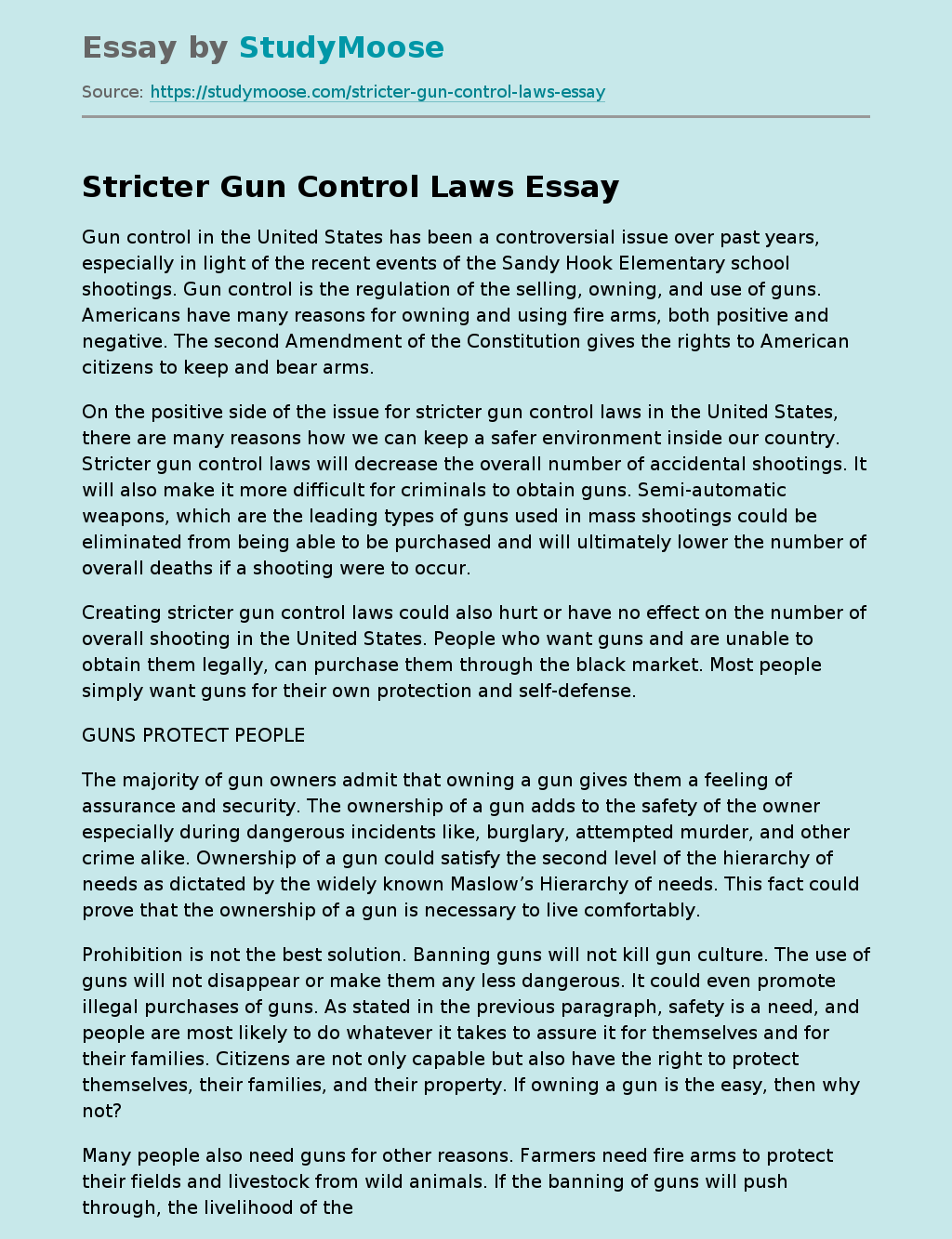