The Relationship between Gun Laws and Gun DeathsNameInstitutional affiliationThe Relationship between Gun Laws and Gun DeathsMost studies consider gun control as a serious global issue. In that, some countries, such as China, have adopted strict policies linked to gun control. On the other hand, in countries such as the U.S. people are free to secure licenses that allow them to buy or own guns. Guns can have positive or adverse effects when individuals are allowed to own them. For instance, one could use a gun to protect himself.

Don't use plagiarized sources. Get your custom essay on
“ GUN LAWS AND GUN DEATHS ”
Get custom paper
NEW! smart matching with writer

However, the same person might use that gun to kill another innocent person. I recommend more gun policies because it favors the welfare of society. Therefore, the paper discusses the importance of adding stricter laws for individuals who need a gun license. Also, the paper presents the need for further policies on illegal guns. Thus, the following references note that countries must adopt stricter gun control laws for people to enjoy a stable and peaceful environment.

Grillot, S. R. (2011). Global gun control: Examining the consequences of competing international norms. Global Governance, 17(4), 529-555.Grillot (2011) discusses details that why the administration should stop the rampant spread of firearms, despite it being hard to accomplish. Firearms are real weapons serving an assortment of needs, for example, policing, giving of the national protection, and game shooting, whereby the unlimited spread of these guns, starts with it destabilizing powers that add to various worldwide or domestic issues. Direct access to guns, for instance, undermines human security by making and supporting a culture of brutality whereby social identities and social cooperation become tangled with the use and ownership of weapons as well as the propagation of gun deaths (Grillot, 2011).

It is difficult to stop the spreading of the guns. The global standards prevent individuals to implement firearm control laws due to people’s rights. The global models have assumed a specific role linked to the research on human rights, the environment, regional honesty, apartheid, as well as sovereignty.Kopel, D. B. (2016). Background checks for firearms sales and loans: law, history, and policy. Harv. J. on Legis., 53, 303. This paper discusses how firearm control laws can spare individuals’ life. The easy access to weapons is responsible for the huge numbers of cases like school gun battles. Particularly the 1999 Columbine High School killings, the 2007 shootings at Virginia Tech, and the 2011 Tucson massacre has pushed the debate on gun laws further into public perception (Kopel, 2016). The social and political parties still argue over the topic of how much firearm control is suitable. In the perspective of social science, the contentions concern the relevance of gun control policies in relation to decreasing brutal crime (Kopel, 2016). Therefore, strict gun control policies will help lessen the crime rate. Various restrictions that states have enacted or proposed into law are background investigations and waiting phases for people who need to buy a gun, management of concealment laws, secondary market sales regulation, bans on lightweight and small firearms, prevention laws linked to child access, and compulsory child safety locks. Furthermore, nations can adopt more strict policies on guns to lower gun deaths.Li, X. (2014). A Framing Comparison of the United States and Hong Kong: Individualism and Collectivism in the Coverage of the Newtown Mass Shooting (Doctoral dissertation, Ohio University).This work differentiates China from the United States based on firearm control. After the Newtown massacre in the U.S., around the same time of that school shootings, a bothered 36-year-elderly person in China appeared in a primary school and used a knife to go on a frenzy, harming 23 individuals. Nonetheless, nobody passed away. If purchasing a firearm in China was as simple as in America., that disaster could have been more awful than Newtown (Li, 2014). Based on the strict firearm control laws in China, the occurrence did not take away any individual’s life. Compared with China, the U.S. is dependent on weapon culture. Furthermore, there are school frenzies in China, yet the death rate is much lower. The gun deaths rate in China is around one-fourth of that of the U.S. Besides, the main individuals with access to firearms are often groups of thugs (Li, 2014).Karimu, O. O. (2015). The two sides of gun legislation and control debate in the United States of America. European Scientific Journal, 400.This scholarly work notes that the law is intending to reinforce the present gun policies and to diminish gun killings. The necessity to recheck the present gun laws in the nation and close gaps in the current laws has turned out to be earnest bearing in mind that in over of 8,000 Americans have been assessed to have been murdered since the Newtown killings (Karimu,2015). To give the residents a stable, safe, and peaceful society, researchers on gun deaths and firearm control have insisted on the need to close gaps in current policies with the motive of stopping all conceivable supply courses of guns under the control of gangs and criminals as well as onto the streets (Karimu, 2015). As such, the administration needs to develop strict directions associated with gun control policies. 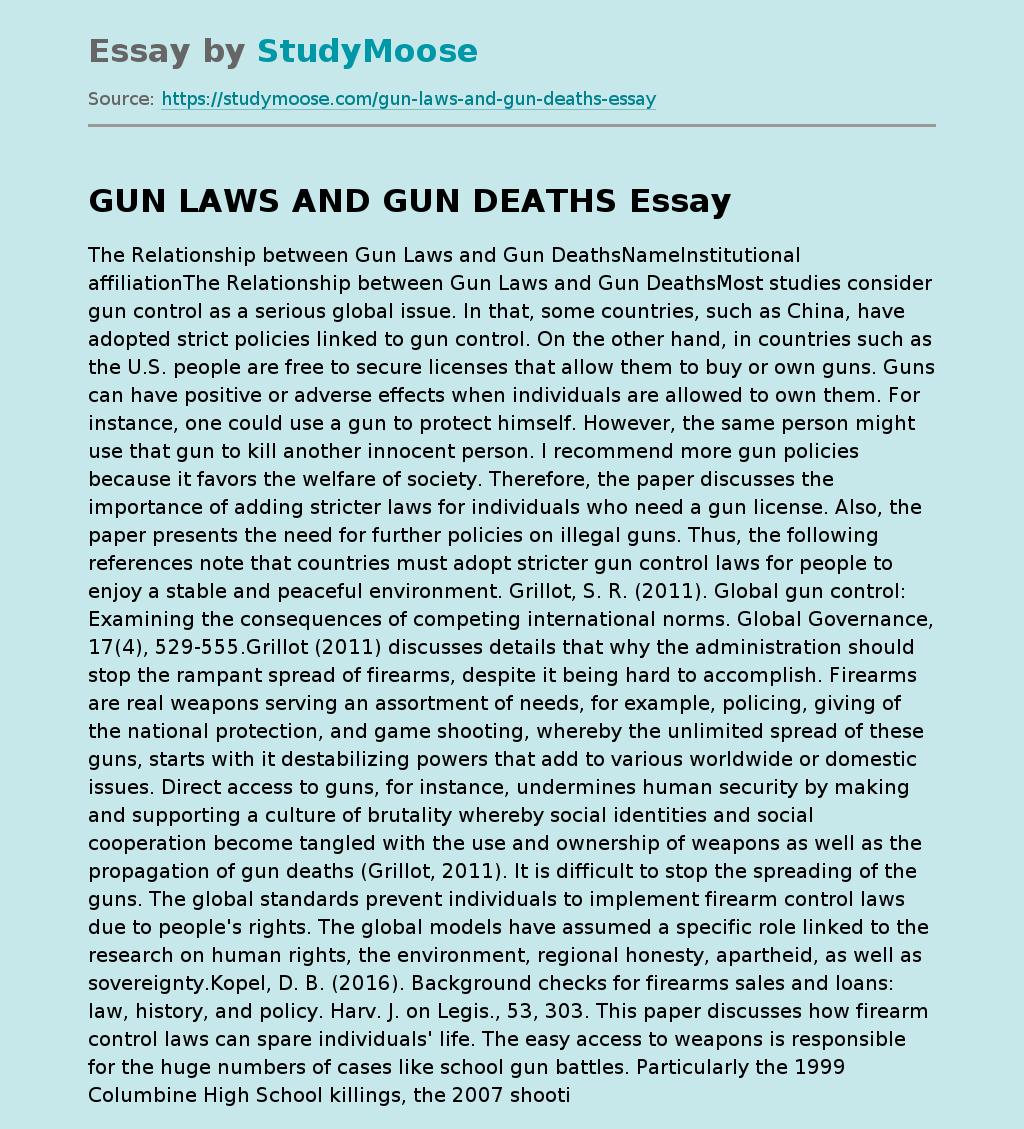