When you hear about all of the tragedies that have occurred over the last few years relating gun violence one of the first things that come to mind is how they can be prevented. Gun regulations could limit the number of shootings and gun related deaths in the United States. If we take guns off the streets to obvious result would be a decline the average number of deaths caused by shootings in the United States per year. This is a serious problem that is the logical thing to do in order to save countless innocent lives each year.

Reducing guns sold to people with criminal records, mental illnesses or to people where it is a safety hazard are the steps that need to be taken in gun regulation.

The United States has the highest gun ownership rate in the world in small arms the ones that are most common kind found in the hand of a civilian. Extremely important people in our nation’s history were killed by a civilian with a gun.

Presidents John F. Kennedy, Abraham Lincoln also Martin Luther King Jr. were assassinated (Doeden 26). The people who committed these offences were seemingly normal everyday people like you and me but the lack of laws and restrictions regarding background checks allow these criminals or the mentally unstable to acquire deadly weapons and cause mass unnecessary death. Gun control has been a political idea since the signing of our constitution. Only a few years after our nation was born New York politician, Rufus King, said “That it was dangerous to put arms into the hands of the frontier people for their defense, lest they should use them against the United States” (qtd.

in Doeden 17). The political, ethnical and constitutional debates of gun control have been going on for over two hundred years. The situation has not become any more resolved over that time because the debates continue to this day.

There is a clear relation to gun control and safety of our friends and family. The lack of strong gun regulation laws in the United States endangers the safety of innocent citizens. In December of 2012 a lone gunman went on a shooting rampage and killed 20 first graders and six staff members of a Sandy Hook elementary school in Newtown Connecticut. The gunman was armed with two semi-automatic hand guns and an assault rifle (Bagne). In the weeks after gun sales spiked which is not the result that was expected and holds a problem in its self. The way to maintain safety in and around our neighborhood is not to have everyone stockpile guns. If this is the mindset of the American people then something needs to be done. Gun restrictions will allow people to go through their everyday lives with a priceless feeling of safety for them and their family. The necessity of caution when someone wants to acquire and firearm is immense. If there is no gun sold into a potentially life threatening situation such as a home with many children or with someone who has a history of violent acts then the chance of an incident involving a firearm is severely reduced.

In order to reduce armed crime in the United States we must apply more powerful gun control regulations. Vice president Joe Biden is one of the most involved and dedicated politicians on the gun control issue. He is trying to reduce armed violence by creating a strict background check policy for anyone trying to purchase or register a gun .The objective of Biden’s campaign is to reduce the risks that are associated with a criminal being able to purchase a firearm with intent to use the weapon unlawfully. In the last year after the Newtown Connecticut shootings there have been more than 5,200 people killed with a gun in the United States (Feldmann).

Mass gun related deaths in the United States unfortunately are not an uncommon occurrence. “In October 2002, John Allen Muhammad and Lee Boyd Malvo used a Bushmaster assault rifle in a three weak sniping spree to murder ten people and injure three others in Washington D.C, Maryland and Virginia”(Carter). The point made in the article was that if gun restrictions and regulations were tighter there may have been a chance that the police would have been able to identify the shooters much sooner if they were able to match the bullet casing to the gun and its owners. The situation of armed crime has only gotten worse over the decade since this tragedy and as of right now there is no sign of improvement on the gun control policies in the United States.

The occurrences of mass shootings in the United States in many cases can be related to the mental health of the people who were able to obtain and use these weapons. The Sandy Hook massacre was because a man who was mentally unstable was able to take his mother’s weapons shoots her then proceeds on the elementary school where he killed the innocent children and teachers (Bagne). Laws need to be put in place in order to protect our nation from tragedies like this. If there are regulations prevention the purchase of a gun in a home where there is someone who is not mentally stable and can access the guns.

An alternate relation between and mental stability comes from the aftermath. After Sandy Hook many counselors were sent to schools around the country to try and allow students to cope with what had recently happened in Connecticut. Regardless if the students were at Sandy Hook or not there were people who suffered and were traumatized by this event. Gun regulations need to be put in place to prevent guns reaching the hands of people who are mentally unstable and to prevent mass shootings in order to preserve the innocence of the next generation.

Gun regulations have become a very controversial issue over the years, but the amount of preventable and unnecessary death in the United States should be enough to force congress into passing laws on this issue. The rise in armed crime, the safety of our citizens’ minds and bodies should be a top priority. The only way to eliminate these factors is to reduce the amount of guns in the hands of people who should not be handling them. 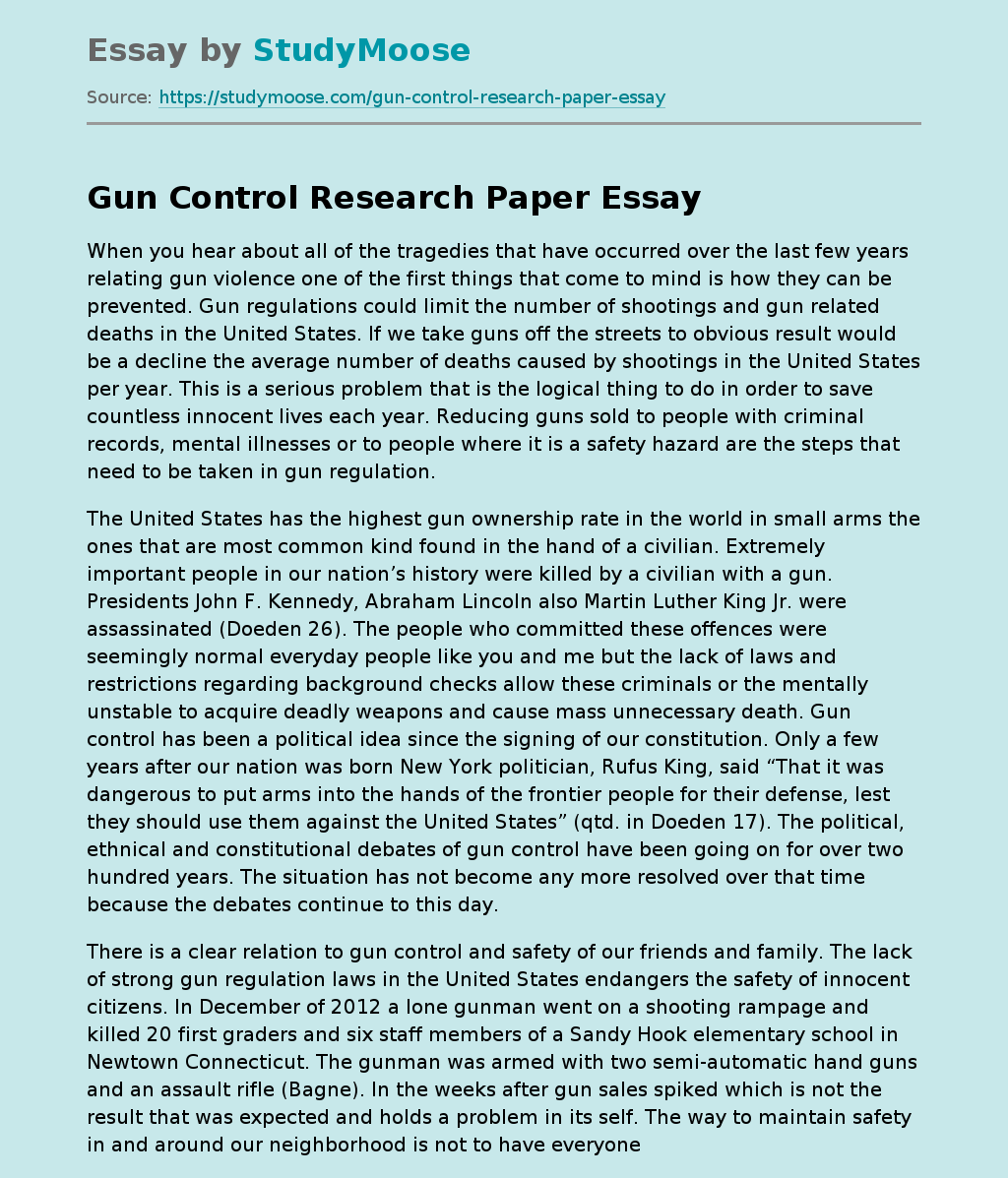