The notion of gun control has been a subject of great debate for many years. People have argued to have gun control better regulated or more strict due to the risk of accidental or malicious death. Others have debated reducing gun control laws, citing the Constitutional right protected by the Second Amendment as well as the use of firearms to protect one’s life and property. Statistical data has been used again and again to contest the issue in both directions, for and against.

Don't use plagiarized sources. Get your custom essay on
“ Gun Control Discussion ”
Get custom paper
NEW! smart matching with writer

Greater gun control is unnecessary. Having a gun does not necessarily that the majority of deaths that occur in the United States is from injury related to using one. As gun control is already regulated, firearms are essential in the reduction of crimes. Furthermore, having ease of access to firearms makes a defense of ourselves and others easier, thereby curbing the crime rate. People may feel safer having access to a weapon such as a gun in order to protect themselves from future threats like robbery or assault.

Guns themselves do not kill people; people kill people. Murder can be the result of any kind of object used as a weapon, therefore guns do not present themselves as being more like to cause death than a baseball bat.

Certainly, the capacity of a particular weapon to make a homicidal attack possible-its range is an element of any definition of weapon dangerousness. But no available experience statistics indicate how many attacks with weapon A would not have been attacks at all if weapon B and not weapon A were available. (Zimring, p.724-725).

Statistical evidence in the following chart also demonstrates that the presence of guns does not correlate with their lethal capabilities.

This chart clearly shows that despite over 80 guns are owned per 100 people (Fig. 1) in the United States (bringing in a total of 8,000 firearms), the mortality rate due to guns is low. There are under 20 deaths from gun-related incidents shown on this chart. This demonstrates a lack of connection between gun ownership and gun deaths. As such, why would greater gun control laws be needed when the death rate is so low? As a final point, it has been proven that gun control laws themselves have little to no impact on the rate of violence that results from gun use. Lost gun control restrictions generally have no net effect on violence rates.” (Kleck and Patterson, p. 249).

Looking at this chart, over the past forty years, with the rise of handgun ownership the rate of crime in the United States has dropped significantly by the year 1997. It is clear that guns are a real threat to would-be criminals, and as such the crime rate has been reduced. There would be no point in regulating guns further than they already are considering these results.

Finally, guns make people feel safe. The majority of people who own firearms buy them to protect themselves and their families.

The chart above shows the statistics from 2017 when people were surveyed about their motives for buying a gun. As seen in the chart, 67% possessed a gun “For protection.” (Fig. 3) Safety is a priority held by all people. Buying a weapon such as a handgun ensures safety against threats that a knife or a blunt object could not always be relied on to stop. As such, if gun control laws were made more strict, people would not be able to defend themselves and their loved one with such assurance and ease as they have now. Furthermore, as shown previously guns reduce crime so the ability of guns to make people safe are very real.

Gun regulation laws are fine as they are. They do not need to be made stricter. There is no connection between having a gun and an increased rate of death from gun violence. Guns and firearms reduce criminal activity; many criminals will not attempt a crime on the risk of encountering someone who is armed. The safety of self and others is also a factor in gun ownership. With guns being able to reduce crime, human beings are safe having firearms. 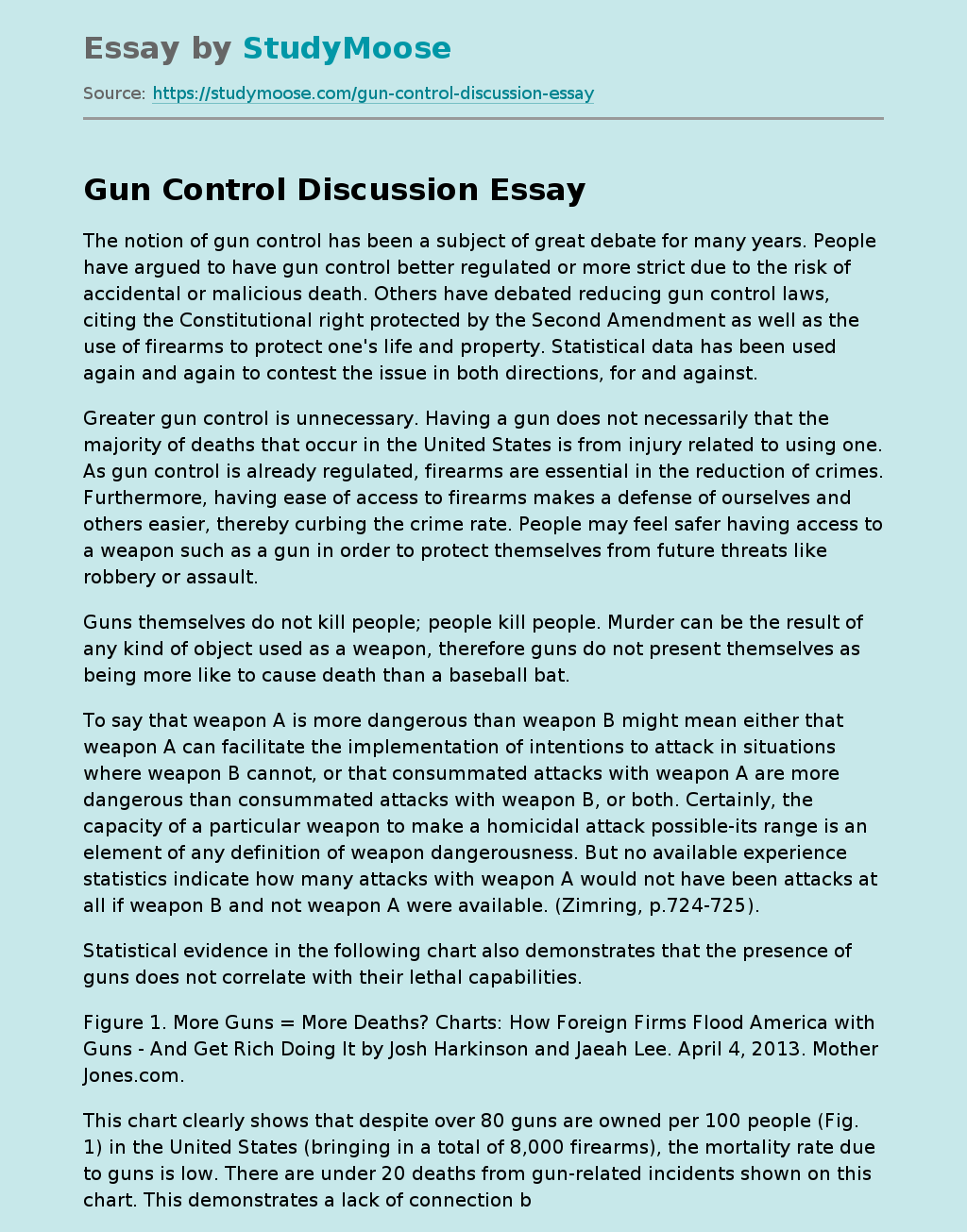