What America Can Learn From Other Countries’ Gun Control Laws

The imperative debate over gun control has sparked an immense amount of attention and media attraction from the events that occurred February 14, 2018. Considered one of the deadliest school massacres in the world with a death toll of 17 and 14 severely injured, the Marjory Stoneman Douglas High School shooting has caused heated controversy between gun supporters and anti-gun activists.

The suspect Nikolas Cruz, a former student at Marjory Stoneman Douglas High School, is believed to have suffered from a history of ADHD, Depression, and Autism (McCausland, Phil).

Don't use plagiarized sources. Get your custom essay on
“ What America Can Learn From Other Countries’ Gun Control Laws ”
Get custom paper
NEW! smart matching with writer

The correlation between mental illness and mass killings is significant enough that an analysis of 235 killings with the aid of a firearm, reported 22 percent of the culprits were considered to be mentally ill (Qiu and Bank). While mental illness is not the deciding factor that determines whether a massacre will be committed, it is a commonality amongst other mass homicides in the United States.

Dr. James C. Ballenger, the court-appointed psychiatrist for Roof’s case, noted that he had shown symptoms of mental illnesses such as Autistic Spectrum Disorder and Schizoid Personality Disorder (Sack, Kevin).

Adam Lanza, the 20-year old who was responsible for the Sandy Hook Elementary School shooting, was another individual affected by some type of mental disorder. While receiving treatment at the Yale Child Study Center, his psychiatrist had prescribed him the medications Lexapro and Celexa; both used to treat depression and mood and anxiety disorders (ablechild.

Despite the evidence of the link between mass shootings and mental health, the issue of gun control is just as large of a factor. Advocates for gun control have exclaimed students should not fear their lives going to school, attending a concert, or activities where massacres should not occur. Information regarding mass shootings was gathered for 2015, where it displayed out of the 336 days accounted for that year, there were 355 mass shootings; on average, about 1 per day (Lopez, German).

The United States has become so accustomed to the thought that mass shootings have become a commonly accepted fate of civilians, hoping a massacre does not occur while at a shopping mall, school, concerts, or churches. America has a population of approximately 326 million people, almost 4.4 percent of the world population, but has almost half of civilian-owned guns around the world with 42 percent. The easy access to guns of immense power such as an AR-15, a similar style that was used in both the Sandy Hook shooting and the Stoneman Douglas shooting, has been argued that change needs to transpire now, or it never will.

The United States is not the only country who has faced an issue with mass shootings. The difference between America and these other countries are the strategies they implemented to prevent a mass shooting of such large scale occurring again. Australia faced their worst mass shooting in 1996, when Martin Bryant opened fire on a shopping mall resulting in 35 deaths. Since then, they have reformed their gun control by enforcing a stricter licensing and registration system, mandating people interested in owning a gun explain the reason why. Since the mass shooting that occurred 20 years ago in Port Arthur, Tasmania, there have been none since (portguardian.com).

Switzerland is among the world’s highest ratios of firearms per civilian with 45.7 firearms per 100 people. The only two countries with a higher ratio are Yemen and the United States with an astonishing 88.8 guns for every 100 people. Male Swiss citizens are required to have conscription which allows them to keep their semiautomatic assault rifles at home after returning from the military, however, to purchase firearms themselves, a weeks-long background check is necessary. With the help of background checks and conscripts, Swiss authorities also have recorded a list of individuals likely to commit massacres where they are confronted by authorities and psychologists who then seize their weapons or ban the suspects from purchasing new firearms (Noack, Rick).

Another country that successfully reformed their gun control and drastically decreased their mass shootings is Germany. Although their population in 2014 was 1.4 million, the legal weapons registered total a number of 5.5 million. Their homicide rate is as low as .05 percent compared to the United States with a mere 3.4 percent. While it is apparent neither of these rates are high, Germany has taken action when massacres occurred, unlike the United States. Laws were passed after a student killed 16 of his peers and faculty members at his school in 2002. Any person applying for their first firearms license under the age of 25 is required to undergo a psychiatric evaluation with a trained counselor specifically targeted to test personality and behavior.

In 2008, officials passed regulations creating a blocking mechanism on firearms that were inherited from relatives and in 2013 a national gun register was established for the first time, making it more difficult for people to own multiple weapons at a time. Not only has Germany generated laws to avert another mass shooting, but they funded in-school psychologists and trained teachers that act as trusted personnel in the instance a child felt they or someone they knew were in danger (theguardian.com). Psychologists and trained professionals are sure to be attentive and take precaution when dealing with a heavy issue, especially involving children which is not commonly seen in the United States.

Nikolas Cruz, a child ostracized for his odd behavior, was bullied and isolated. With students feeling they do not have the resources or ability to confide in teachers or faculty, a possibility for a child like Nikolas to get revenge becomes a reality. A student and former pupil of Cruz’s named Manolo Alvarez said “I regret definitely not saying anything” (Brown, Julie).

Gun control is an arduous topic argued about by Americans across the country, either in favor of it or against it. The frequency of shootings occurring in the United States has become so normalized, students are wearing translucent backpacks to class to prevent concealed weapons being brought into schools. America is modernized and constantly advancing in terms of medicine and technology, but when discussing the topic of innocent civilian lives’ at hand, it is often dismissed by certain politicians and organizations who blame it on a single individual, not accepting how easily it is to purchase and own such grand weapons of mass destruction. By globalizing with other countries like Germany or Australia, we can adapt new regulations that can end the indecent crimes committed on students, teachers, and loved ones.

What America Can Learn From Other Countries’ Gun Control Laws. (2021, Dec 07). Retrieved from https://studymoose.com/what-america-can-learn-from-other-countries-gun-control-laws-essay 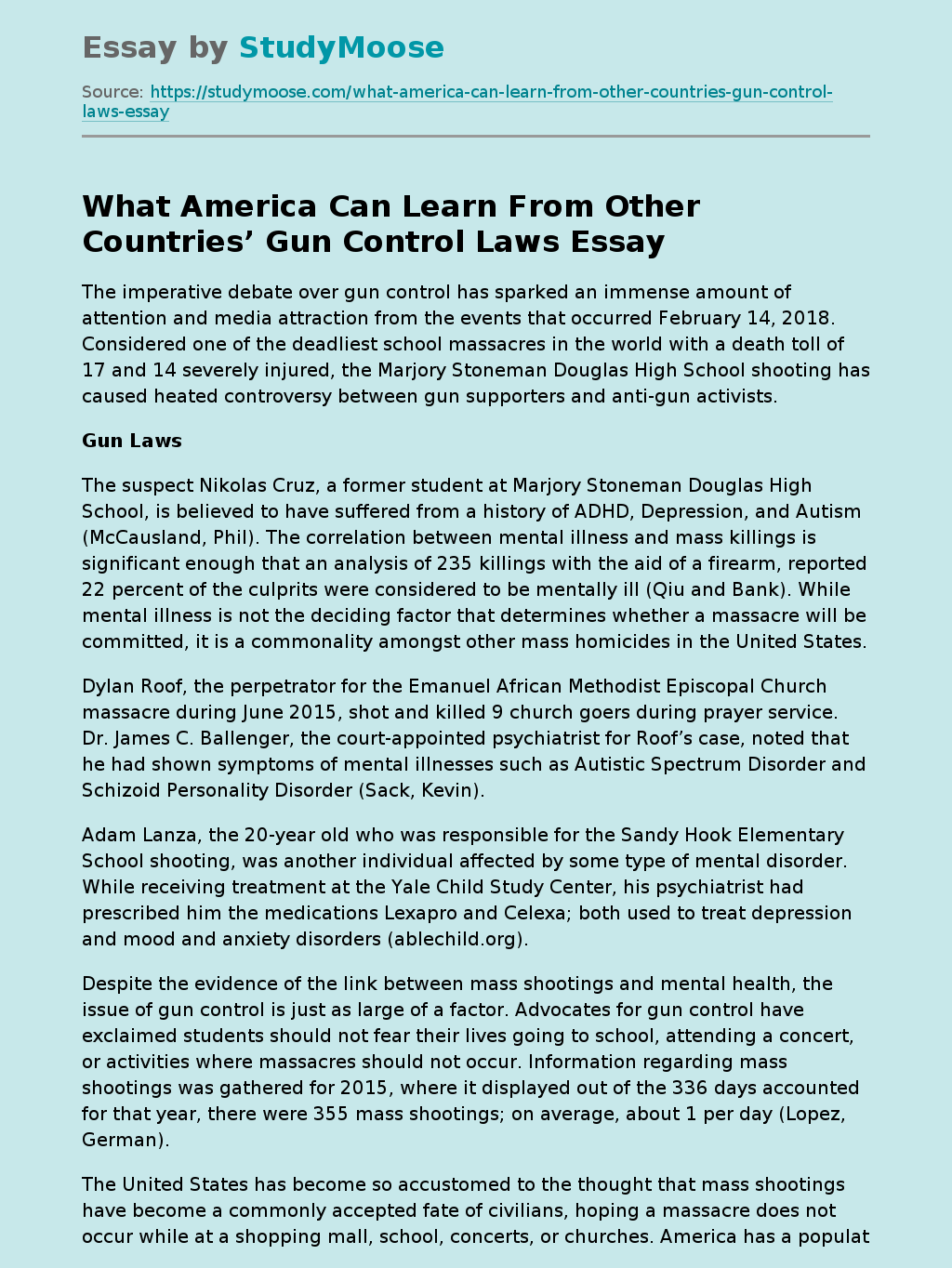