Islam is not only one of the three major monotheistic religions in the world today, it is also it is the fastest growing. Additionally, political conflict between Islamic groups and the West play out on the international stage like the latest of the Crusades. The message of the Prophet Mohammad has been distorted and misunderstood by those outside of Islam who see only a religion of hatred. Islam did, however, emerge in battle, conquering by force much of the Middle East and North Africa.

Don't use plagiarized sources. Get your custom essay on
“ Spread of Islam ”
Get custom paper
NEW! smart matching with writer

The rapid spread of Islam, both politically and as a religion, is remarkable. It is therefore fundamental to understand Islam on its own terms, its creation and spread from the Arabian Peninsula in the Seventh century. Esposito (1999) notes that although it was “distant” from the centers of power in the Near East, “Arabia was not isolated” (p. 4).

The people who lived there were “aware of and affected by political, economic, and cultural developments” that surrounded them, including religion (p.

4). Christianity, Judaism, and Zoroastrianism were the main religions, in addition to “local animist cults” (p. 4). Mecca, where Mohammad first experienced Allah, was “unmistakably a pagan milieu” that had only small traces of the “religion of Abraham” (Peters, 1994, p. 1). Arabs at the time were polytheistic had had “developed little in the way of a religious mythology” (Cook, 1996, p. 9). According to Cook (1996), Mohammad belonged to the Quraysh tribe in Mecca, sometime around 570 CE (p. 12, 14). At the age of 40, on Mount Hira, Islam believes the angel Gabriel visited Mohammad, out of which came the Quran (p.

15). Over the next fifteen years, Mohammad developed the ritual of five times of daily prayer and the basics of Islamic morality (p. 16). While he gained numerous converts in Mecca, it was only after a period of thirteen years that “God ordered it to make it public, and it rapidly acquired a local following, and became the talk of Arabia” (p. 16).

At first, local pagans tolerated this new religion, “until Mohammad began to disparage the local pagan gods” (p. 16). Islam was a “blunt repudiation” of many traditional ways of belief (Esposito, 1999, p. 8). However, Mohammad gained important converts among the rich and influential of Meccan society, including Abu Bakr (Peters, 1994, p. 153). Islam gained a strong following among Mohammad’s family and tribe, but less so among rival tribes (Cook, 1996, p. 17). Political rivalries forced Mohammad to turn to other tribes for protection, finally finding refuge in Medina. “Like Mecca, [Medina] lacked central authority. Unlike Mecca, it was disturbed by recurrent civil strife” which “were to give Mohammad his opening” (p. 18). Mohammad’s move to Medina in 622 is the hijira, the beginning of the Muslim era (p. 19). In Medina, Mohammad created “a political order,” the consolidation of community under his leadership (p. 20).

Mohammad’s political and religious authority was then spread through warfare. Following his death in 632, leadership fell to Abu Bakr, the first caliph. According to Sicker (2000), the various scattered tribes of the Arabian Peninsula “had engaged in virtually perpetual warfare and raiding” for nearly a thousand years (p. 10). With the coming of Islam, Muslims were forbidden to wage war on one another. Many of these tribes were “heavily dependent on brigandage” for economic survival (p. 10). Under Abu Bakr, these tribes were allowed to raid outside of Muslim lands. Islam, then, can be said to have spread via the sword. Religious conversion only followed after military conquest. Shortly before the hijira, Mohammad had a revelation from God that permitted him to wage war. According to Cook (1996), jihad, or “war against the unbelievers” is permitted and encouraged by the Quran. “God not only permits it, He orders it to be waged till His cause prevails” (p. 54).

Mohammad’s great success lay in combining religion and politics. From Medina, Mohammad’s empire spread outward quickly. “The astonishing extent and rapidity of this process of expansion and conquest can only be understood if the nature of the expansion it represented is recognized” (Esposito, 1999, p. 13). The caliphs built an empire between the Aral Sea and the Atlantic Ocean. Islam, however, “was at first the religion of the imperial elite and of the Arab conquering forces settled in garrison towns and cities throughout the empire” (Esposito, 1999, p. 350). The ruling elite of Medina was able to gather large armies “composed mainly of pastoral nomads” (p. 13). These armies marched forth and established the early Islamic centers, yet they lived apart and avoided assimilation. Within a decade after the death of Mohammad, “all the lands of the Fertile Crescent, Iraq, Syria, and Palestine and Egypt” were under Islamic domination (Kennedy, 2001, p. 2).

However, it took several centuries for Islam as a religion to spread to the masses of the Arabian Peninsula. “As late as the tenth century…Islam was still the religion of urban elites and of only some peasant and Bedouin elements” (p. 350). With the creation of this new empire, the entire Arabian Peninsula changed. With the overthrow of the old political order, the new caliphs “redistributed” wealth “on a grand scale” (p. 13). Following military conquest, there was a corresponding migration of Arab tribes (Kennedy, 2001, p. 4). It was under the leadership of Caliph Umar (634-44) that this pattern of garrison settlement emerged. Tribal identities “remained strong” in these islands of Islam (p. 7). Indeed, the success of Islam led to its outward spread. The invasion and conquest of Egypt was fueled, according to Sicker (2000), by the “explosive” growth of Mecca and Medina and the need to control Egyptian grain (p. 14).

In 661, the capital of the growing Muslim empire moved from Medina to Damascus under the Caliph Muawiya (p. 22). This was the beginning of the Umayyad Empire, which would conquer the Byzantine Empire, stretch into Spain, and spread Islam from the Atlantic to India. Mohammad created a dynamic religion that spread outward quickly, with its command to convert the world. While not in the Quran, early Muslim tradition, according to Cook (1996), had a vision of the future. At some point in the future, Islam would break into “a mass of conflicting sects” (p. 41). In order to redeem mankind, God will send the Mahdi, a descendent of Mohammad, who will emigrate to Jerusalem and “reign in justice” (p. 41).

In less than a decade, however, the Antichrist will arise in Iraq, “reducing the Muslims to a remnant” making their “last stand” on Syrian mountain (p. 41). Jesus will then descend from Heaven, save the Muslims, destroy the Christians, and lead humanity towards the end of the world (p. 41). Islam now stretches around the world, and continues to attract converts. The goal of jihad, as revealed to Mohammad, was to spread Islam to every soul. The ideal world, then, would be one in which everyone was a Muslim. The struggle to redeem the goals of Islam from those who would kill in its name continues to preoccupy Western perceptions of Islam. Westerners cannot dismiss Islam. Its rapid spread out of Arabia, and its continued growth mark it as a global force.

Spread of Islam. (2016, May 07). Retrieved from https://studymoose.com/spread-of-islam-essay 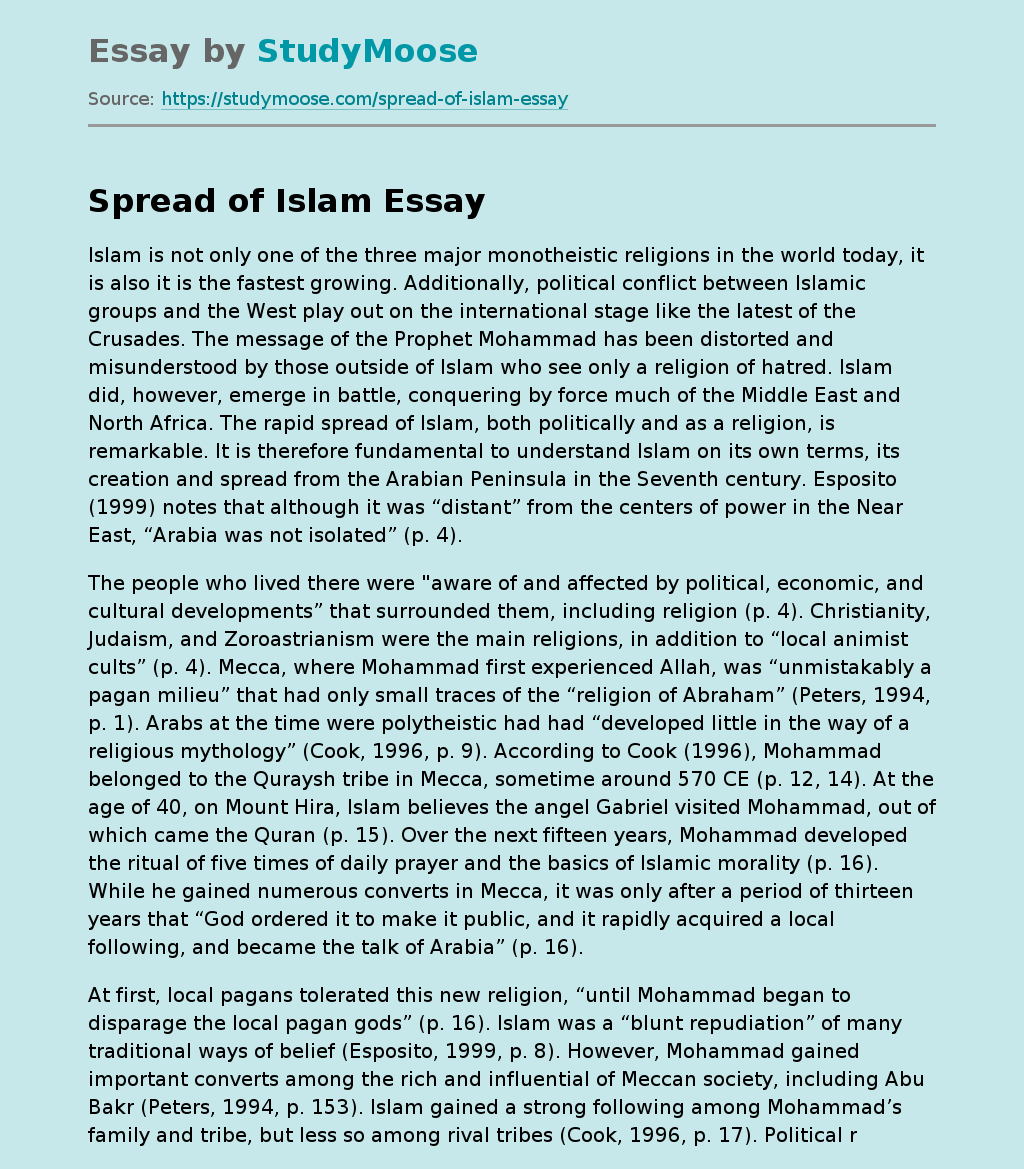