Moawia had five days to decide. Should be open a fruit juice business in the Al Ain Mall or continue as the operating manager at the Al Qatara bowling alley in the Al Ain Club? He had been very successful running big bowling tournaments attended by people from all over the Gulf region and had saved enough money to start his own business. Was this the right one?

Al Ain was a town of 300,000 people in the center of the Abu Dhabi Emirate, the largest and richest of the seven emirates that are collectively known as the United Arab Emirates (UAE).

The United Arab Emirates University was in Al Ain, with a student enrolment of 13,000 UAE nationals, the total population of Al Ain was comprised of 40 per cent UAE nationals and 60 percent expatriates. Before 2002, there were no malls in the city and people would have to travel to Dubai to shop. It was March of 2002 and the Al Ain Mall management planned to open the mall soon and was accepting business proposals for the food court to be built on the second floor.

He proposed to offer customers freshly squeezed fruit juices mixed with homemade soft ice cream. The mall management accepted his business proposal. Moawai gathered the financial data required to open the store and now had five days to accept the mall’s offer to lease the space.

The Al Ain Mall, like all retail malls, charged rent to businesses depending on the number of square meters the business occupied. Mall tenants paid anywhere from DH2,000 to DH4,000 per square meter per year. The rate depended upon how well-known and how big the company was. Megamart and the home center paid at the lower end of the scale, 2,000, whereas small independent stores paid closer to 4,000. Sombrero would have to pay DH60,000 per year to lease the space. Mall lease agreements were generally for five years and required the tenant, in addition to the lease cost, to pay for electricity, water, mall maintenance and security.

Water and electricity were estimated at DH800 per month; maintenance and security would cost DH700 per month. The mall only leased the space. Moawia would have to put down the flooring the build the walls and ceiling as well as install lighting and air conditioning. These leasehold improvement costs would be an asset of the business to be depreciated over the five years of the lease. Total leasehold improvement costs were estimated at DH 12,000 at the end of the year.

Moawia would name his store Sombrero in memory of his roommate in Poland who came from Bolivia. His friend brought with him a huge Mexican sombrero hat and guitar which he would use to entertain friends with his playing and signing of latin American songs. The sore would operate 98 hours per week and employ four people full-time working nine hour shifts. Two employees would work the 10 a.m. until 3 p.m. and the 8 p.m. until 12 midnight shifts. The other two would work from 2 p.m. until midnight with one hour off. Each employee would be paid DH1,200 per month plus accommodation costing DH400 per month.

Sombrero would serve a freshly squeezed fruit drink mixed with Ice cream. There would be 30 varieties of fruit cocktails offered by Sombrero. The ice cream would be made on site by mixing an ice cream powder with water in the ice-making machine that slowly mixes the product at about minus 28 degrees Celsius. Soft ice cream would then be poured out of the tap at the bottom of the machine. The ice cream could then be mixed with the different types of fruit drinks. The average customer order would be DH10. The fruit would cost about DH 1.20, the ice cream powder about 35 fils and the cup for serving the juice another 45 fils including the paper abd straw accessories.

Moawia must decide whether to go ahead and start his business. He felt a little afraid because he did not know how many customers he would have to have for the year to cover all his costs and he profitable. He would also like to make a profit of DH 30,000 for his first year and wondered how many customers he would need to make that profit. His real concern was the ability of Sombrero to do enough business to pay all its bills and not go bankrupt. 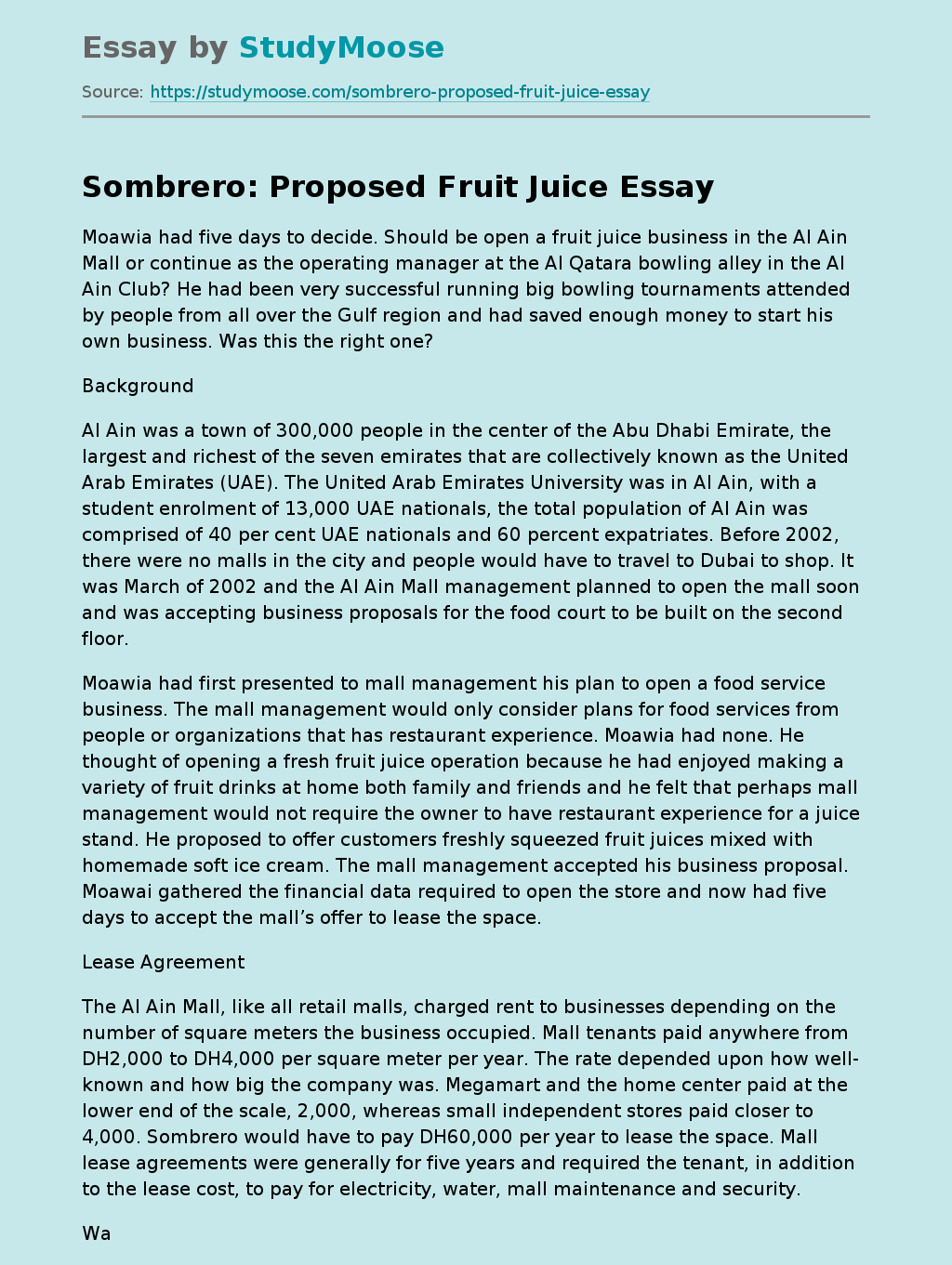