Sociology - Crime in Trinidad and Tobago

In Trinidad and Tobago, crime has always been a major topic of public and political debate. It is often seen as a sign of underlying problems in society which is related to inequality, social deprivation, social class, gender and age. Although Durkheim (1938, first published in 1895) argued that crime is an inevitable and normal aspect of life, people continue to perceive the Caribbean as a place that is growing increasingly dangerous, and these fears can have devastating consequences on citizens regardless of age or sex.

Don't use plagiarized sources. Get your custom essay on
“ Sociology – Crime in Trinidad and Tobago ”
Get custom paper
NEW! smart matching with writer

Over the past few decades, crime has continued to increase in every category including murders, rapes, assaults, robberies, burglaries and thefts. These crime rates in the Caribbean have been found to be higher than in any other region of the world, and are significantly above the world average. The media is one of the main sources of mass communication which provides us with information. Advances in technology and globalization have brought the world to one’s fingertips with easy access to the internet and other forms of mass communication.

However, this rise in the development of the media has coincided with the rise in popularity of ‘criminal’ television programs, access to cable, electronic games and the internet. As such, individuals are connected to more violence and this increases fear among people based on what they have observed via the media. This is supported by O’Keefe (1987), who indicated that greater attention to televised news was related to subsequent increased fear, concern and avoidance behavior.

In this situation, the public’s perceptions of behaviors or groups of persons are tainted as the media coverage greatly exaggerates their potential for harm to the larger society.

This generates further anxiety and fear of crime among the population and may result in people altering their ways of life. Fear of crime is defined as an emotional reaction characterized by a sense of danger and anxiety produced by the threat of physical harm.

Reed (1998) emphasizes that it is a serious individual and community level problem, influencing people’s ability to move freely from place to place on a regular basis. Generally, for a person to experience fear of crime, that individual had to be a victim of crime. However, one can also encounter fear of crime if one’s spouse, family members, friends, colleagues or neighbors had experiences of criminal victimization, as the opinions of ‘significant others’ are important in shaping an individual’s lifestyle (Moriarty 1988).

Stafford (2007) argues that fear of crime impacts the quality of life of the individual and results in a restriction of one’s lifestyle. This poor quality of life causes people to alter their routine or the way they live their daily lives. Hence, persons may limit how many times they leave their home, the places which they visit and the time when they go about their business. As such, individuals who experience a greater fear of crime tend to adopt a constrained lifestyle in an effort to reduce their probability of being victimized.

As a result of avoidance and restriction in response to fear of crime, people also tend to limit their physical activity, take less exercise and limit their social activities (Stafford 2007). Therefore, they are less likely to engage in outdoor activities such as walking and cycling and this ultimately reduces the number of opportunities for them to form social ties within the community.

Furthermore, the inactivity that results when persons change their lifestyle in respond to crime, impacts their physical and mental health increasing their risk of cardiovascular disease, and their overall psychological well-being and mental functioning. Crime in a community can affect the economic growth of society and can prevent both domestic and foreign investments to the economy. Within a community, employers who fear crime may close their businesses earlier to ensure the safety of both themselves and their customers and people may restrict entertainment at night for the same reason.

Since the curfew has been implemented for a specific time period in Trinidad and Tobago,many businesses in the heart of Port-of-Spain like night clubs and food outlets have had a great lost of income. This have causes businesses to lose out on sales and their profits will be reduced. Crime also results in great costs to the public resulting in stolen goods, loss of lives, security spending, pain and suffering. As such, fear of crime motivates people to invest time and money in defensive measures to reduce their vulnerability.

Sociology - Crime in Trinidad and Tobago. (2016, Nov 12). Retrieved from http://studymoose.com/sociology-crime-in-trinidad-and-tobago-essay 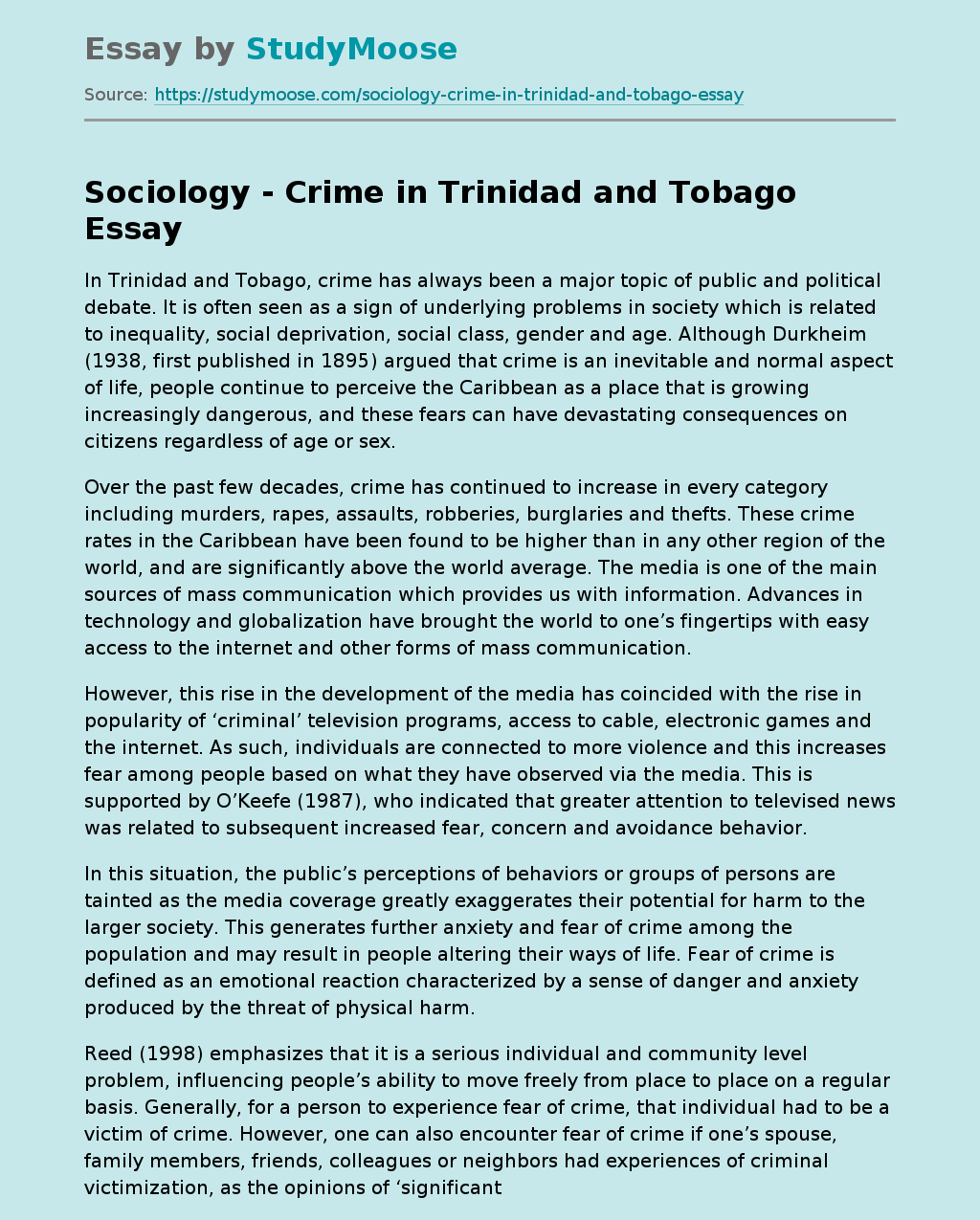