The importance of economics Essay

Because we live in an economy it is important to study economics, simply because economics affects everyone. We are part of an economics system, where every day we engage in economic activities. Economics helps us to appreciate that the earth’s resources are limited in comparison to human beings want, which are infinite, and constantly changing along with technology and people’s taste and preference. This excess of wants over what can actually be produced with the limited resources, brings about the basic economic problem of scarcity.

Don't use plagiarized sources.
Get Your Custom Essay on The importance of economics Just from $13,9/Page

Scarcity brings about the choice of what to produce, how the commodity is to be produced and who gets to consume the finished good(s) and/service(s). Economics is important to those involved in economics activities which are everyone: individuals/households, firms/businesses and government when it comes to making these choices. It helps us when making such choices, from the businesses trying to make a profit to the consumers seeking to get more for less and the government trying to obtain welfare for its citizens.

Economics helps us when making decisions about the allocation of such scarce resources so as to best satisfy the needs and wants of individual within an economy. Without going too much into it, economics can calculate the degree of inequality within an economy and helps us understand ways and measures taken to reduce inequality. It also addresses the problem of poverty, how to identify types of poverty, causes and effects of poverty, those most susceptible to poverty and ways to alleviate poverty. 2. What type of economic system does Trinidad and Tobago have?

How does the type of economic system impact what they produce, the quantities and for whom they produce it? Trinidad and Tobago has a mixed economic system, this type of economic system combines the features of a planned economy and a free market economy, therefore; economic decisions are taken via the price mechanism system and some collectively by the state. There is both a private sector as well as a public sector. Privately owned firms operate in the private sector and are profit driven and aim to minimize cost. The economic decision on what to produce is based on the price mechanism. A higher price for a good pulls

more resources into the production of that good, whereas; a lower price diverts resources elsewhere. The decision on how the commodity is to be produce is based on the cost of the factor of production, their availability and their productivity. The decisions with regards to, for whom the product will be produced is based on who wants to buy the good and whether the consumer can pay the price. The public sector just as in the planned economy, the decisions of what to produce, how to produce it and for whom to produce are based on what the government thinks is best for the economy and the people.

This sector is usually in charge of the provision of those goods and services which may not be appropriately provided under the price system. what to produce decisions are based on what is best for the consumers, how to produce decisions are often based on employment considerations i. e. firms in the public sector might employ large amounts of labour even though such labour is inefficient or more expensive than capital. This is because government wishes to maintain employment levels.

For whom to produce is based on the unsatisfied needs of different groups in society. Under the mixed economic system the economy benefits from identical advantages enjoyed by a free market economy, whilst retaining most of the benefits of the planned economy. According to the law of demand which states that, ceteribus paribus (‘assuming all else is held constant’), the quantity demanded for a good decrease as the price rises. In other words, the quantity demanded and price is inversely related. Hence, the higher the price, the lower the quantity demanded.

As illustrated in the graph, as the price of fruits increases in Trinidad and Tobago the quantity demanded decreases, because less people would be willing to spend more of their disposable income for fruits at a higher price and would chose to substitute fruits for a cheaper good or omit fruits completely from their basket of goods. This causes in an upward movement in the demand curve for fruits. The law of supply states that, all other factors being equal, as the price of a good or service increases, the quantity of goods or services offered by suppliers increases and vice versa.

This would now cause the market to be at a disequilibrium price and quantity. Consumers are not willing and able to purchases fruits with the increase in price. Therefore, suppliers in attempts to get rid of their fruits would be forced to lower their prices to avoid their goods going bad; given that fruits are perishable goods i. e. they have limited shelf time. Suppliers then would reduce the price for their fruits which in turn would increases the demand. Hence eventually demand and supply would meet at equilibrium, at a price consumers are able and willing to pay for fruits and suppliers are willing to supply their goods for.

The importance of economics. (2016, Jul 23). Retrieved from https://studymoose.com/the-importance-of-economics-essay 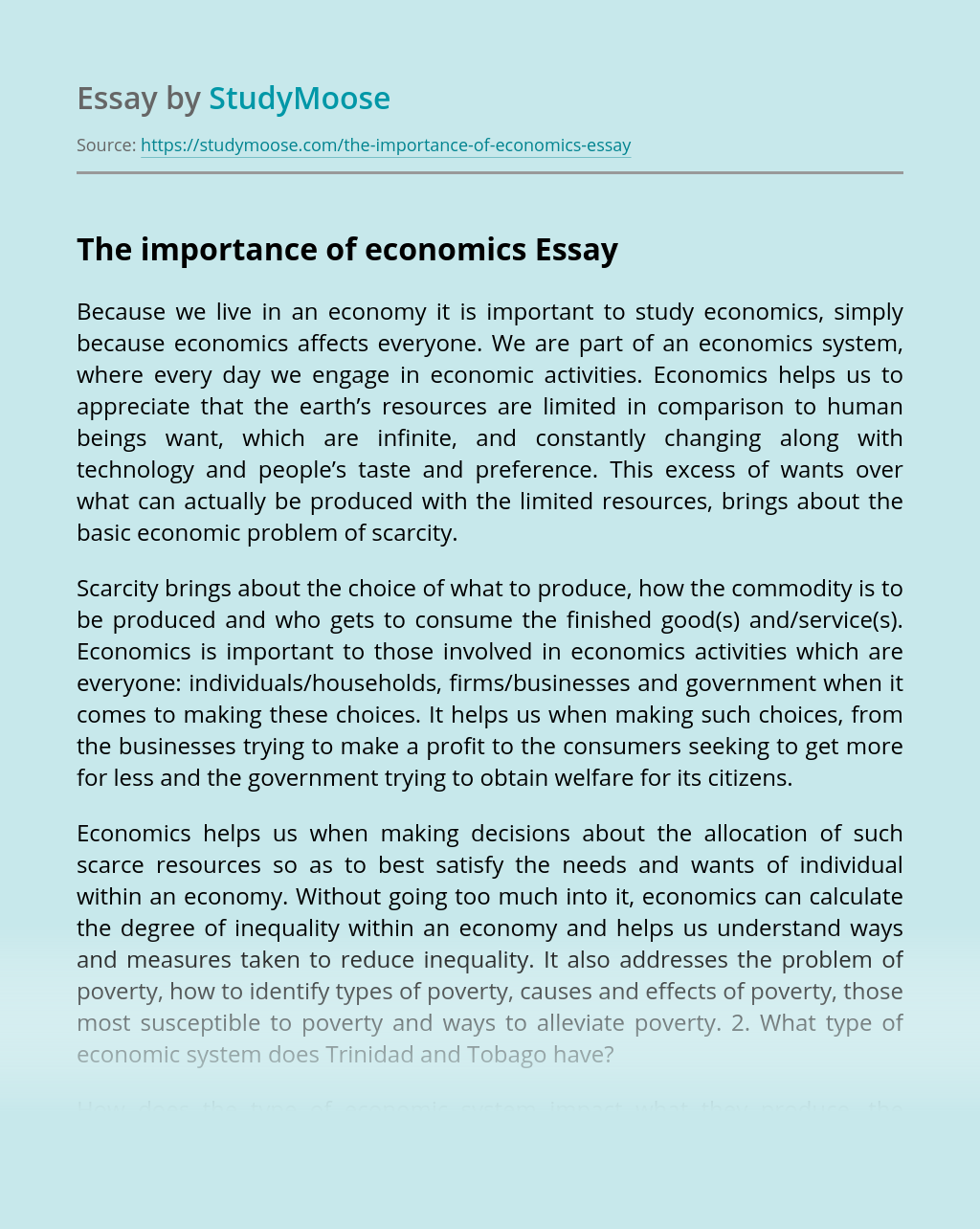 Squatting is an issue that has been pestering Jamaica for several years and with the necessary law and treatments implemented, we have actually grown to seeing this concern steering back at us. Taylor (2012) claimed that squatter settlements motivate theft of public service and nonstandard behaviour, which is obvious of the various thefts of electricity... VIEW ESSAY

International trade is the exchange of goods and services and capital between countries and territories without much obstruction. This relatively new concept has flourished over the years (in different forms) and continues to grow as a result of the many benefits it has offered to different countries across the globe. Significant portion of countries’ gross... VIEW ESSAY

View sample
Get Essay
Analysis of the Fashion Industry

Fashion is one of the world’s most important creative industries. It has provided economic thought with a canonical example in theorizing about consumption and conformity. Social thinkers have long treated fashion as a window upon social class and social change. Cultural theorists have focused on fashion to reflect on symbolic meaning and social ideals. Fashion... VIEW ESSAY

The Financing of Health Care Economic Issues Simulation Paper Health care system has evolved tremendously in the last few years, with many changes with the health care laws including but not limited to Universal Health Care, many individuals have choices when it comes to their coverage. According to healthcare. gov, in January of 2015, an... VIEW ESSAY

i think india in 2030 will be very popular place for its historical and mysterical things that can amze any scientist,historian,archeologist,geographers NEW DELHI: India will be world’s third largest economy by 2030 but its energy demand will slow down to 4.5 per cent, global energy giant BP plc (one of the world’s leading international oil... VIEW ESSAY