Society’s fascination on Serial Killers. Buffalo Bill in Silence of the Lambs

The Silence of the Lambs started out as a novel written by Thomas Harris. It received positive acclaim from critics and fellow authors alike. In 1991 it was adapted into a film which was also quit popular, winning five Academy Awards. Many who read the book or watched the movie will have a difficult time forgetting the main antagonist Buffalo Bill. Buffalo Bill was the twisted serial killer who killed women for their skin. Many aspects in Bill’s character make him both memorable and terrifying to the public.

Don't use plagiarized sources. Get your custom essay on
“ Society’s fascination on Serial Killers. Buffalo Bill in Silence of the Lambs ”
Get custom paper
NEW! smart matching with writer

It’s interesting to see how such a haunting character came about. When Thomas Harris constructed Buffalo Bill (also known as Jame Gump) he turned to lives and biographies of real life serial killers. Mainly Ted Bundy and Ed Gein were used for inspiration.

Ted Bundy was one of the coldest killers ever active in America during the 1970’s. He claims to have killed over 30 women1. Besides both killers targeting women they also used a similar technique to lure the women.

There’s a scene in the movie and book where James Gump puts a fake cast on his arm and asks a young woman to help him load an armchair into a truck, once inside the truck she’s trapped and he proceeds to shut the door and drive off.

This is based off some of Bundy’s techniques for luring young women. Bundy was known to wear a fake cast, or imitate some other injury in order to lure unsuspecting women to secluded locations.

2 The most startling similarities are between Buffalo Bill and real world woman skinner Ed Gein. Buffalo Bill shows signs of gender confusion in the novel and movie, this acts as the motivation behind his skinning’s. Gein himself wished he was born a woman instead of a man.

He even considered a sex change operation but never acted on it.3 Ed Gein was not a serial killer per-se since he only has to confirmed victims but the gruesomeness of his crimes is what made him famous for all the wrong reasons. He was well known for his “decorations”, he would dig up fresh graves taking body parts which he kept around the house.4 To deal with his gender disorder he would wear the skin of women over his own and this is a characteristic used in Buffalo Bill’s character. Ed Gein was also the inspiration for other famous movie monsters such as Psycho and The Texas Chainsaw Massacre. It’s clear that the most disturbing aspects of Buffalo Bill’s character are borrowed from the lives of Ted Bundy and Ed Gein.

They are not the only real life killers whose real life crimes influenced parts of this famous movie killer. Gary M. Heidnik kidnapped and held women hostage as sex slaves. 5This is similar to how Buffalo Bill kept his victims in a well. Another notable mention is Edmund Kemper who just like Gump killed his grandparents as a teenager.

A murderer as nightmarish as Jame Gump came about by combining the darkest aspects of some of the most prolific modern killers. He scares the viewers with his twisted nature but this fear is what makes him so unforgettable and the book and film so successful. There must be a reason for the public’s morbid fascination with such dark subject matter. We want to believe that serial killers are not like us. They are evil, demonic creatures and have nothing in common with the average person. But that might be what attracts us to them.

It’s a mix of fear and fascination. It makes you wonder how a person could go to such lengths to play out their sick fantasies. More disturbingly is how they managed to live and do what they did without getting caught for any period of time. How they could commit such horrendous acts then blend right back into society. A good example is John Wayne Gacey who was a married man that managed three KFCs and entertained sick children in hospitals. All the while he murdered 33 teenage boys and men, even burring some of them in his basement. We wonder how these people can switch between being average people and horrendous monsters. Some people may view the idea of making films that draw attention to such individuals and in a way push them into the spotlight as unethical.

There’s always the fear of possible copycat killings. These concerns are unfounded because if a killer is planning to kill it’s been seen too many times that they will do it at any rate. Having one’s curiosity aroused by cold hearted serial killers is not unethical but natural. It’s expected that people will be fascinated by things they don’t understand. Society’s fascination with serial killers is not something new and doesn’t appear to be going anywhere. Hybrid killers like Buffalo Bill in some way capitalize on this fascination. It may seem strange that normal people feel a pull towards such bloody story lines but it’s far from unethical. The unknown and impossible to understand strikes fear but also intriegues.

Society’s fascination on Serial Killers. Buffalo Bill in Silence of the Lambs. (2016, May 10). Retrieved from https://studymoose.com/societys-fascination-on-serial-killers-buffalo-bill-in-silence-of-the-lambs-essay 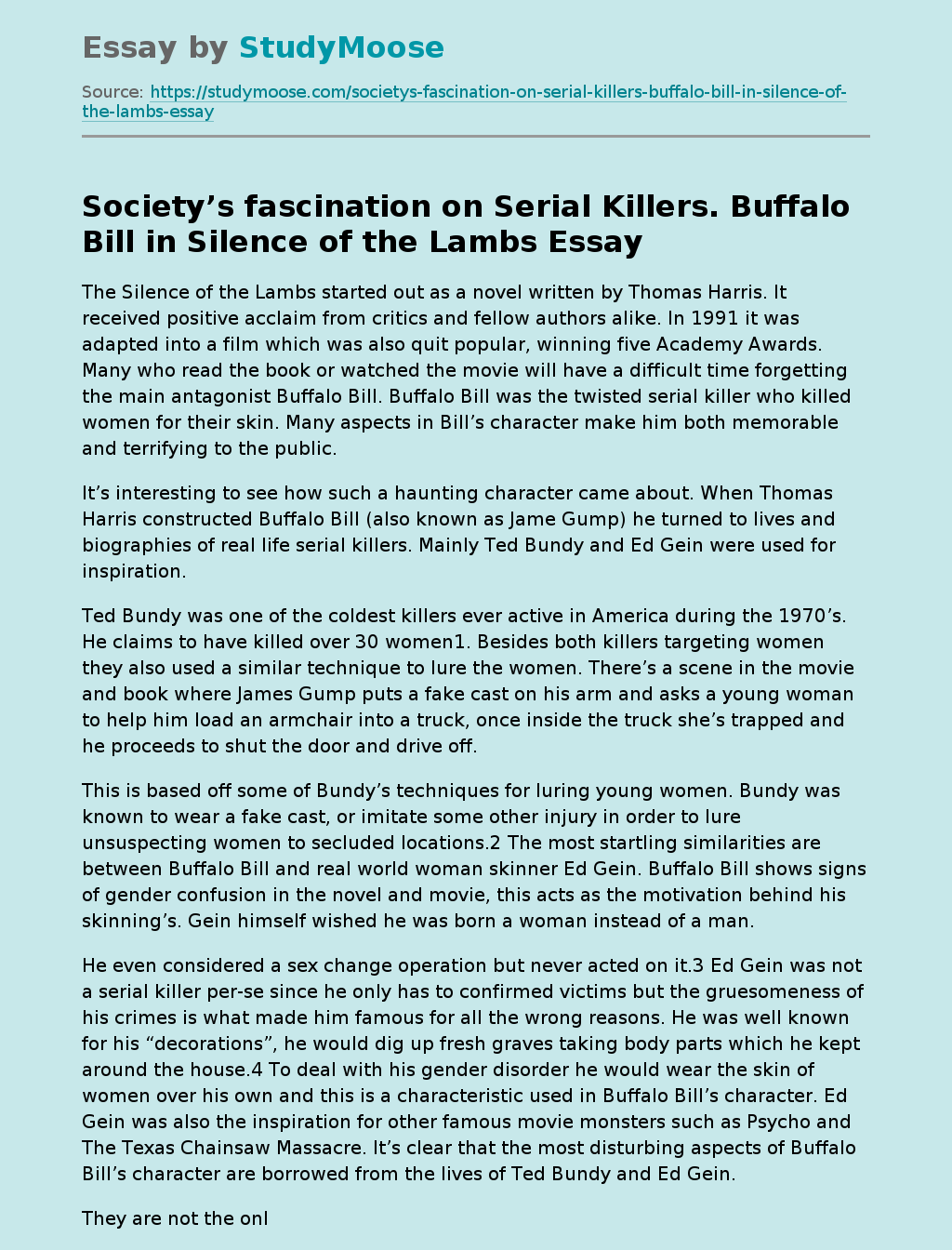