In this essay I plan on explaining the reason for why we do and why we don’t need new sociological theories in postmodern society. Postmodern society is rich in choice, freedom and diversity, this has caused society to fragment and this has led to secularisation. Postmodernity has caused things such as globalisation. Globalisation refers to the growing interconnectedness of societies. As we are now living in a postmodern society many sociologists believe that we need new theories as traditional theories such as Functionalism and Marxism are outdated and are deemed irrelevant to many sociologists.

Don't use plagiarized sources. Get your custom essay on
“ Society Has Now Entered a New, Postmodern Age ”
Get custom paper
NEW! smart matching with writer

Functionalism and Marxism are often described as ‘modernist’ as they explain the findings of modern society, where it follows the industrialisation of the western world. Postmodernists reject the views of the modernist theorists as they claim that they are metanarratives. They believe that sociology needs to develop new theories so we can fully understand postmodern society.

Postmodernity has brought changes from modernity these changes include freedom and choice.

There is also less focus on science, postmodernists reject scientific research methods in their research. Although postmodernists are criticised for being subjective, as they gain meanings. Postmodernists also believe that the truth is relative and a social construction, they are also more political than modernists. Society has changed through the increase in globalisation. Globalisation has created more opportunities for crime to be committed. The dramatic advances in technology has made many different crimes available, this includes fraud. Technology has led postmodernity changing, it has caused changes in the economy as corporate crime is now easier to commit.

Harvey developed a macro theory of socio-economic change, he believed that this was responsible for the emergence of postmodern society. Harvey analysed the labor market and then argued that Fordism set clear bounds of consumption. Harvey claims that postmodernism is another phase of capitalism. He also goes on to say that capitalism has entered a period of adaption where cultural changes the arised. The growth of the mass media has also led to the postmodern world becoming more controlled. The mass media is an ideological function, which manipulates what their audience is able to know. An example of this is in North Korea where the civilians are restricted to certain information. The mass media is now vital in everyday life as it constantly keeps people updated on what is happening the globe.

Baudrillard believes that postmodern society exists by an exchange of images, he named this simulacra. The images are images of things which do not or never existed. He argued that political leaders become themselves through simulacra as they don’t actually possess any power or have the ability to change things from happening. Baudrillard claims that reality has died and that we are left with images. He also sees society as being meaningless, he agrees with Lyotard’s view that society is made up by diversity and boundaries. Beck argues that ‘modern society’ faces new dangers. He claims that society is now in a period of growing industrialisation. He argues that all most all of the threats to the ecosystem are human made rather than from natural disasters.

He claims that the increase in production in modernity has created manufactured risks. However Beck is still sceptical of science, he believes that political action can reduce these manufactured risks. An example of political action is environmentalism. Environmentalism is the concern of preserving the physical environment due to the effects of industrialisation. Marxist theories of the latest stages of capitalism have been explained by Marx and Strachey. Marx’s theory of accumulation fits better than Strachey’s idea that the bourgeoisie are a ‘vision of perfect competition’, however this deviates from the truth. marx’s research failed because there was an error, which is objective.

Stracey believes that capitalism is in a new stage of development, which is characterised by the states management of ownership. In conclusion i believe that the older outdated theories are still relevant to sociology as a whole. The older theories are beneficial as they can be compared. Some of the the research may correlate with postmodern society. It is important to be able to analyse the other theories as they are there for a reason. However I also believe that sociology needs new theories to be able to fully understand postmodernism. There are things that the older theories are not able to explain and that is one of the reason for why we need new sociological theories. Therefore new theories should be developed but that isn’t to say that sociologists can not expand the research of other sociologists. 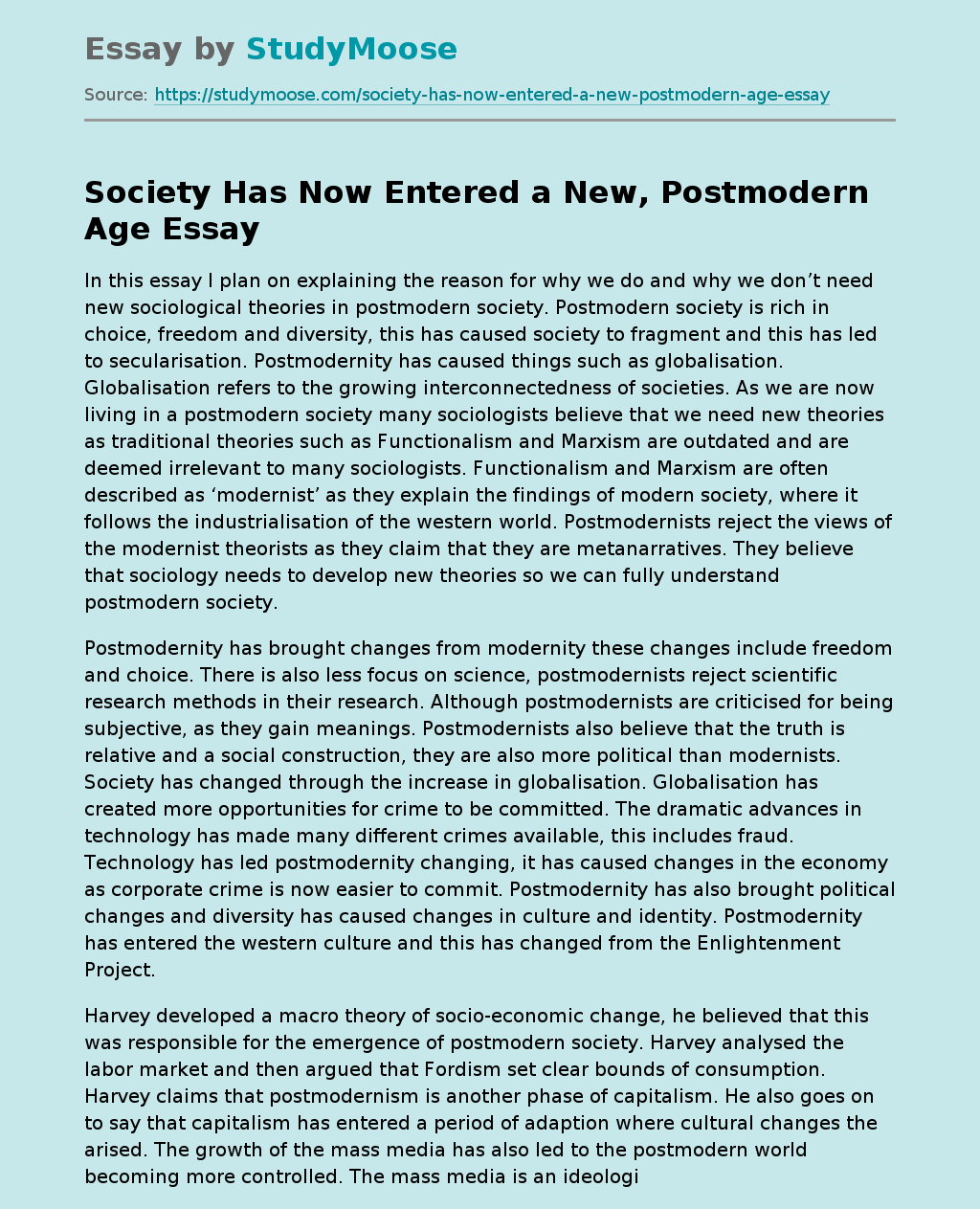