“The Catcher in the Rye”: Late 20th Century Postmodern Strategies of Realism

“The catcher in the rye” is a novel written by American author J.D. Salinger and published for the first time in 1951 and translated in Romanian in 1964. Thus, the predominant theme of the novel is that of the initiatory journey, intertwined with the family theme.

To go from childhood to adulthood is often a difficult transition, but it is a common thing everybody has to experience at one point. Childhood, seen through the eyes of a kid, seems a fantactic adventure, everybody take care of you, you have no worries, and that is the major step you have to take while you go from childhood to becoming an adult.

Don't use plagiarized sources. Get your custom essay on
“ “The Catcher in the Rye”: Late 20th Century Postmodern Strategies of Realism ”
Get custom paper
NEW! smart matching with writer

That is the reason some people tend to keepin mind an enchanting picture of a perfect world. This manner of outsmarting reality is called escapism.

The novel tells the story of Holden Caulfield, an 18-year-old who, because of his psychic problems, he has gotten to be hospitalized in a mental hospital. The major conflict is within Holden’s psyche or consciousness.

A part of him longs to grow up and interract with people as an adult would do. The other part of him tends to reject the world of adults, the “phony”, his “word”, and to shelter into his own reminiscences of infancy and childhood. The insecurity, the desire to escape, the need for control and freedom, accentuates his anxiety and prevents him from finding a balance. Through unsuccessful attempts to socialize in his last days away from home, the teenager wishes to show that he is able to take the risk in society, that he can talk as an adult, that he wants to speak and be listened to, but instead, the more he talks, the more traps get in his way.

All these make it obvious that Holden is by all means an escapist.

The meaning of the title is found in the song Holden listens to and finds himself. Because that ‘catch’ is the last effort to capture innocence and childhood and forbid them to leave. He clearly expressed the desire to remain a child by the statements and reactions he has when he is given the opportunity to explore his sexuality: ‘I do not understand sex. Seriously, I am struggling but damn if I understand.’ Holden is a big kid, a child who is preparing to take ‘the big step’ in the adult world, a world he does not accept and refuses to accept. “The Catcher in the Rye” also symbolize Holden’s dream of becoming the catcher in the rye field, helping children not fall off over the edge of the clifs. By these, he refers to the children as the embodiment of innocence and “falling off the cliff” is the imminent transition to the adult life, the one Holden despises.

What is characteristic to this novel, regarding the posmodernist trend, is the loose structure, the abundance of colloquial language, slangs, vulgar and obscene expressions. American critics Donald P. Costello concludes in his essay that: The language of The Catcher in the Rye is, as we have seen, an authentic artistic rendering of a type of informal, colloquial, teenage American spoken speech. It is strongly typical and trite, yet often somewhat individual it is crude and slangy and impressive, imitative yet occasionally imaginative, and affected toward standardization by the strong efforts of schools. (45 )“Syntactically speaking, Holden’s most striking speech style is the loose structure. This style is compound by the fragments, after-thoughts, abbreviations, and syntactic repetition of certain words and sentences, which can be seen from the following examples”:

“I’m not going to tell you my whole goddam autobiography or anything”.(5)

By using vulgar language, Salinger exceeds the traditional belief about art which considers art forever noble and above this mundane existance. Art is considered by many modernists as a self-sufficient ground, apart from the real world. This is why Salinger novel is against all these standards and was initially classified as controversial. He blurs the actual line between the ideal and the realistic world and while crashing the stereotypes, he blends the differences between the elite and mass society.

A major characteristic of the postmodernism is the representation of the anti-hero. Holden is an anti-hero fighting against literary dogma as well as average culture. Merriam-Webster’s Collegiate Dictionary 11th Edition (1714) defines anti-hero as “a protagonist or notable figure who is conspicuously lacking in heroic qualities.” Holden is not gifted with noble qualities such as bravery or strength but against school, grown ups and the entire society. He is a confused, irresponsible, depressed and anxious young man, as evidenced by the events that he is going through. In just three days in New York City, the phoniness and obscenity he confronts worsen his depression. He discovers that the habitual life of people, not only adults but people his age, revolves around movies and movie stars, lingering in clubs, starting their sex life as early as possible, going to shows, drinking alcohol, dancing, skating, or just doing nothing. He is against to all those mainstream practices and holds to his own believes. As Malcolm Bradbury says, “The “heroes” grow even more disembodied and identityless: characterless characters.”

Another characteristic of the postmodern influences on the novel is that it is written as a narrative, the action being exposed in a chronological order from the point of view of the main character with actual problems, solutions and climaxes. The novel is also a humourless writing, portrating the real world, digging deep into the human psyche but without using humour as a mask. “As writing moves towards silence, the character or author becomes an identityless agent producing text without certainties or plain purpose. Language come closer to babble or gabble, and takes on the nature of an imperfect or obscure memory imcapable of being precisely invoked, meanwhile asking us to consider whether there is identity at all, and how writing comes out of it.”(Bradbury 297)

A quite important theme present in Salinger’s novel is the alienation of the main character. As the action goes forward, Holden is abviously more and more rejected by the society to which he is supposed to accommodate and fit into. He starts telling in an isolated psychiatric hospital.

As he usually tends to claim, he feels trapped on “the other side” (18) of life, and he is in a continuous struggle to give a meaning to his life in a world which excludes him for his very unusual “talents”. Holden is misjudged all the time and that is when he feels the most alienated. He is being kicked out from the school, his parents don’t understand him and neither the circumstances are not even once in his favor.

In conclusion, “The catcher in the rye” it is about the metamorphoses that take place in the soul of an misunderstood teenager. It will remain a manifesto book that treats life in a realistic way. More specifically, the desire to evolve, to provide yourself a different life, a better one and implicitly the mutations that take place in this process.

“The Catcher in the Rye”: Late 20th Century Postmodern Strategies of Realism. (2021, Jan 28). Retrieved from http://studymoose.com/the-catcher-in-the-rye-late-20th-century-postmodern-strategies-of-realism-essay 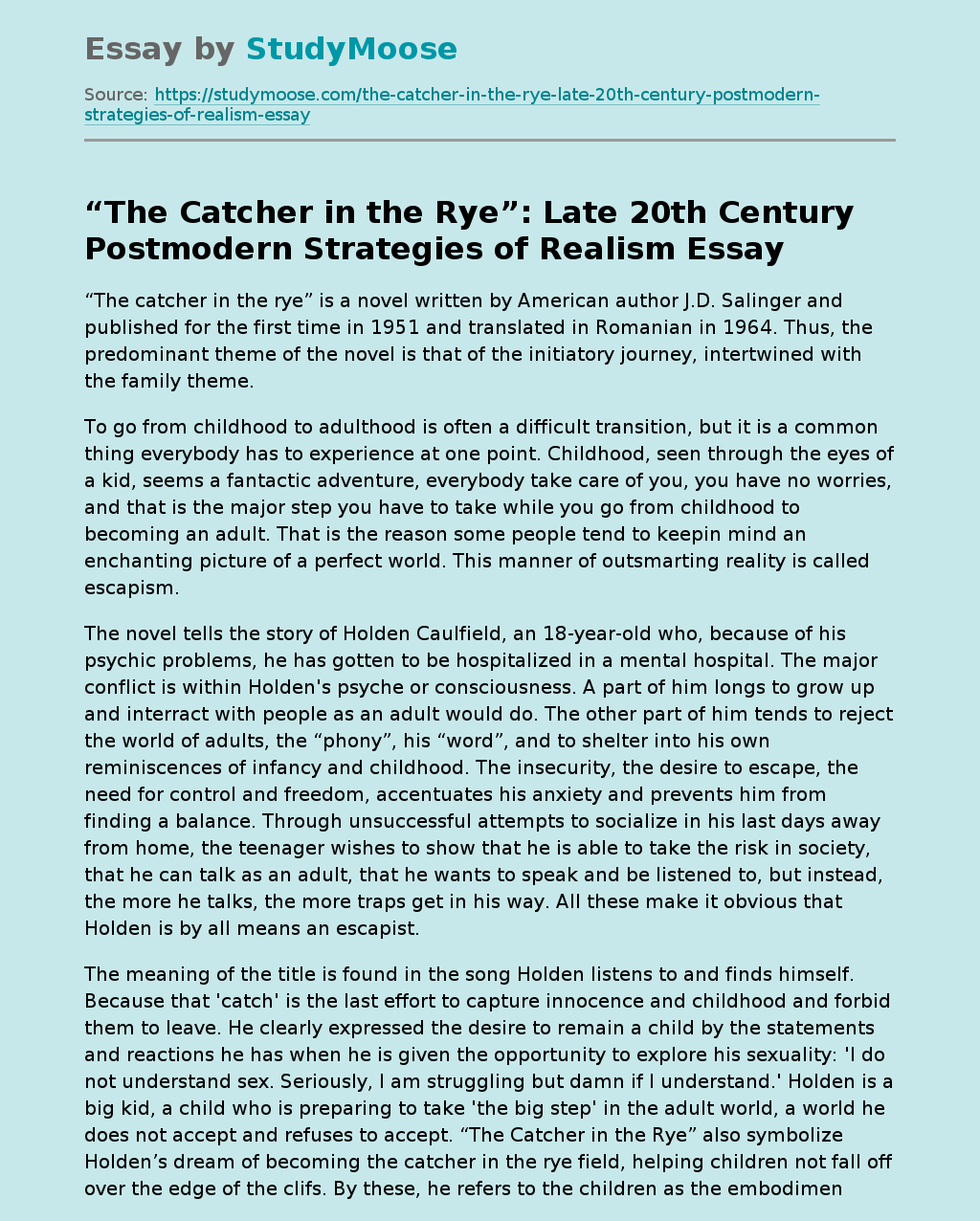