10 Things I Hate About You & Taming of the Shrew: Appropriation

The historical and cultural contexts of Shakespeare’s The Taming of the Shrew (TTS) and the 1999 film 10 Things I Hate About You (10TIH) differ exceptionally, resulting in the film’s expression of values unlike those expressed in Shakespeare’s original text. Shakespeare’s play was written during the Elizabethan era, during which the belief that men were superior to women was prevalent. This concept is centralised in TTS, through incorporation of a disputably misogynistic tone and the dominance of men consequently forcing Katherina into marriage and submission.

Don't use plagiarized sources. Get your custom essay on
“ 10 Things I Hate About You & Taming of the Shrew: Appropriation ”
Get custom paper
NEW! smart matching with writer

In contrast, 10TIH, a modern film appropriation of TTS, largely challenges the values of Shakespeare’s play. It presents to its audience a high school love story appropriate to modern beliefs and sensibilities, emphasising the greater equality between genders and the power of women in the characterisation of the Stratford sisters and their interaction with their respective love interests and father. TTS reflects its 16th century European context in that its central theme is the dominance of men over women and society’s acceptance of it.

Whether Shakespeare intended to ridicule the misogyny and patriarchy of Elizabethan society is irrelevant; however, as his play is concerned with the two, it indicates that the social systems were firmly established. Katherina is forced into marriage that was agreed upon by Petruchio and her father, the governing force of their household. Her objections are nullified in the face of her lesser status as a woman and the authority her father and husband holds over her in age and gender.

Dissimilarly, 10TIH is concerned with the power of women and youth.

A modern film, it is directed towards a target audience of teenagers with modern views- which dramatically changed from the 1960s and onwards with the rise of feminism and youth. In this modern setting, Kat is able to exercise her non-conformist views freely. Though this isolates her from her peers, just as Katherina’s outspoken opinions isolate her, Kat is not oppressed as Katherina is. Kat is influenced by external factors that also contextualise the film’s setting; she mentions feminists Sylvia Plath and Charlotte

Bronte, and is featured reading the former’s novel, Bell Jar, and the film applies ‘riot grrrl’ music ‘of the angry girl variety’, with lyrics such as ‘I don’t give a damn about my bad reputation’ to Kat in order to define her from the opening scene of the movie. That the film includes these elements of feminist material reflects its modern context of a society that is not unfamiliar with feminism. In this area it challenges the original text, where within the context of the Elizabethan era, Katherina’s rejection of her inferiority as a woman is unaccepted and repressed.

As Hortensio mocks: ‘ ‘Mates’, maid? …No mates for you/Unless you were of gentler, milder mould’ (1. 1. 59-60), he manipulates Katherina’s reference to him as a ‘mate’- a crude man- to mean ‘husband’ in an attempt to silence her. Such repression- and that of Katherina at the hands of Petruchio- though exaggerated and outrageous, was acceptable and approved of in the context of Shakespeare’s play. Conversely, in the modern context of 10TIH, where there is greater equality between genders and greater liberty for children, similar repression would be unacceptable.

These liberties are explored when Kat is able to ‘overpower’ her father in situations such as her attendance of Sarah Lawrence College. Here the film challenges the authority of Baptista, Walter’s model; where we see Baptista endorsing subjugation with no acceptance of objection within the Elizabethan context of TTS, Walter eventually recognises Kat’s will, acknowledging: ‘fathers don’t like to admit it when their daughters are capable of running their own lives’.

The film does, however, in keeping with its modern context, suggest that the parent holds a degree of power of the children- a social role parallel to the Elizabethan context of TTS which contributes to Shakespeare’s rendering of Baptista as a domineering father. Nevertheless, Walter is unable to fully control his children’s love lives, with the film utilising his character as comic relief to convey this. In addition, the Stratford daughters ‘date’ rather than marry; these two factors are attributed to the film’s modern context where freedom of romance is valued.

Such a value differs from the Elizabethan standard of having marital relationships set by the men involved- the husband, and the father. The concept of arranged martial relationships in TTS is atypical to the Elizabethan era, where dowries were also set, as seen in Baptista’s offer to Petruchio; ‘…half of my lands/And…twenty thousand crowns. ’ (2. I. 117-118). However, the social context of 10TIH sees the film expressing that the payment for wooing Kat is immoral- as opposed to a similar payment being expected by the husband in the context of TTS.

This aspect of the historical and cultural context of the Elizabethan era is made clear in Petruchio’s enquiry of the dowry- ‘…if I get your daughter’s love, what dowry shall I have…? ’- as it is one of his first lines to Baptista, preceded only by his greeting. Similar to the manner in which it challenges Baptista’s authority, the film challenges Petruchio. Within the context of TTS, Petruchio’s ludicrous metaphoric objectifications of Katherina ‘she is my goods…my anything’ (3. 2. 118-220) are coupled with a firmer ‘I will be master of what is mine own’.

Here he affirms that despite his constant jovial wordplay, he intends to assert his authority. 10TIH however, in keeping with its context of a society that values respect for women, features Patrick’s chivalry in the face of love. He does not assert a claim on Kat as Petruchio does on Katherina; and their love is confirmed at the end, whereas Petruchio and Katherina’s love is debatable. The disputability of their love lies in the final speech of Katherina. She utilises metaphor to express her acceptance of Petruchio’s dominance as her husband; ‘…thy husband is thy lord…thy sovereign’ (5. . 146-147).

Her ‘taming’ reflects Elizabethan society; women that resisted male supremacy were- as was appropriate to the time- acceptably quashed. Approval followed in the words of Vincentio, a representative of society: ‘’Tis a good hearing. ’ (5. 2. 182). Kat’s taming, on the other hand, though also portrayed in good light, is based on the compromising between her and Patrick. They are two equal members in their relationship, unlike Petruchio’s dominance over Katherina after subjecting her to his taming methods and silencing her with his use of anguage.

Language itself is an expression of the contexts of the two texts. The members of Shakespeare’s play use refined speech, and utilise wordplay to reflect their level of status and intelligence. The characters of 10TIH however, speak colloquially and swear, though their usage of wordplay carries similar connotations. Those that manipulate language- such as Kat and Patrick- are seen as intelligent and therefore ‘good’, whereas Joey ‘eat me’ Donner uses simpler language, projecting a poorer image of his character.

This reflects the modern day context of the film; one of a society that respects and values intelligence. Furthermore, whilst characters such as Joey and Bowie Lowenstein are wealthy, they are portrayed as unattractive people, showing that the modern day society in which the film is set does not value wealth as the characters of TTS do within its context, as conveyed by Petruchio’s attraction to Katherina’s wealth as opposed to her person- which, in the Elizabethan era, was not inappropriate as it would be in the context of 10TIH.

Overall, the storyline and themes of The Taming of the Shrew underwent a significant level of adaption for 10 Things I Hate About You. The four hundred years that spanned between the publication of Shakespeare’s play and the premiering of the film appropriation saw changes in social values regarding gender, status and youth that resulted in the film’s modifications of the original text, so as to be appropriate and entertaining to its 20th century teenage viewers; just as Shakespeare expressed the values of the Elizabethan era in order to be appropriate and entertaining to his audience.

10 Things I Hate About You &amp; Taming of the Shrew: Appropriation. (2017, Feb 23). Retrieved from https://studymoose.com/10-things-i-hate-about-you-taming-of-the-shrew-appropriation-essay 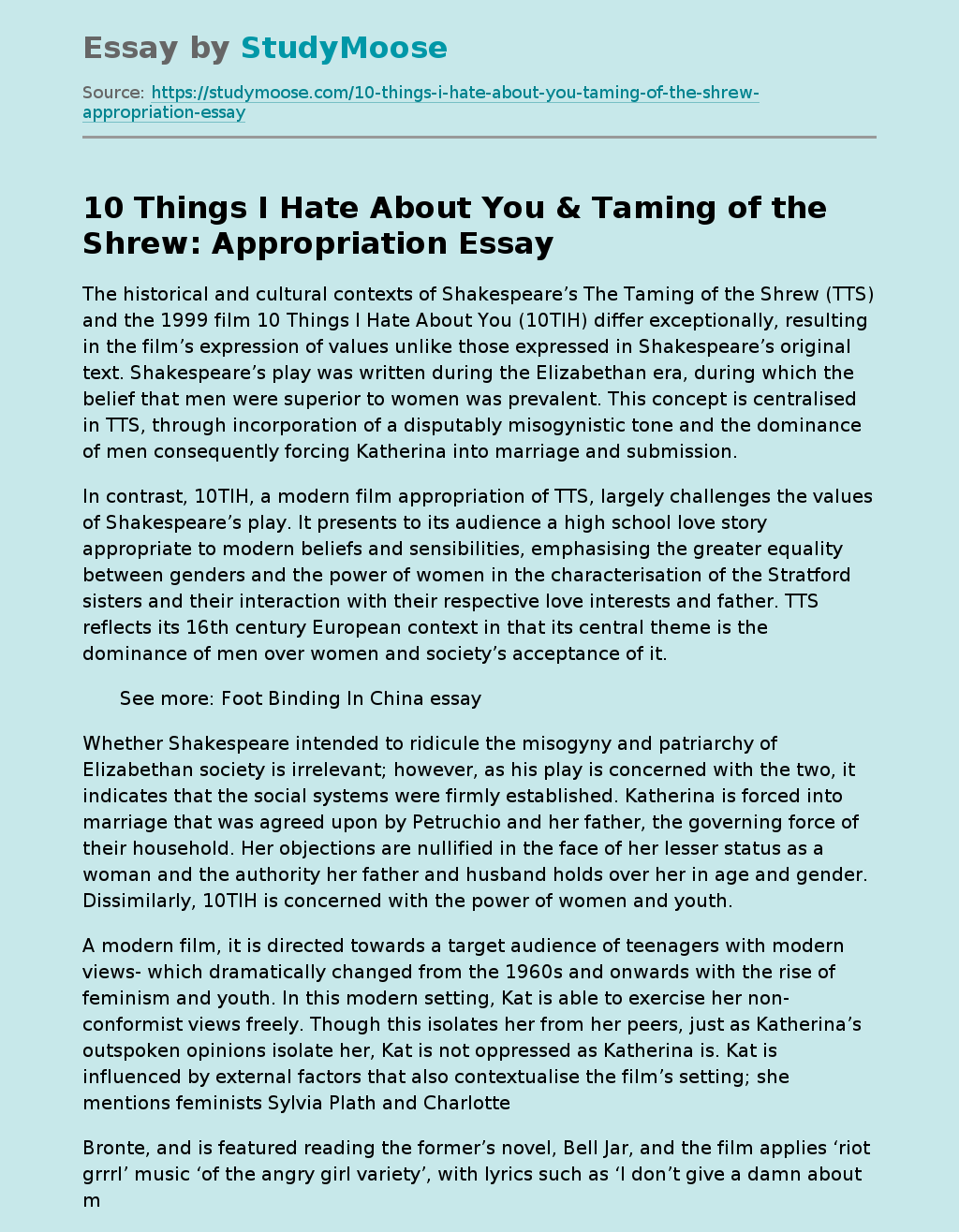