Social Stratification in "The Great Gatsby"

West Eggers are portrayed by Fitzgerald as the ‘new rich’ people who are ostentatious, have made their fortunes too quickly and don’t really have any deep connections and lack aristocratic values. They are characterized by lavish displays of wealth (Gatsby’s mansion). East eggers on the other hand are the old rich who are more aristocratic, and more connected with the traditional values. Having said that though, overall, both east eggers and west eggers are fashionable in their wealth, even thought there might be some difference in traditional values and aristocracy.

Don't use plagiarized sources. Get your custom essay on
“ Social Stratification in “The Great Gatsby” ”
Get custom paper
NEW! smart matching with writer

They both exude a sense of material success and pleasures, habits which are common to both. On the other hand, Valley of Ashes is s stark dark contrast to both east and west egg.

Fitzgerald has depicted social stratification through the contrast of the habits and attitudes the rich (East/West Egg) to those of the poor (Valley of Ashes). This different is clearly evident in the meeting of Tom with George (Page 28).

Tom instantly overpowers him in his domineering attitude whereas George is submissive to his authority. Nick also mentions George as blonde, spiritless man, anemic man. He is physical inferior to Tom’s physically prowess.

Even if the case of women, the rich and poor are stratified. IN the introduction of Baker and Daisy on Page 10, Nick clearly describes the fashionable sense of dressing of Baker and Daisy. Compared with the spotted dress of dark blue crepe de chine, which had no facet or gleam of beauty, dressing shows clear evidence of social stratification between rich and poor.

Other than the rich versus poor stratification, Fitzgerald is also hinting to the gender stratification i.e. how men overpower and abuse women. Page 15 reveals daisy’s annoyance with tom’s physical abuse. She mentions her blue black knuckles and accuses tom of being such a physical brute. Other than physical dominance, psychological dominance over women’s freedom is also apparent. The extended metaphor of women as floating balloons before Tom came in implies their freedom and the slow falling of the balloons once the windows were shut by Tom, implies him controlling women’s freedoms.

Another instance of men’s dominance over women is also seen in how Myrtle’s demeanor changed after having sex with Tom. It’s as if Tom extended some of his vitality to her, after which her attitude changes drastically. Although, this might seem as a positive effect, it’s still a dominance issue nonetheless. In that sense, Fitzgerald is showing the power men hold over women.

Social Stratification in "The Great Gatsby". (2020, Jun 02). Retrieved from https://studymoose.com/social-stratification-great-gatsby-new-essay 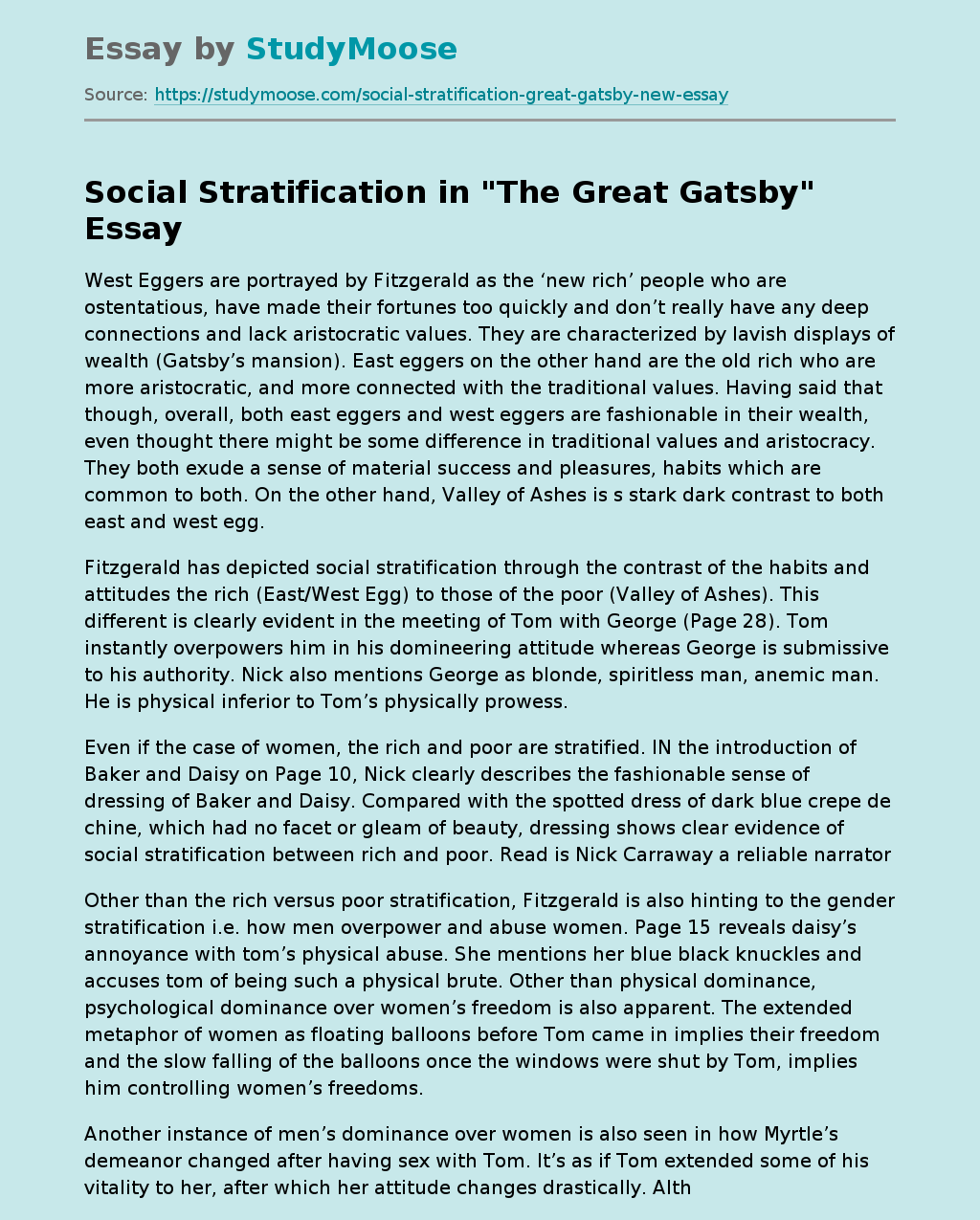