Social Stratification and The Great Gatsby

No matter which facet we view society from we have always been divided by social class. Whether it is wealth, power, or family, the majority of people cannot seem to resist having a prejudice against individuals belonging to a different social class because of one of these aspects. Since the beginning of civilization society has been divided due to wealth, which usually goes hand in hand with power and family. The novel The Great Gatsby is an excellent example of how society is divided into different social classes, known as social stratification.

Don't use plagiarized sources. Get your custom essay on
“ Social Stratification and The Great Gatsby ”
Get custom paper
NEW! smart matching with writer

The theme of social stratification is strong, since the first scene when the narrator, Nick Carraway, enters the room in which his cousin Daisy and her friend Jordan Baker are sitting on a couch. He immediately feels a form of intimidation towards Jordan.

He unconsciously feels that he must apologize to Jordan simply for disturbing her, and even when they are introduced to each other by Daisy. This shows a basic interaction between two individuals divided by social stratification.

Baker is able to intimidate and cause Nick to feel inferior solely because of their difference in social class. It is unfortunate that we judge and divide ourselves because of class, but even the best of us cannot refrain from judging other classes because of the feeling of satisfaction we get when we view ourselves as superior. One of the first indications of social stratification in The Great Gatsby is the division of Long Island into the “West Egg” and “East Egg”.

West Egg is home to what is known as the new rich who had recently gained their fortune, while East Egg is home to aristocratic individuals with many social connections, most of which had been born rich. Individuals from East Egg rarely, if ever, have to work and simply spend their time finding ways to amuse themselves with their inherited wealth. While people from West Egg, since they recently acquired their wealth, must work most days and also comes from a low class background. Therefore those from East Egg would never consider people such as Jay Gatsby like them.

People like Tom and Jordan represent the so called elite of the country, who hold themselves above all other because they were born into wealth. Jay Gatsby on the other hand, represents a man who pursued and achieved the American dream. Gatsby is very wealthy, but he had to work for his wealth. One would assume this would make him socially superior to people such and Jordan and Tom, but in their eyes he is an outcast because he came from a lower class and cannot possibly have the same refinement and taste that they have. Gatsby throws many parties throughout the novel inviting many wealthy and powerful people from all over the area.

During these parties no one feels and inclination to introduce themselves to the host, but enjoys the parties anyways, feasting on Gatsby’s food and liquor. We can assume that no one had a desire to find the host because of the rumors of him being a part of the “new money” social class that it was not worth their time. Many of the wealthy people continue to attend Gatsby’s parties for as long as he throws them, but when Gatsby is murdered none of them attend his funeral. The only people to attend his funeral were his father, Nick, some servants of Gatsby’s, and an old man Nick calls “Owl Eyes”. Obviously even the funeral of Gatsby was too unimportant since he was of the “new money” class, and because the funeral would have no benefit to those attending. This is a suggestion that Gatsby was no different than them because of wealth, but because of the status of his family and social connections.

Another representation of the social stratification in The Great Gatsby is Tom’s mistress Myrtle Wilson. Myrtle comes from one of the lowest of classes in the area in the valley of ashes, and is obviously considered very inferior to the social elitists such as Tom and Jordan. Myrtle wishes to move up in the social hierarchy, and lets Tom use her as a mistress in hopes that he will assist her with her dreams. Myrtle feels no obligations to stay loyal to her husband if it means she can move of the social ladder, and although she does not realize it, she will never be accepted among Tom and his friends because of her social background.

Tom abuses Myrtle by treating her as an object. He treats her as if she is a toy and because of his high social class he feels superior when he is with Myrtle during his affairs. Tom’s affair with Myrtle continues through most of the novel and he feels no remorse for his actions, but when he learns of the affair of Gatsby and Daisy he becomes enraged. Tom feels that because of his class he has every right to cheat on his relationship with Daisy, but no one else has the right do the same to him. The Great Gatsby presents a very clear, yet harsh view on the social stratification of wealth in the early twentieth century. The economy was in a frenzied growth due to the previous war, and because of
the animalistic behavior of the wealthy class, it seemed that Fitzgerald predicted disaster even though he could have had no way in foreseeing the stock market crash in the later years. The wealthy believed that their survival relied solely on the stratification of social classes, such as when Tom spoke of the book he read called The Rise of The Colored Empires. He feared that other races may one day become superior to his own and believed that they must be oppressed so he would not have to give up his feeling of superiority and class. Social stratification still exists in today’s societies, but has definitely experienced a downfall. Future generations should look to The Great Gatsby as an example of the harsh stratification of the past, and use it as a guidebook never to repeat the ignorant mistakes of the past.

Social Stratification and The Great Gatsby. (2016, May 03). Retrieved from https://studymoose.com/social-stratification-and-the-great-gatsby-essay 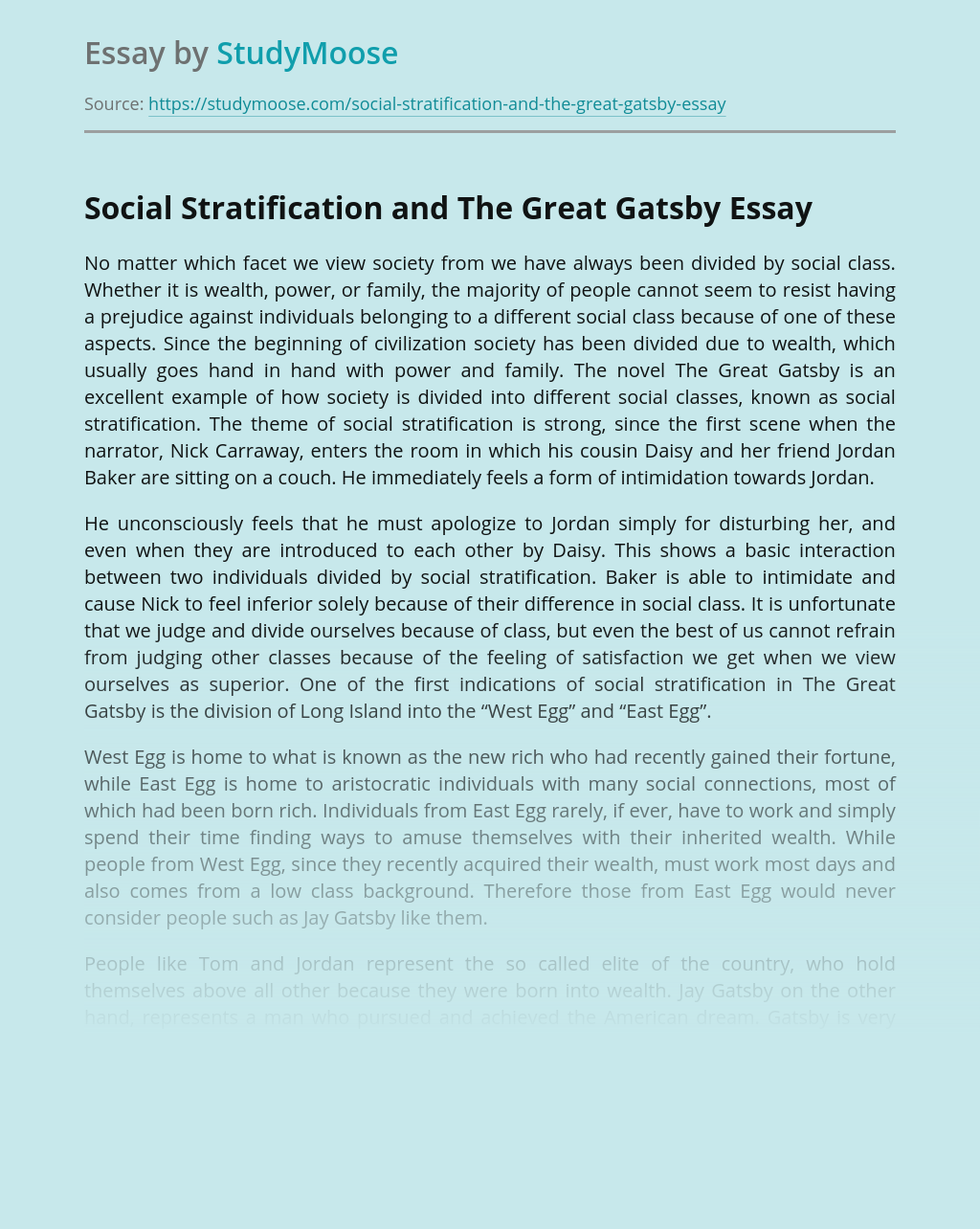